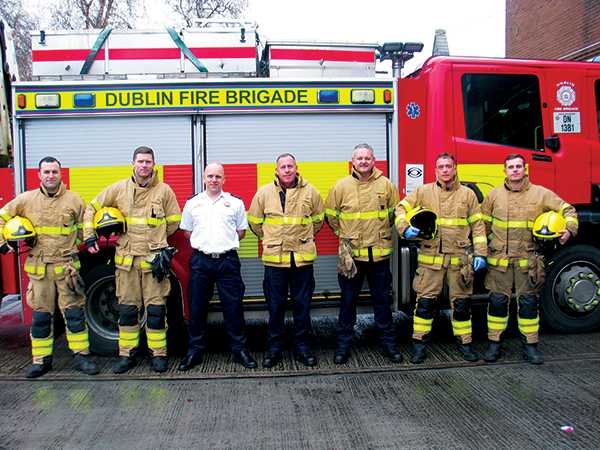 On a cold December day, C Watch in Phibsboro Adam Hyland around.

The day was dull when I went to visit Phibsboro Fire Station recently, but the same could not be said of life for the crew of C Watch here.

As part of Charlie District, Phibsboro station is tasked with handling calls from the north inner city to north west Dublin, providing support for both the Blanchardstown and Finglas stations, so they can expect to be faced with a range of incidents and challenges.

“A normal day isn’t really a normal day, because no two days are the same,” Station Officer Kevin Sheehan tells me. “Some days you can see RTC after RTC, depending on the weather, but we can also see days where we get a lot of calls to the local homeless hostels, where we see the effects of the major drugs issue in the north inner city. We can be extremely busy with overdoses, dealing with unresponsive patients who are still breathing and require a paramedic response. We can do five or six of those calls in a day.”

Because of its location, Phibsboro Station can also respond to river rescue call outs as part of a normal Pre-Determined Attendance from HQ, but the number of specialists in C Watch also means they are in high demand for other incidents.

SPECIAL SKILLSETS
Kevin, who moved to the Phibsboro Station from the OBI in September, and Johnny Eastwood, are both advanced paramedics, and this results in the crews being called out frequently to serious incidents.

“With both of us here there is an extra because paramedic ambulance crews can and do call for an advanced paramedic back-up, and if that’s the case then the truck gets called out. One or the other of us will be called out, because of the skillsets we bring to the incident.”

The Phibsboro crew also includes the DFB’s high line rescue specialists, which again means C Watch are in high demand. “The rescue truck has all of the high line gear for rescues from height – cranes, towers, etc – but we have the only lads here who are trained in this,” Kevin tells me.

“Those calls aren’t that common – usually protesters who have climbed on to a building, or people threatening to jump from buildings – but it is great to have the resources at our fingertips.”

Although the station has been around for a long time and hasn’t seen much in the way of renovation (apart from new gates), it serves the crew well, with the large yard perfect for drills, and the rec room and mess are both cosy and relaxing places for C Watch to unwind. A walk through shows that when able, the crew are relaxed, happy to talk and joke. A welcoming and laughing Mark Keogh takes a moment away from making a cup of tea to pose beside the many badges from other fire departments on display, then the newly-erected Christmas tree.

One unique feature at Phibsboro is the Garden of Reflection, which is also used as a place to unwind. Built by the crews here, it honours DFB members lost over the years, and is always immaculately maintained. “It’s a nice place to go, especially in the summer, and just sit and gather your thoughts after a busy day,” Kevin notes. “In a very built up part of the city, it’s nice to have a secluded and quiet area with a nice water fountain, a few fish, where you can sit and enjoy the peace.”

There is rarely much peace and quiet though, as Kevin tells me. “Your day is normally set out for you, punctuated by call outs. Mornings see daily checks on equipment that can go on until 11am, then you have duties throughout the day. The afternoons are usually spent doing exercises or drills, or familiarisation, because there are so many new builds going up. For instance, the student accommodation in Phibsboro, and then Grangegorman is huge as well. Just getting familiar with that, even just driving around to learn the layout and access to hydrants.” This rising population in this area also adds to the workload for C Watch.

“The high density of the area increases risk factor – Grangegorman has 6,000 people there now, for example – so you have the added risk of high-occupancy apartments. You have to be very careful when you go into those places,” Kevin says.

Despite being so busy, all of the crew seem in good spirits and enjoy a lot of banter that shows how well they obviously get on. That becomes immediately evident when members of the crew return from a call out to find me taking pictures of Kevin, James Courage and Ger Corcoran as they check equipment, and are only too happy to get in on the act and joke about the worthiness of each other.

High line operators Alan Brady, Keith Wilson Dermot O’Reilly are also keen to provide some and go back up the training tower , literally, show me the ropes, while Richie O’Sullivan is “busy hiding” from the camera.

A GREAT TEAM SPIRIT
On any given day, there are usually 13 crew members, as well as the DO and Kevin, and they range in age and years of service. “Paddy Dunne is here a long time,” Kevin tells me, “and he is due to retire in March 2019. We also have to give a hat tip to Gerry Sweeney, who is unfortunately out sick for a long time. He is sorely missed in the station because he really is the life and soul of it. He’s a great guy. He is due to retire soon too. Mark Keogh is probably in 25 years now, so he has given great service too.

“Then we go all the way down to lads who are only here a couple of years. We have two young lads in their 20s – James Courage and Daniel Simpson – both good guys. Even though they are no longer recruits, we still call them that, and will keep doing that until someone newer arrives.” Despite their varied experience, C Watch get on very well with each other, and work together exceptionally well too, as Kevin tells me.

“The camaraderie here is fantastic, and the entire crew are genuinely great. Nothing is ever a problem to them. The Open Day we ran in November, for example, was done just among the on-duty staff at the station, and they were all happy to do it. Anything you ask to be done gets done without any issue.

“They keep the place well, nice and tidy, but particularly on , on the fire ground, nothing is an issue. You ask for anything to be done, or for a piece of equipment to be retrieved, there is never a question, it is just done.”

That work ethic and camaraderie remains strong, despite the fact there has been a lot of changes in personnel over the last few years. “In the last year alone, we have had three lads come in from other stations, as well as two recruits, to replace lads who were promoted from here, and we have a new recruit joining us for his first shift on Christmas Eve night, so welcome to the Fire Brigade! But the camaraderie has always stayed strong, and everybody gets on really well.”

The Open Day Kevin mentions was organised to raise money for the Movember charity campaign for men’s health, and C Watch in Phibsboro is very much the HQ of the Frontline Mo Bros, the group set up and captained by firefighter Jonathan Forbes to help raise funds and awareness for male cancer and mental health issues.

“Johnny does get help from a few regulars, but he almost single-handedly set that up and runs the show, and he does an amazing job of it,” Kevin tells me.

Many of the C Watch crew were sporting impressive on the day, grown out over the course of the month of November, and to see them freshly shaved required a second look to some faces I had previously met. Hundreds of people showed up for the Open Day, and for C Watch, being part of the community is very important.

“The door here is always open and visitors are always welcome,” Kevin says. “Obviously it depends on our schedule, but if someone passes by with their child and they want to have a look, if they want a picture or anything, we would never turn them away.” I’m delighted to say that spirit included my visit, so thanks to all at C Watch Phibsboro for showing me around.