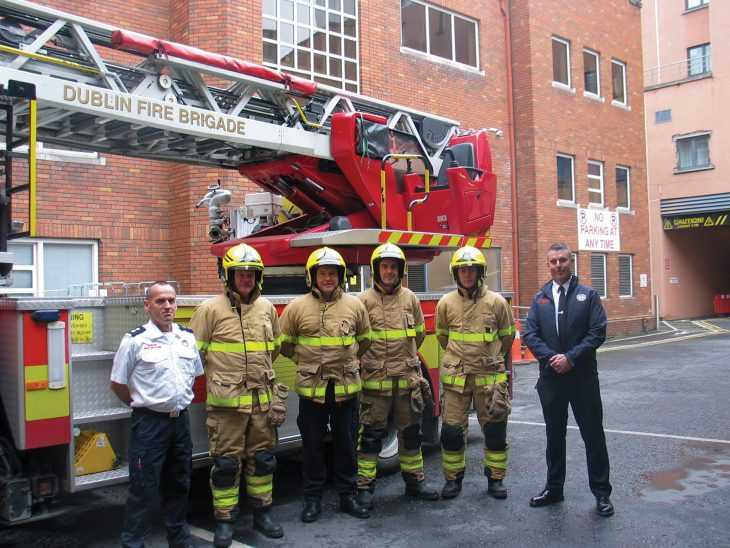 I hadn’t anticipated being treated to an aerial view of the city when I went to visit A Watch in Tara Street, but given the station’s location in the heart of the city centre, and the eagerness of the crew to demonstrate their 30metre ladder, I couldn’t refuse.

Being part of the station that also makes up HQ for the Dublin Fire Brigade means the Tara Street members are equipped with many of the specialist units that are required on an increasing basis, and need the skills to operate them expertly, explains D/O Derek Cheevers.

“Operating these is a lot of responsibility… not the type of things you want to damage,” Derek tells me.

That responsibility means A Watch need the skillsets to match the equipment. “Obviously, everyone is trained as a paramedic but we also have two advanced paramedics here. We also do a lot of training in marine emergency response, given our proximity to Dublin Port, but as our skillsets are quite specialised, in order to work here, you will be trained on a number of skills,” Derek says. “You may come in as a recruit and not have those skills yet, but over time you will have to be trained up, and to maintain all of these skills we have to do a lot of training and drills.”

The crew of A Watch has a broad mix, Derek tells me as he shows me around the first two floors of the HQ building that make up the operational station. “Our oldest firefighter is 51 years of age and has 29 years of service, and we go right down to guys who are in their early 20s who have a year of service, but in general, we would be a relatively young group. It is important to have that mix of experience and youth, with the fitness that brings, and the new gym is a great help with that.”

That recently refurbished gym is one of the benefits of working at HQ. “Most guys are attracted to the fire service because it involves teamwork and fitness, and having the gym on the premises means that a lot of guys use it as part of their daily regime,” Derek says.

The facilities and layout at HQ do make Tara Street unique, but its location also presents unique challenges.

“We have a huge population, which changes depending on the time of day,” Derek points out. “We have people travelling to work on a number of transport types and there is always the chance of an incident. The Liffey has its own challenges, and we are also looking at the challenge of high-rise buildings.

“Trinity College is right beside us, and there is a lot of research going on there, with biochemistry, etc, so we need to have a hazardous materials response plan built around that.

“We also have an EMS Support Vehicle with 40 trauma kits. You could have a situation where you have enough personnel but not enough equipment, but with this it means everyone has their own trauma kit, we can have stretchers, we can triage large numbers.”

On the subject of traffic congestion and responding to calls, Derek says that it can be a unique challenge trying to get out the doors to a call. “The volume of traffic means it can take time, but we can also use the Luas tracks, which saves us a lot of time,” he tells me.

Camaraderie is important in order for A Watch to meet those challenges, and Derek says the working relationship between the crew is very good.

“There is always enthusiasm and a good atmosphere,” he says. “It can be difficult and there can be challenging times, but it is also very rewarding. We see distressing things, but it all comes back to camaraderie when dealing with it.

“You get to know people very well, from the FF/Ps to the admin staff to the control room personnel. There are a lot of people here, but they all get on very well.”

It’s in the yard where I meet FF/P John Foster, Sub Officer Paul Stanley and FF/Ps Aaron Maloney and Derek King, who are keen to get me into the cage on the 30metre ladder to show me what it can do. They strap me into a harness to join Paul on the ladder platform, bringing me up to the full height over and onto the roof of the building to show me the hydraulic extension at work.

Kevin says that as with the FF/Ps out on calls, there is great teamwork in the control room, where people can take distressing calls. “We have a system in place to flag these things, but because of the camaraderie, you tend to know when someone needs to talk, or take a break, before any sort of crisis management is even put in place.”

That is evident from the great atmosphere of dedication and camaraderie I saw at A Watch Tara Street, from both ground level and from 100 feet in the air.