Adam Hyland talks to Buzzer about his career, retirement, and living life to the full.

Retired Sub Officer James “Buzzer” Leigh describes the idyllic setting of his home in Carne, Co Wexford as we speak on the phone. His home in the Canary Islands, which he bought in 2004, is just as idyllic, by the sounds of it, but after hearing about his long and colourful career in DFB, the impression is that he is more than happy to take a step back now and enjoy the fruits of his labour.

With his father serving in DFB until just before he himself joined, Buzzer grew up very familiar with the life of a firefighter, and was well known to his father’s colleagues.

It may have seemed inevitable, but he didn’t originally want to follow in his father’s footsteps. “I wanted to be a chef,” he says, “but I couldn’t get into the College of Commerce, so I did everything from working for CIE to security.”

During the 1970s and into the 1980s Buzzer also served in the FCA’s 6th Field Military Police at the height of the Troubles and carried the battalion’s flag in the St Patrick’s Day Parade for ten years.

After landing a job with Clery’s, he joined DFB at the second attempt in 1978, putting this partly down to his experience in the FCA and knowing how to carry himself at interview. After training in Kilbarrack, he went to B Watch Tara Street to learn the ropes. 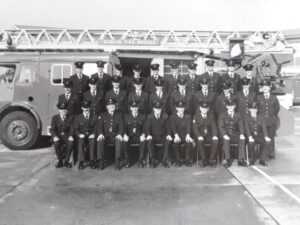 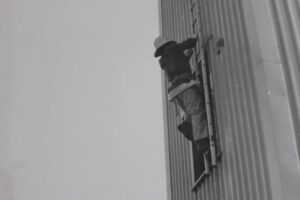 Known initially as Junior Buzzer, he lost the “Junior” tag after an ambulance call out with Willie Bermingham, who dropped the Junior part for the first time.

Between 1981 and 1988, Buzzer was also the union rep for Tara Street HQ and up to five sub-stations, in what he describes as “a very strange time” and enjoyed an ongoing back and forth with the then-spokesperson for Dublin Corporation via newspaper letter pages.

He moved out to the then-new station at Blanchardstown, but after two years, was called into the office and told he was moving back to Tara Street. “I asked what I had done wrong, and they said ‘nothing, you’ve been promoted!’” he tells me.

After two years as Sub Officer on A Watch, he then moved to C Watch Dun Laoghaire after the amalgamation in 1994, and continued to enjoy the hands-on nature of the job. “Over my 19 years as a Sub Officer, I always wanted to go into the fires with my crew,” he says, “because I always felt worried waiting for them to come out. I know that sounds irrational, but when you live as a family, you act and react as a family.”

In 1999 he moved to North Strand, where he remained until his retirement in 2009. In all that time, he always went by the Buzzer nickname, regardless of his rank or seniority.

“People did say to me that as a Sub Officer I should be called Sub Officer Leigh, or at least James or Jim,” he says, “but I always thought that if we were at an incident and there were ten units on the scene, there could be five Jims there, but there would only be one Buzzer, so you knew when you were being called.”

For Buzzer, every station he worked at had its own unique personality, and he says he learned something everywhere he went from different people with different characters and skillsets, and from the experiences he had.

“I remember one night in Tara Street getting a call from the Harbourmaster telling me there was a boat in distress coming into the Port,” he tells me. “That wasn’t so bad, but then he went on to say it was carrying chemicals, and these chemicals were not supposed to come into contact with water, so I knew that would be an interesting night.”

He recounts one story in which he was seriously injured while working in North Strand. “While we were dealing with a diesel tank on fire on a CIE bus, the back wheel exploded and sent myself and my colleague Ken flying across the road. We ended up in hospital because we were hit by shards of metal, and I remember saying to Ken that if only he was a little bit taller, I would have escaped undamaged, because he had been standing in front of me, but because he was so short, I got the top end of the blast.”

Other incidents are also recalled with a laugh. “We did an ambulance case one time involving a woman who was giving birth at home,” he tells me. “We were busy delivering the baby when the priest came in and saw what was going on with the baby and mother. We delivered the baby and asked the priest if he would mind holding it while we cleaned the woman up. The poor man didn’t know what to do with the baby.”

This delivery was one of nine Buzzer was involved in during his career. “That got me mentioned in the paper one time,” he tells me. “I was standing outside the Rotunda watching the Women’s Mini Marathon, waiting for my wife to run past, when a reporter came up and interviewed me. When I told him I was a firefighter, he said ‘oh you must have delivered a few babies in your time’. I told him I had delivered nine, and he asked me who I was there for. Next day it was in the paper: ‘Man who delivered nine babies cheers on his 94-year-old mother in the Mini Marathon’. I don’t know where they got that from, but the wife wasn’t best pleased.”

When asked what he thinks was the best part of working in DFB, Buzzer says it is “definitely the camaraderie”. He continues: “Even now in my retirement, modern technology means I am able to stay in touch with everybody. Even if I am out in the Canary Islands, I am just a call or message away.” 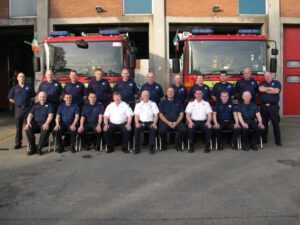 Anybody who follows Buzzer on social media can attest to his very active presence that includes being an online archive of firefighter material, posting items of interest to DFB members and other emergency services, sharing advice and keeping in touch with a huge number of people.

“I keep very active on social media,” he says. “For example, every morning I have around 25 people all over the world I wish a Happy Birthday to, and put up a night scene from Ireland every night, so I am active online all day. You could say my page is collective. Eclectic is another word for it.”

Buzzer’s posts about DFB members past and present are of particular interest, and he sees this as a way of keeping context and background for the organisation.

“It’s very important to keep a record,” he says. “You can hear names of DFB members but people might not be able to put a face to them. I have thousands of photographs here and I try to match them up to the people in question to keep that record of who people were and are.

“There’s no point in putting up a mention of someone and to have people not know who they are, but if you can put up an image and some context, they can learn about other members, and it can jog their memories about people they worked with. It’s about keeping that community together.

“I do try to focus on DFB and fire service material, but I put up anything of interest to me. You can put together a good community of emergency services events and activities. It used to take me ten minutes in the morning, but at this stage it is taking an hour and a half to put up everything I want.

“I invite anybody to have a look at my Facebook page. It’s important to have a shared community of resources like that, especially when your former colleagues may be scattered to the four winds.”

On the subject of leaving the job, Buzzer is very happy to say he is content to now be enjoying
his retirement.

“It is great that retired members can still be involved through social meetings, although obviously not at the moment, but I am glad that I am near enough to be able to see what is going on within the job, but far enough away in Carne and the Canary Islands, that I can step back and lead my own life,” he tells me.

“The big message is not to take life seriously. If you start taking your work home with you, it’s time to retire. When you retire, you have another life ahead of you, you are no longer tied to DFB. You worked there, you had mates there, you should keep in touch with them, but think of your own life, think of your family. I retired more than 12 years ago and I have a whole new life that I enjoy.”