Station profile: B watch No 6 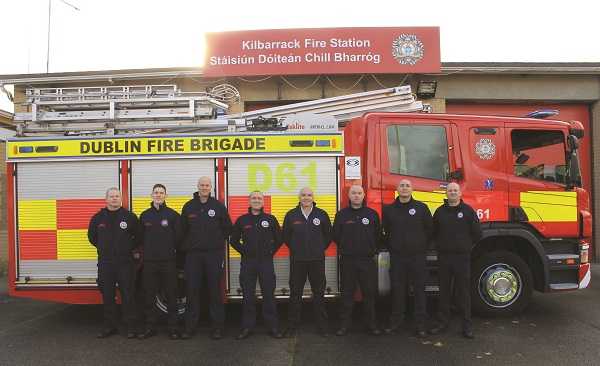 Conor Forrest paid a visit to Kilbarrack fire station and the crew on B watch No 6, headed up by recent arrival S/O Robert Young.

Kilbarrack is a station with a few new faces. One of the most recent additions to B watch No 6 is Graham Forde, a new recruit who passed out from the OBI last October. When we spoke he was only six weeks into his new career, but was very much enjoying it. Graham’s background is in the financial sector, and he spent seven years there before travelling to Australia. It was while he was overseas that he heard that DFB was recruiting, so he flew home to put his name in the hat. “I’ve always had an interest in being involved in emergency services, and the fire brigade was obviously my number one choice,” he says. “There were 50 of us in the class. There were tough days and not so tough days [in training], but we all got through it together. The BA course was the toughest course but the most enjoyable at the same time.”

Graham and his classmates returned to the OBI in the new year to undergo their paramedic training, but for those initial weeks and months he was relishing the chance to learn on the job. “It’s always something different in every call that you’re going out to,” he explained. “It’s good to get that early experience. Soon after leaving the O’Brien Institute and before we go back to do paramedic training we’ve got some exposure to what we’re going to be dealing with down the line.”

Station Officer Robert Young is another recent addition, having transferred from Tallaght to Kilbarrack in June 2016. S/O Young joined the job back in 1995 and has experienced life in quite a number of stations during those 21 years, first as a firefighter and then as a floating sub officer and station officer on A and D watch, based in Tara Street but covering all the stations north and south of the Liffey.

“The last officer they had was here for a good number of years and it was a big change for them – they didn’t know me and I didn’t know them, because I had never worked on B watch. When I arrived it was a clean slate and I decided that I was not going to change anything, I was just going to work away and we would find each other along the way. But straight away I felt comfortable, we had a good rapport. We have a lot of craic but we get the job done – they’re very professional,” he explains. The challenges and risk factors compared to his previous post in Tallaght have changed. “It’s an older population here – we have several nursing homes in the locality. We also have the DART line and local station here, we cover Howth, near the harbour and Clontarf – there are a lot of gorse fires during the summer,” he adds. “We also cover the Airport and Beaumont Hospital, so it’s a large area to cover with a lot of risks, as in most areas.” 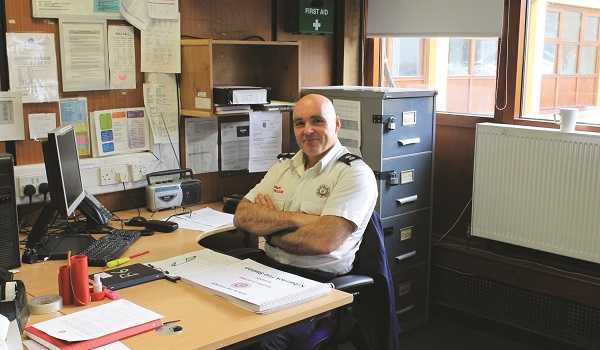 Talk soon turns to the crew on B watch. My immediate impression was of a tight-knit group of firefighters, well able to have the craic but also more than willing to work hard when required. It’s a sentiment with which their S/O agrees. “We have a great diverse crew, all very enthusiastic. We also have an advanced paramedic, Clint, which gives us another dimension to have when we arrive at certain incidents. But the rest of the crew are well capable of doing it as well, they have great knowledge,” he says. “Every generation it’s different, technology keeps changing and the training keeps changing. Graham hasn’t completed his paramedic course yet, but when he does he will be extremely well trained compared to the standard years ago.”

There are plenty of old hands too at No 6. The crew’s mess man, for example, is Bryan Quinn, a 16-year veteran of the job. Following six months in Tara Street, a year in Blanchardstown and a second six-month stint in HQ he was posted to Kilbarrack, where he has been ever since. “The job is great – day to day you don’t know what’s next or what’s going to happen,” he reflects. “It’s a family. Without a doubt I would recommend this job to anyone. It’s an honest living, and generally speaking you are well respected.”

Alongside his role as station officer at No 6, S/O Young is also one of six DFB driving instructors, a role he’s held for the past 12 years. All of the instructors have been trained to the RSA ESDS (Emergency Services Driving Standard) and whenever a new vehicle enters service, the instructors ensure the capabilities of those who’ll be behind the wheel. For example, Dublin Bus recently donated a double-decker bus to DFB, which will undoubtedly be put to good use. Around 72 personnel within the job previously worked as bus drivers or mechanics, and hold the relevant licence. S/O Young was dispatched to the OBI to provide a refresher course in bus driving should the need ever arise.

“Twelve years ago they were looking for driving instructors, and I was asked if I would be interested in it,” he recalls. “We completed a course with the Royal Society for the Prevention of Accidents (RoSPA) in England – they came over and trained us for three weeks in advanced driving techniques. We also had to complete our approved driving instructor (ADI) training with the RSA.”

For anybody interested in becoming a driver, the first step after approval is to undertake a provisional C licence. Following four days of training on the truck in the OBI, a fifth day is spent testing your abilities in the test centre in Finglas. If you pass you’ll return to your station and gradually take on driving responsibilities, firstly on returning from an incident outside of an emergency situation, for a total of about 40 hours. That’s followed by a return to the OBI to undergo the ESDS course for two weeks, training with blue lights and driving both the ambulance and fire appliance. The next step is even further advanced driver training, after which you’ll be ready to drive in any situation. 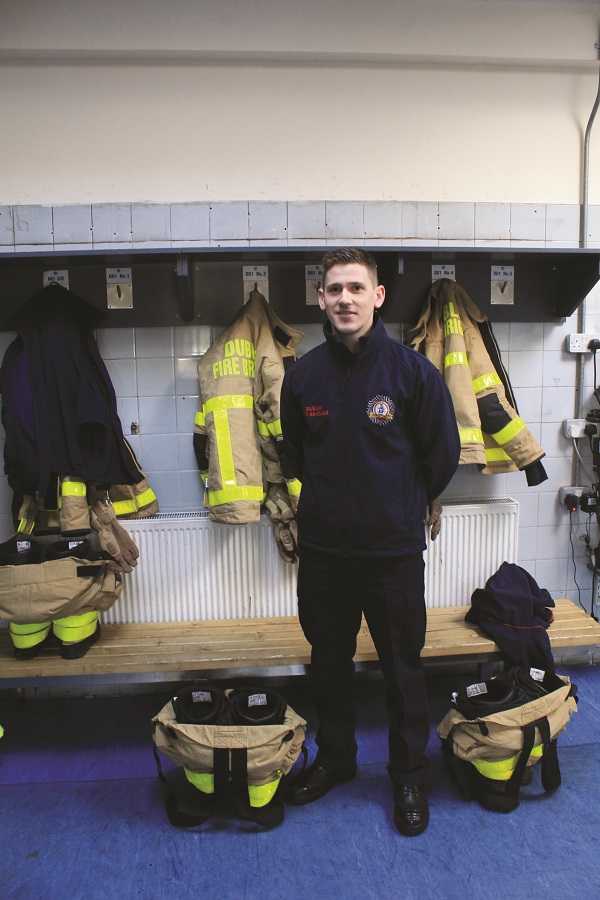 “ That process has changed over the years – at one stage, if you had the licence, you would present yourself at the workshop, undergo a simple test and then you were good to go,” S/O Young explains. “The standard has come up a lot over the years, and it needs to – traffic has become heavier, vehicles are more powerful. It’s a serious situation, driving around the city in blue lights, for up to 15 hours sometimes. You need to have your wits about you.”

One of the first things I noticed when I stepped foot inside S/O Young’s office is the amount of cards hanging in the window. Most are messages of thanks to crews across all four watches, for lives and homes saved, prompt responses and even educational visits hosted in the station or the community’s schools. S/O Young agrees when I comment that there must be a strong community spirit in the area, and fostering and developing that is something he feels is quite important. “We do a lot of community visits, there’s a great community spirit in the area. We do school visits, host fun days and many other events,” he tells me. “We also have a lot of visitors who come in. We recently hosted the local Men’s Shed, from all different walks of life, all now retired, and they were very impressed.”

The sheer amount of wide open space within the confines of the station also caught my eye. S/O Young explains that prior to the opening of the OBI for training purposes in 1985, for many decades recruits honed their craft in Kilbarrack – hence the impressive yard space. Alongside the usual appliances and the training tower, there are a number of features within the yard that are somewhat unusual. Take, for example, the standalone gym, built using funds saved by the station’s focus in recent years on renewable energy. A string of windmills whir away mounted high up in the yard, and at the rear of the station, beneath several leafy trees, is a garden featuring benches and a commemorative monument, a symbol of Dublin Fire Brigade and its strong links with communities across the city and county.

The garden is maintained by a number of retired DFB personnel, who come in every Monday to ensure it’s kept in tip-top shape. They also keep an eye on the station’s beehive which was introduced several years ago to promote biodiversity within the grounds. “They never bother us at all, they just stay over there and there are no issues,” S/O Young says with a laugh. “There are a few racket balls in there that we can’t retrieve at the moment. But nobody to my knowledge has ever been stung.”

Before I leave, I ask S/O Young what he enjoys most about the job. He smiles and leans back, considering his answer. He touches briefly on the craic the crew enjoy every day, and enjoying a job in which no two days are the same. Finally he settles on the opportunity Dublin Fire Brigade personnel have every day – to save lives and make a difference to Dublin’s citizens, though he’s quick to note that they’re just doing their job.

“Normally when people meet us it’s not a good occasion. You’re not looking for thanks, but you do feel you make a difference in the area, and you hope you leave a good impression of the brigade,” he says. “I hope my son Karl, who is a firefighter in the retained station in Skerries, experiences as much enjoyment and fulfilment in his career as I have experienced during my time in the brigade.”