District Officer Mario Lodola talks to Adam Hyland to provide an insight into the role and responsibilities of the DFB Mobilisation Officer.

The role of Mobilisation Officer, or “Mobi” as the position is colloquially known, has a long and proud tradition within Dublin Fire Brigade. Initially established more than 50 years ago, it is the role of the Senior Operational District Officer on each Watch and involves planning and overseeing the effective and efficient management of the delivery of a wide range of services to the public on a day-to-day basis.

“The Mobi also provides leadership and sets the standard across the Watch, providing a command and coordinating role that ensures each fire station across the city is fully crewed at all times.” He adds: “This sometimes requires overtime to fill these positions, and as you can imagine, this can make you very popular or unpopular!”

Working not just within our own organisation but with other emergency and essential services including An Garda Siochána, Coastguard, HSE and Civil Defence means regular inter-agency coordination/communications is often required, particularly during protracted and larger incidents, or extreme and severe weather events.

“We also have a commitment to the provision of Marine Emergency Response in the event of a fire or other emergency on a vessel at sea, when a request for assistance may be received from the Coastguard,” D/O Lodola tells me. “This requires DFB to provide significant resources including firefighters and paramedics, and my responsibility is to coordinate activities and ensure this happens in a timely manner and as seamlessly as possible.”

At large scale incidents, specialist equipment and other resources are often requested to attend by Incident Commanders and can be in use for a considerable time, and this can put undue strain or pressure on the system.

“My role is to ensure this does not have a disproportionate impact or deplete our ability to respond to other incidents in our functional area,” D/O Lodola says. “Redeploying resources to different stations around the city to ensure resilience is maintained is a crucial element of that.”

Ensuring the provision of all DFB services requires an extensive amount of skill and experience in frontline activity, planning and management, something D/O Lodola’s career to date has provided.

Having served with the Irish Defence Forces for eight years, including seeing overseas service in Lebanon in 1982/83, he joined the fire service in 1987 and spent seven years with Dun Laoghaire Fire Brigade before they amalgamated with DFB in 1994.

“During this time, I was seconded to GOAL and had the opportunity to respond to Congo/Rwanda during the humanitarian crisis in 1994,” he tells me. “This gave me great insight and experience dealing with international agencies and organisations in often very difficult conditions.”

He transferred to B watch North Strand in 1994, continuing as a firefighter for seven years until promoted to Sub Officer in 2001 and subsequently Station Officer. Initially stationed on A Watch Phibsborough, he floated in fire stations across the city before settling in C Watch Kilbarrack, and “worked with a great team for five years”.

During this time, he also completed a degree in Local Government and got involved with many different training courses and projects, both as instructor and student, to further his expertise and experience.

“This included the development of procedures for incidents in Dublin Port Tunnel,” D/O Lodola tells me, “that initially involved attending an instructor training course with colleagues in Switzerland and rolling out training for Brigade personnel.” More recently, he led the development and delivery of the training programme for Station officers.

2009 brought promotion to D/O and “six enjoyable years on D Watch HQ”, with a short period as Mobi, but D/O Lodola saw the opportunity for further development. “I had an interest in enhancing my knowledge and understanding of fire safety in buildings and completed a Post Graduate Fire Safety Diploma in Trinity College, and in 2015 I moved to Fire Prevention,” he says. “The work in Fire Prevention was different to Operations and required a different skillset, but was extremely interesting and it allowed me to apply the knowledge I had gained on the course in Trinity.

Some of the duties involved unannounced inspections of various types of premises, events and concerts, ensuring they complied with fire safety regulations and best practice. This also included nightclubs, public houses, nursing homes and hotels.

“The interaction between Fire Prevention and Operations has increased significantly in recent years and is to be welcomed,” D/O Lodola points out. “The staff in Fire Prevention are a great team, a pleasure to work with, and always on hand to assist if required.”

Two years later, D/O Lodola made an unusual move. “After two happy years in Fire Prevention I felt it was time to move on and wanted to move back to operations,” he tells me. “An opportunity arose, and I moved back as Mobilisation Officer on C watch. This was unusual at the time because it was the first time a District Officer had done this, but operations was always what I found the most enjoyable and challenging.”

This means that while it is a challenging role, D/O Lodola enjoys the role immensely, and the involvement with DFB members it brings. “One of the more enjoyable aspects of my job is interacting with staff across the Brigade on a daily basis,” he tells me. “I provide support, guidance and direction to operational officers and fire and ambulance crews. This could include a fire safety or a child welfare issue that the crew is unsure about, or the provision of restricted medications for our Paramedics. The one thing staff can always be sure about is they will get an immediate decision on any matter or clarification sought – even if sometimes the answer is not always what they want to hear!”

The Mobilisation Officer also needs to have a good working relationship with the Officers, and particularly D/Os on the Watch. “This ensures they maintain regular contact and seek clarification if they have concerns about a particular issue at District level, or at a complex operational incident,” D/O Lodola explains. “This is one of the reasons the Mobi is such an important cog in a very large and complex organisation, and is available to all staff 24/7.”

Also 24/7 is the need to keep the public and media informed of any developments or updates, whether they relate to an ongoing incident or a general enquiry about a previous incident, and dealing with media queries that can come in at any time of day or night is also part of the job.

Another major part of the role is working with the Eastern Regional Control Centre located at DFB HQ, which processes more than 150,000 999/112 emergency calls per year. Mobilising fire appliances in the Leinster region as well as Cavan and Monaghan, it also mobilises DFB’s EMS resources including the 21 frontline fire appliances, 14 ambulances, Advanced Paramedics and other specialist equipment based strategically around the city and county.

“This allows DFB to provide a first-class combined service to the public,” D/O Lodola says, “and requires a significant commitment from our ERCC staff. My role is to ensure this runs as efficiently as possible and address any day-to-day operational issues that may arise. From time to time our resources are also requested by other fire services in adjoining counties, and this again requires coordination to ensure adequate resources are deployed and allows a safe system of work for all concerned.”

As a Principle Response Agency, DFB plays a significant role in Major Emergency Management, and the Mobi has a number of key responsibilities if a Major Emergency is declared. Daily interaction occurs between the Mobi, senior management and many other sections of DFB.

“We have a large fleet of ambulances and fire engines that are maintained to a high standard, and this requires timely facilitation to ensure operational resources are not depleted significantly if vehicles or equipment require servicing or replacement,” D/O Lodola tells me.

“Unfortunately, from time to time some of our fire and ambulance crews do receive injuries or vehicles are damaged, and this has to be managed, recorded and investigated. The Mobi appoints a District Officer to investigate and make a recommendation on how to mitigate this in the future. Our staff attend very sad and difficult incidents too, and it is important they have an available resource like our Critical Incident Stress Team (CISM), so the Mobi, when alerted, also ensures this is provided and may require crews to stand down for a period of time.” 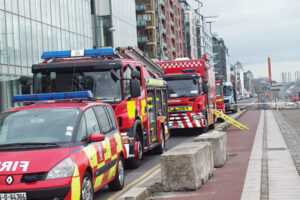 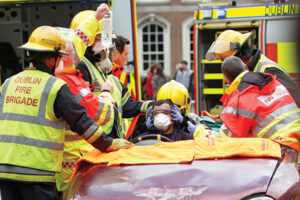 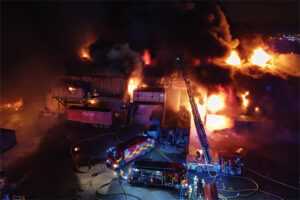 The past year has been a difficult year for DFB, but D/O Lodola is quick to praise his colleagues. “It presented significant operational challenges to all our staff and I have great respect and admiration for them,” he says. “The COVID-19 pandemic initially tested traditional thinking within the organisation, but our Officers and firefighters adapted and dealt professionally with providing reassurance to the public”. This often required working on fire appliances and ambulances in difficult conditions and turning up for work day and night even when safety concerns within the general population were heightened. To me, this was a true indication of their commitment and professionalism.

“The Brigade has a very rich tradition as an agile and problem-solving organisation. We faced many challenges across the organisation during the pandemic, and it is important post-COVID-19 to ensure that we rigorously assess our performance at all levels during this period in order to see if any lessons can be learned.”

Other challenges also lie ahead, D/O Lodola points out. These include the proposed Metrolink across the city, which will involve significant planning and consideration from Fire Prevention and Operations regarding fire safety, operating procedures and tactical training.

“The continued expansion of the city and county and the provision of a Fire/EMS response that the residents of Dublin have come to expect will need consideration in the future,” he adds. “People who previously worked in the city are now working from home, so it will be interesting to see how this will affect the city centre occupancy in the future.”

Having worked within the fire service for 34 years, D/O Lodola says that he has seen many changes within DFB through his various roles.

“One thing that always amazes me is the quality of the firefighters and Officers that come through the system,” he tells me. “The standard of education has increased significantly within the organisation, and this is to be welcomed. However, managing expectations with regard to promotion will be a challenge in the future. We are lucky to have staff who often operate in difficult environments on a daily basis in a way that is professional, committed and practical when dealing with people who are sometimes very distressed.

“The Brigade has a new cadre of recently promoted District Officers coming through, and I am looking forward to getting to know them and giving them the benefit of any knowledge and experience I have gleaned. After all,” he adds, “some of them will be the Mobilisation Officers of the future!”