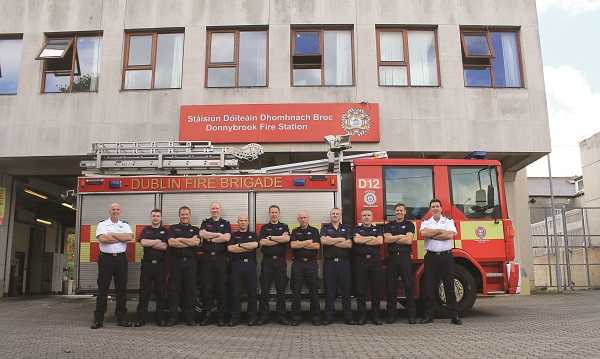 The home of hazmat response for Dublin Fire Brigade, Conor Forrest took a trip to B watch Donnybrook, headed by S/O James Bissett.

The risk factors faced by the crews of Donnybrook fire station are quite varied, thanks to their location in the heart of Dublin’s southside. Clonskeagh Hospital and The Royal Hospital Donnybrook lie to the west, the RDS to the northeast and UCD due south. Alongside high-rise buildings in nearby Ballsbridge and new apartment blocks in Dún Laoghaire, there’s also the sea to contend with a little more than 2km away. And then there’s the Aviva Stadium, the Covanta Plant in Poolbeg, the nightclub hub of Harcourt Street, and a wide range of private and nursing home accommodation scattered throughout the district. All-in-all, an interesting mix.

During my recent trip to No 1, Station Officer James Bissett was on duty – the last time we met was just before Dublin GAA won the first of what would become a treble of All-Ireland Championship triumphs. S/O Bissett (a former Dublin footballer himself) moved from North Strand to Donnybrook two years ago and is celebrating his 30th year in the job this year. S/O Bissett adds the Luas and the DART to Donnybrook’s considerable list of responsibilities and highlights the station’s expertise in hazardous substance response. Once a call comes through, a special appliance is dispatched from the station carrying a variety of hazmat response gear including a decontamination tent, a sealed hazmat suit, and additional oxygen tanks in the event of an extended delay.

“We respond to any chemical incident – the crew are all trained in all aspects of hazardous substances and decontamination,” S/O Bissett explains. The first step is identifying the chemical involved, via the control room or through an on-scene examination. Once they have a name or code, it’s a matter of double checking the required response parameters contained in a reference book or laptop – whether the chemical is corrosive, poisonous or flammable, which firefighting medium should be used, or whether the immediate area should be evacuated – among other concerns.

“The areas we would cordon off would depend on wind direction. When we’re going to a chemical incident we’re looking at the wind direction – the way we approach it is uphill, upwind. It could be a vapour, it could be airborne, it could be a liquid,” S/O Bissett tells me. “Arriving on-scene, the first thing you have to do is identify the substance, then stand back and say ‘what does this substance do, how do we deal with it properly?’ It’s about getting all of that information and making a plan as to what you’re going to do.” But hazmat response doesn’t just concern itself with the chemical – crews who have already arrived on-scene might have been exposed without the necessary protective gear.

“Local management is very important when you get there,” he adds. “The problem is that when you get there the people that are involved in it may not be wearing any respiratory protection and they’re caught, and you may have to go and do a snatch rescue. [Then] the decontamination unit comes into play. It could be mass decontamination depending on where it is and how many people have been affected. Every incident is different.” 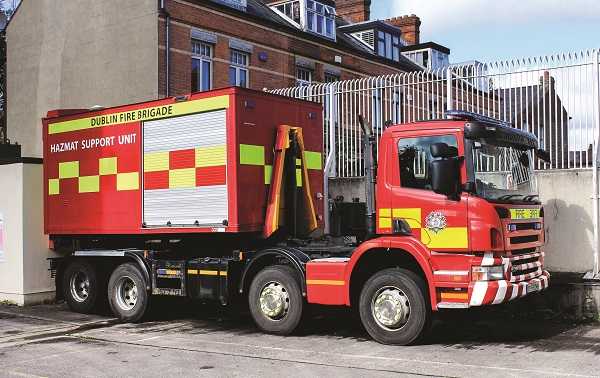 Understandably, given the risky nature of responding to chemical incidents, training is a key part of the job for those stationed at No 1. That’s augmented by words of wisdom between the senior and junior men; the former willing to share what they’ve learned over decades of work. Ex-Defence Forces soldier Ben Wedick is the station’s most senior man on B watch, a 20-year veteran of Dublin Fire Brigade. Following two years in Townsend Street at the beginning of his career, he transferred to Donnybrook and has been here ever since. Five years into his career he began driving, starting with the old white ambulance which you could drive then with an ordinary car licence. Enjoying it, he progressed to driving the motors, getting to know the area quite well in the intervening years. Ben explains that he’s happy to pass on his own knowledge as he remembers what it was like to start out in the job.

“I began here as a junior man for about five or six years – it was quite a senior crew here which I learned my trade from. You just watch and you listen instead of jumping in and saying things. It was one of the better moves of my career. Since then a lot of junior guys have passed through here, and I hope I have instilled a bit of my knowledge into them. I’ve worked with a lot of good officers such as Stephen Brady, the ex-Chief Fire Officer – he was my S/O when I came here first,” he says, adding that the banter is what he enjoys most about the job, although once the bell goes that all changes.

“When we have to go out the gates the banter stops. We’re as professional as any guys I’ve ever worked with,” he stresses. “Everybody brings their little bits and pieces to the role. Tom is an ex-nursing student, I’m an ex-military man but I’m also an electrician. A lot of the lads are well clued-in with life skills that they bring to the fireground whenever we have to.” Ben also mentions that there’s a great community spirit in No. 1, aided by the fact that the crew all enjoy playing sport, from five-a-side matches against Townsend Street after the night shift to an occasional game of golf, not to mention an annual trip away together in summer or at Christmas. “I’m the oldest firefighter and it makes me feel young having young [people] like Tom in his mid-20s coming in. Because I never grew up myself!” he says with a smile. 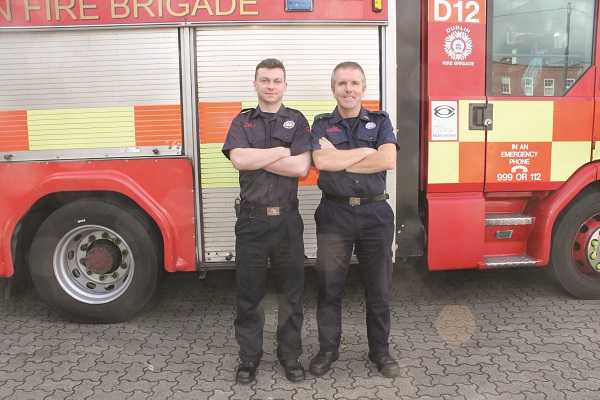 ‘Tom’ is Tommy Byrne, relatively fresh from the OBI having graduated with Class 1/2017. Tommy’s background is in nursing, having studied the subject for three years in college before the chance to join DFB came up, something he believes gave him an advantage when he applied last year. “I always had an idea that I wanted the medical side of things, helping people in any way I can. I went with nursing and I was going into my final year when this came up. I went for it not knowing if it would go my way or not, but at least it would be experience for the next time it came around – I would be well prepared. Things luckily went my way and I ended up getting in, but it meant I had to put the nursing degree on hold,” he explains. Tommy is barely six months into his new job, by now part and parcel of the crew on B watch having been welcomed into the fold from the beginning – older crew members like Ben have taken him under their wing, showing him the ropes. Though he hasn’t attended any major incidents as of yet, he has very much experienced the differences between a simulated scenario in the OBI and the real thing.

“The ones I have been at, they are a lot different than [the exercises in] training. But that’s the job, you came in, you did all the training for that, and you’re with colleagues who have years of experience in dealing with this,” he says. “All you do is if you’re not sure, look to them, and they’ll point you in the right direction and make sure you’re doing the right thing. You adapt, you bring in whatever skills you have – you’re part of a team that all have different skills, different qualities and you come together and make the situation work.”

The benefits of working as part of a cohesive team are something that Joe Brennan, another of the station’s long-serving crew members (now in his 11th year in Donnybrook), can attest to. A second-generation firefighter following in the footsteps of his father Brian, who was stationed in Dolphin’s Barn for 30 years, Joe played hockey at an international level both before he joined the job and in his early years. These days he’s still involved in the sport as assistant coach to the Irish women’s team, something he tells me wouldn’t be possible without the support of his colleagues. “Both the guys I work with and management are really supportive of me,” he explains. “Even now I’m involved as the assistant coach for the Irish women’s team and they’re still so supportive in helping me try and represent the fire brigade.”

Joe’s role is one of the most important in any station, having taken over the running of the mess almost a year ago. When I arrive he’s in the middle of preparing for lunchtime, the extractor fan running at full speed, hobs burning brightly, and food moving through a conveyor belt of efficiency from preparation boards to storage plates.

“My dynamic in work has changed a little bit now because I’ve taken over the mess for the last year,” he says while manhandling a large frying pan. “I enjoy coming out of my comfort zone, being under pressure. I love meeting people in work, I love the characters in work – that’s what makes the job, the characters. The unpredictability of what’s going to happen in the job is great, dealing with the public, helping people. I love coming into work – there’s a great sense of camaraderie in this station.”