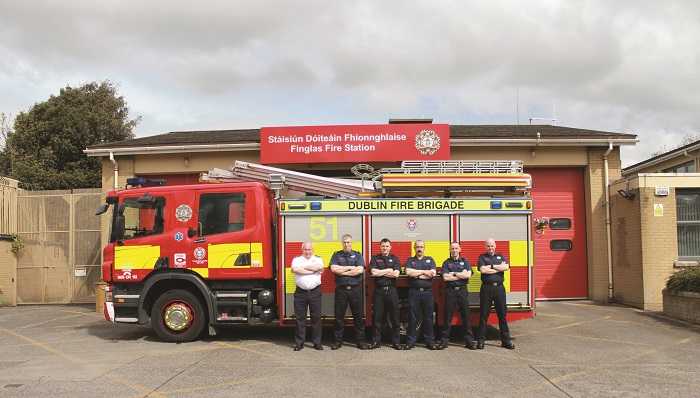 We caught up with the crew of C watch No 5, learning more about the scope of their work on the northside, and what makes the job so special.

Finglas fire station was somewhat quiet when I arrived on a sunny morning last April. The ambulance was out on a call, the fourth or fifth in just two hours, while the appliance was taking a break in-between responses. C watch was on duty that morning, helmed by Station Officer Derek McGuinness who is on his second stint in Finglas. Starting out as a retained firefighter in Swords, he moved to a full-time role in 1990 and spent a year in Phibsborough followed by three years in HQ. From there he moved to North Strand until his promotion to sub officer on D watch HQ. Following a further promotion to station officer, he spent three years in Finglas on C watch, before moving to Donnybrook and then to the Equipment Maintenance Department. However, No 5 beckoned once more, and he’s been overseeing C watch here once again for the past year.

“I’m in my 27th year full-time. AFS before that, Civil Defence, a bit of work with the Red Cross. I’ve always had an interest. My father was a fire officer in Squibbs in Swords – it was in the blood,” he explains. “I’m back to the old crew now. I had a choice – I can really only work in two pump stations as I’m a senior station officer, but despite having one pump, Finglas is classified as a district station because we have the two retained stations and Swords. It’s a little busier here, but I’d rather be busier than not.”

Given the breadth of Finglas’ area of responsibility, it’s no surprise that it’s a busy station. No 5 covers to the borders of Phibsborough’s area in Glasnevin, and from there right up to the border with Louth. They also respond when required to domestic incidents or RTCs alongside crews from Swords, and Skerries and Balbriggan retained fire stations. Bristol-Myers Squibb in Swords presents a potential hazmat challenge, which the large electrical station on the North Road, where large amounts of fuel are stored, adds to the list of potential large-scale incidents. Training obviously plays a key role, with regular training exercises arranged to keep the crew up-to-date in the event of an incident.

“The main one, of course, is the Airport, that’s our main priority. We would liaise very closely with the officers in the Airport – if they have a manning shortage on a night shift they would inform us that they don’t have a domestic appliance available. In that situation we would increase our turnout response to three pumps instead of two for any alarm,” S/O McGuinness explains. 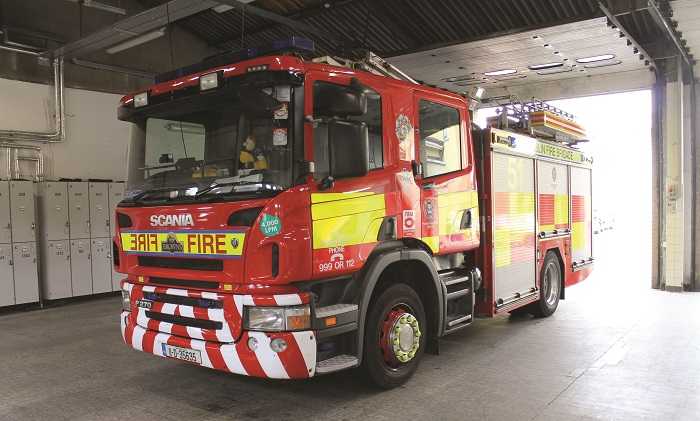 The appliance at No 5

The paramedic aspect of the job is something that has always interested S/O McGuinness. He was one of six pioneers of DFB’s advanced paramedic programme, travelling to the US in 1991 to complete a 12-month paramedic course. The six took part in an internship with New York Fire Department and undertook a number of clinical placements, in partnership with Northeastern University in Boston, Massachusetts. What they learned over the course of those 12 months was hugely significant for the development of DFB’s paramedic capabilities, having been exposed to a wide variety of situations they would never have encountered back home. On his return, S/O McGuinness was seconded to the OBI Training Institute for several months at a time to train other paramedics, a far cry from the basic first aid course he completed as a recruit in St. Mary’s Hospital in the Phoenix Park.

Today, DFB’s dual role firefighter/ paramedic system is serving the city well – with stations strategically located north and south of the Liffey calls are responded to with little or no delay. As with most stations around Dublin, medical cases far outweigh calls to attend fires, and the crew on C watch have had a number of saves in the area over the past few months, including several successful resuscitations following cardiac arrest. S/O McGuinness notes the positives of being able to dispatch a fire tender to the scene of a medical incident with trained paramedics on board. “It’s an excellent resource to have pulling up at your door, with five or six paramedics jumping out,” he says. “Some of the APs are riding out on the tenders as well.” One of those paramedics is Mick Ennis, who joined the brigade in 2001 and has been stationed in Finglas since April 2002. “It’s a great job, a great career, it’s a great thing to be a part of,” he says.

As you might imagine he’s seen quite a few changes in the intervening years – officers and recruits coming and going, changes in the way they tackle incidents and how they can treat the patients they encounter. For example, in his early days Mick would often respond to a local man with diabetes who would go into a diabetic seizure from time to time due to low blood sugar. Initially, his sister would keep Lucozade tablets or jam on hand for the paramedics to ‘administer’, but as time passed and DFB’s medical resources expanded, the ambulance’s supplies included glucose, glucagon injections and much more besides.

“The level of professionalism is so vast now. For people with breathing problems… when I started there was oxygen and that was it. Now we can give salbutamol, ipratropium bromide. And you can physically see the people in front of you change, from where they couldn’t breathe and they’re frightened to where they’re back talking to you and thanking you. There’s a huge change in the level that we operate at.” Mick also pinpoints geographical changes within Finglas’ area of responsibility, including the changed landscape of Ballymun and the advent of the Port Tunnel. “When I started there was no tunnel,” he explains. “That doesn’t affect us hugely because it’s very safe and well organised so we wouldn’t be down there every hand’s turn.” I ask Mick about any cases that stand out in his mind, and he smiles. “I remember one case that stands out,” he says.

That particular case took place in the vicinity of the station; a call came in advising that a stabbing had taken place. Though another ambulance had been dispatched, Mick and his partner John O’Riordan reached the patient first. The individual was lying on the ground, miraculously still alive, a knife protruding from their chest. Though the crew initially secured the patient in the ambulance, the patient managed to remove the knife and became quite aggressive. In the end, garda reinforcements were called, the patient was restrained on the ambulance stretcher, and was taken to hospital. The impact and experience of senior personnel like this is invaluable, particularly for those who are new to the job, like recruit Dave Brennan, currently completing his paramedic training. Three years ago F/F Gary Wilson was in that position, having joined the brigade internally from Dublin City Council, starting out in Finglas in 2009.

“Every call is different, when the bells go off you don’t know what’s going to happen, you don’t know what it is. Starting off it’s a new language for you, it’s completely different,” he explains. “You do it in training, but when you get hands on with the practical side of the job it’s a whole different ballgame. You need the senior lads to take you under their wing – they teach you a lot. We have a recruit here at the moment, so we’re helping him. We all started off the same way.” 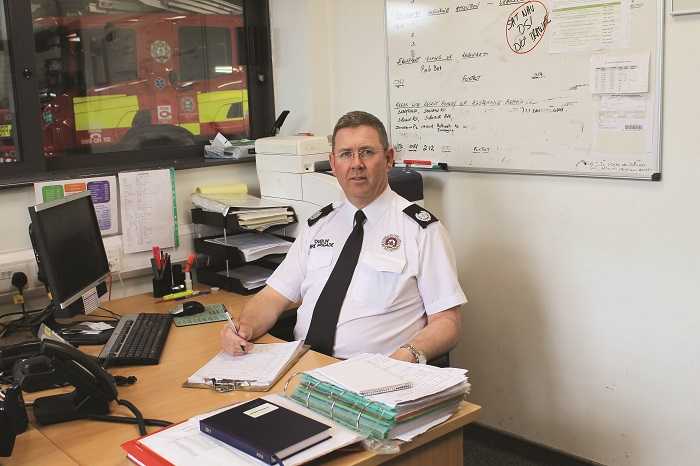 One thing I’ve noticed from each of the stations I’ve visited is that the crew are often involved in charitable endeavours, raising funds or awareness for a wide variety of worthy causes. Finglas is no different – S/O McGuinness has travelled to Zinder, a city in Niger, to provide his experience and expertise to the city’s fledgling fire department. Working with Fire and Ambulance Development in Africa (FADA), he was one of six people who travelled to the West African country two years ago, bringing with them several fire tenders and old cutting equipment that had been donated by brigades around the country. The team spent two weeks in Niger; a five-day drive through the Sahara desert, followed by a training programme to teach Zinder’s firefighters how to operate their newfound equipment. It’s an expensive process – the biggest expense is shipping, costing roughly d5,000 per appliance to ship from Ireland to Africa.

“That’s an ongoing project. Kildare Fire Brigade got in touch with me when I was in Logistics, and donated two fire appliances. There’s a crew that refurbishes appliances in their spare time, and any old equipment that brigades around the country can donate will be gladly taken,” says S/O McGuinness, who hopes to make a collection of the old DFB uniforms once the new versions enter service this year. “A couple of medical supplies went out this year, but we’ll probably go out teaching again next year. They’re basically starting from scratch.”

Although outfitting the city’s fire service with modern technology is the main goal, there have been some unexpected but positive side effects. Some of the fire tenders are also being used to ferry water from wells to villages, which allows young girls to receive an education – usually they’re kept at home to carry water throughout the day, but now their time is freed up to continue their studies.

Getting involved in causes like these, alongside work that is different each and every day, makes for a career that is never dull, one in which you can give back to not just your local community, but those further afield. “I started here when I was 30. I had seen a bit of life, I had worked in different places, but this is like no other,” says Mick Ennis. “My son is 21 and has just got on the panel to come in. We’re really proud because I think it’s a fine, honourable job to be in. There’s stuff that happens along the way that knocks you, but generally it’s the best job in the world.”