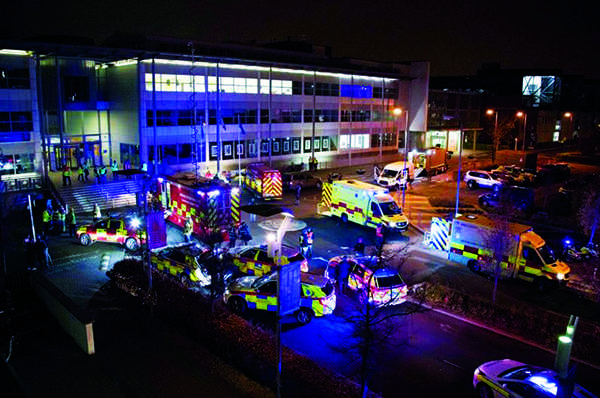 The DFB took part in a major simulated terror attack and mass casualty training exercise at DCU on November 16.

The inter-agency training exercise, Operation Barracuda, was led by An Garda Siochána and involved specialist response units, the Defence Forces, the National Ambulance Service, as well as recruits from the Dublin Fire Brigade. It was designed to test the capabilities of first responders in the event of a mass casualty incident or terror attack, with the focus on saving saveable lives. The assailants and victims were played by 50 recruits from the Garda college at Templemore.

In the real-time tiered response, the simulated operation began when the Garda control centre received a 999 call at 7pm reporting a road traffic collision at DCU campus. Local Garda units responded first, and quickly determined that mass casualties were involved.

Crews were mobilised from the OBI to attend, but within minutes it was elevated to a major emergency when a number of “assailants” primed their car with explosives before getting out and stabbing and shooting people on the campus. A second call for ERCC Communications and Mass Casualty Units was then made.

As gunfire erupted, the DFB and NAS crews were tasked with the rapid extrication of further casualties, and to take cover in safe areas.

Blanchardstown Station Officer Mark Fay is also a recruit course trainer at the OBI. He was Initial Incident Commander at Operation Barracuda, tasked with the role of liaising with the other agencies and coordinating the emergency response from the DFB. For him, the way the operation played out was realistic, and a useful training exercise for the DFB recruits.

“When we arrived, we were told that there were still active shooters in the area, so we were prevented from going further into the campus by the Armed Response Unit and Garda officers, which is realistically what would happen. For us it’s about working in a safe area. We wouldn’t be sending a crew into an area that wasn’t cleared.

“Some of the lads found it hard that we had to hold back,” he added, “but to make it as realistic as possible, we had to wait for the other agencies to make the area safe for us to do our job.”

The recruits were given no advance warning of what they could expect from the exercise, but Mark was happy with how they handled it. “They did very well,” he said. “It was a bit daunting for some of them because it was the first time they had to work with another agency, but they triaged every casualty.

“It was a good incident for the recruits to see what they could expect,” he added. “From what we saw, and regarding our role in it, it was a success.”

As the exercise continued, one of the assailants was shot dead before the two remaining terrorists retreated into a building and shot more casualties, taking a number of hostages.

The Garda Armed Support Unit moved in, while a joint DFB/NAS team of paramedics established a Casualty Triage and Clearing Station in an adjacent building, where they could remove and treat casualties it was possible to save.

As fire erupted in the main building, armed gardaí stormed the area, shot the assailants and retrieved the hostages, before DFB firefighters were allowed to enter to extinguish the fire and remove casualties to paramedics.

As members of the Defence Forces Explosives Ordnance Disposal unit dealt with the booby-trapped car, DFB and NAS paramedics continued to triage, load and transport the “wounded” to hospital, and after an hour, the exercise was wound down.

Although performed in real time, each agency had prepared for the training exercise individually, starting with desktop scenarios and building gradually to the operation itself.

Greg O’Dwyer, Senior Fire and Emergency Management Officer, was involved with the operation from the start and acted as the DFB’s lead in its planning and preparation.

“We started planning in February, and had a workshop that included a full scenario briefing,” he said. “After that we had monthly, then bi-monthly planning meetings and in the run up to the operation we had weekly meetings to go over what was going to happen. In September, we had a tabletop exercise that went through the full inter-agency involvement, before it became a reality in November.”

On the night itself, he and the Chief Fire Officer Dennis Keeley acted as narrators for VIPs and media present to witness the events unfold via security cameras and the various comms, and he was keen to see how inter-agency cooperation would work.

“There were two key purposes behind the operation,” he said. The first is to test inter-agency communication and coordination. How we take the 999/112 call details and how we share that information with each other, ensuring that responding crews have the best information possible. Then ensuring that any further information coming from the first responders at
the scene, is also shared to all responding agencies.

“The second is to test each of the agencies’ individual preparedness for such an event, their procedures for dealing with it and the coordinated incident command system, ensuring a safe and efficient response and scene management.”

Greg also thought the exercise went very well.“The real takeaway for the DFB was how well we worked together with the HSE’s National Ambulance Service. Obviously, we needed a lot of coordination and on the ground organisation between the two agencies,” he said. “In a mass casualty incident, your training is important, but so too is coordination in trying to get through all the casualties, and bring them to safe locations for treatment. If such an incident was to happen today, after that exercise I would be very confident we would work very well to get the best possible outcome.

“Of course, we could have more personnel on hand, but with what
we had on the night, and what we have to work with, I think we are very well-prepared.”