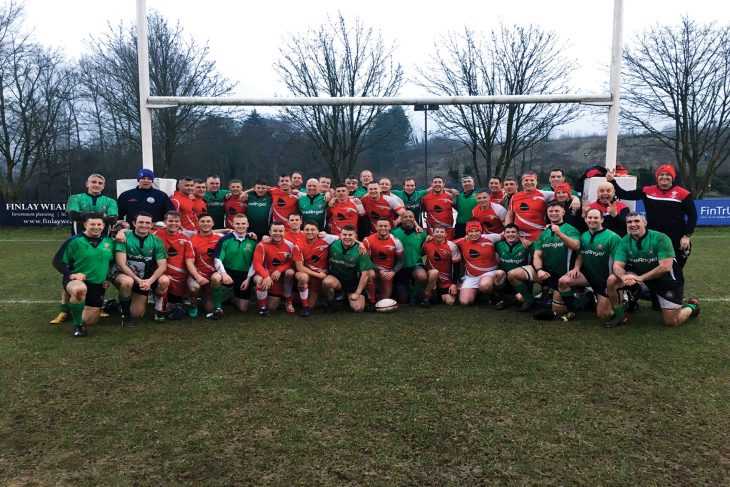 On 7 February, a strong contingent of players from the Dublin Fire Brigade Rugby Team travelled north to Instonians RFC in Belfast to join up with their NIFRS colleagues to play a match against the Welsh Fire Service.

Both of our teams provided more players than we could field on the day, so as Chairman and Coach I found it very tough to keep our contingent to 11, with quality, committed players not getting their game on this occasion.

Those that were selected did themselves proud, though. Veteran player Stephen Cunningham controlled the game well at out-half, with his experience invaluable in a combined team scenario where neither group were familiar with the other.

Kevin Conroy got over the line for the first try of the game, which was well deserved as he has been committed to the development of this new DFB team and has been excellent in the full-back position.

Our forwards combined well with their NIFRS colleagues, and there was some great ball carrying and support play from Cathal McNally, who consistently brings a level of aggression that the opposition found very difficult to deal with on this occasion.

Matt Crehan paired up very well with NIFRS second row and captain Peter Bradley, winning almost all of the Irish side’s lineouts and stealing a few opposition ones as well.

Stephen Weldon and David Sheridan battled hard in the back row against an experienced Welsh pack, and dogged determination from both limited the damage that could have come from the powerful Welsh scrum.

Brian Tyrell did struggle for pace a little at scrum-half, with slow passes from the base of the ruck putting his backs under pressure, but even though he is clearly not a scrum-half, he battled it out with his head held high. In fact, he held his head a little too high in the ruck and sustained an injury to his ear that required a few stitches! Brian doesn’t ask questions, and when tasked with playing at scrum-half he responded with a nod and a wink, and got on with it with the right attitude. 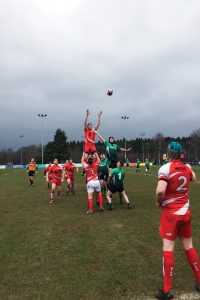 Stephen Breen and Brian Twamley have also been a great addition to this team. With poor weather conditions in Belfast on the day, the ball rarely made its way to the wing, but as always Stephen and Brian were very effective when it did, and were excellent in defence.

Alaric Collier came off the bench and made some good carries too. Committed to the sport and to ensuring this DFB team continues to grow, he puts his age to the back of his mind and gives 100% at all times.

The game, played in very difficult conditions, was very attritional. The pack worked tirelessly throughout and did well to provide a platform for the backs, who planned and developed some clever moves in the hour prior to the game.

The combined Irish Fire Services team were ahead for almost 70 minutes and had victory in our sights, but a late try for the Welsh, who seemed to find another gear in the closing quarter of the game, proved a tough pill to swallow for the whole team, and in the end the final score was 27-25 to Wales.

This Welsh team are a seasoned group who have been training and playing together for several years, so while for the game to finish the way it did was a little disappointing, the close final score showed that the team we selected is capable of competing against very tough sides.

The long-term plan is for this combined Irish Fire Services team to get together more regularly through training sessions and a few games each year. DFB RFC is continuing to grow, and more players are always welcome and needed. Anybody interested in joining the team should contact me at A Watch, Tallaght.

Special thanks must go to the travelling support from players who were not selected to play on the day, and from those who have historically supported the development of our team and have always enjoyed a trip away.

The team enjoyed the hospitality of the NIFRS team, and we look forward to meeting up with them again soon.

Thanks as always to the DFB Sports and Social Club for their support, Flashpoint Medical Systems for their continued support, and our sponsor Dubco Credit Union.