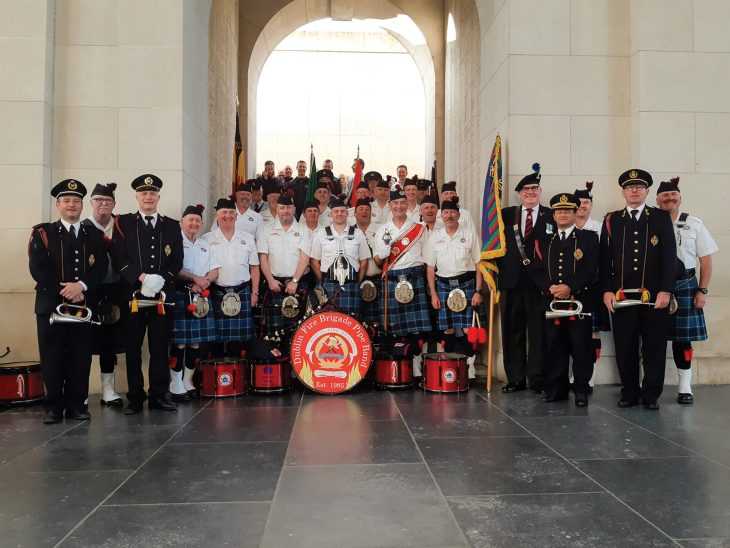 At the end of May 2019, the Dublin Fire Brigade Pipe Band travelled to Belgium for a series of engagements. Each travelling member was looking forward to the event as this trip was the first one away for the band in more than four years.

At 5am on Tuesday, 28 May, 25 of us met at Dublin Airport, with the group comprised of 21 playing band members and a colour party made up of three student pipers and retired firefighter and DFB museum curator Paul Hand.

After a short flight, we touched down in Brussels Airport, where we met with some of Carl’s colleagues before we were quickly on our way to the beautiful town of Ghent, our base for the next few days.

We settled into our hotel, which was right in the square next to the beautiful 89-metre-tall Saint Bavo’s Cathedral, completed in 1569.

There was no time to waste as we needed to practice as a whole band, ensuring our instruments were both working and tuned after the flight. Our unannounced practice in the square went down very well with locals and tourists alike, who seemed both surprised and delighted with the early afternoon impromptu entertainment. 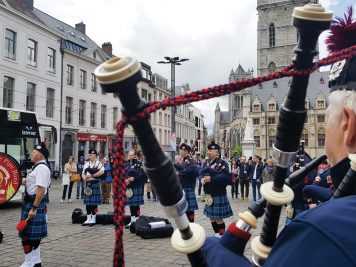 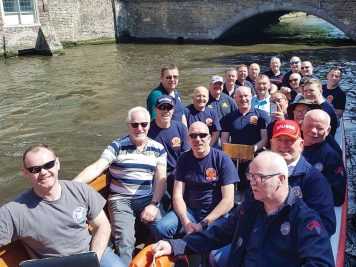 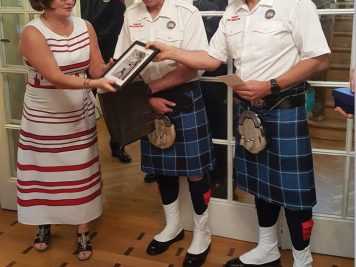 Next we were all aboard our coach and heading into Brussels, where we stopped off for lunch before our first official engagement. We travelled to the beautiful Brussels suburb of Uccle, to the official residence of the Irish Ambassador to Belgium, Helena Nolan.

Ambassador Nolan was hosting a dinner for the outgoing British Ambassador Alison Rose, and the DFB Pipe Band was invited to play at the event. The band played on the lawn and entertained the crowd of diplomats and ambassadors who really enjoyed the music. This was followed by a presentation to Ambassador Nolan of a letter from then-Dublin Lord Mayor Nial Ring, Dublin crystal from Chief Fire Officer Dennis Keeley, and crystal from the band itself.

Following some light refreshments, the band headed back to Ghent and finished off the night with some ceol agus craic.

Early the next day, we were back on the coach for the hour-long trip to visit the scenic town of Bruges. We took time for a canal boat tour with all 25 members on board, which is probably the best way to see and hear about the town and its history. Some of the more energetic members decided to climb the 83-metre Belfry of Bruges, while others relaxed in the sunshine enjoying the famous Belgian beer.

Then it was time to head back to base in Ghent and head out for dinner in the local Irish bar of Patrick Foley’s, where the band played a few tunes late into the night.

Following breakfast, the band loaded the coach with uniforms and instruments before setting off to our next stop, Flanders Field American Cemetery near Waregem. This cemetery contains the remains of 368 American soldiers who died, and commemorates 43 who are missing from battles at the location in the latter weeks of World War I, many in the last few days of the war.

The rows of marble white crosses are a stark reminder of the ultimate sacrifice theses very young men made in ‘the war to end all wars’.

Our next stop was at the Island of Ireland Peace Park in Mesen. This is a beautiful war memorial to the soldiers of the island of Ireland who died, were wounded, or are missing from World War I, during Ireland’s involvement in the conflict. A 34metre replica round tower stands tall there, and is made from the stone from a former British Army barracks in Tipperary and a work-house outside Mullingar. 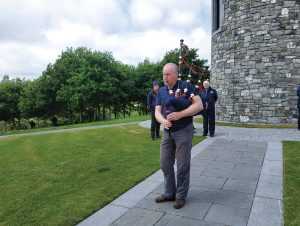 The tower was unveiled on the afternoon of 11 November, 1998, by President Mary McAleese, Queen Elizabeth II of the United Kingdom, and King Albert II
of Belgium. Here, Piper Paul McNally played a lament while Barney Mulhall informed us about the history of the area and the Irish soldiers who died there.

We then headed off to the town of Ypres in West Flanders. Following a short break for a quick tour and some refreshments, the band warmed up. To the delight of the large crowds gathered, the band played and marched through the famous Menin Gate in Ypres. Menin Gate is a war memorial to the soldiers who were killed in the Ypres Salient of World War I, and whose graves are unknown. The memorial marks the starting point for one of the main roads out of the town that led Allied soldiers to the front line. On behalf of the band and Dublin Fire Brigade, Piper Barney Mulhall laid a wreath at this iconic location.

The DFB Pipe Band were very grateful for the hospitality shown by Carl and his colleagues during the trip, and we returned the favour in August when they came to Dublin to visit.

If you would like to join the band or have a chat about it, drop down to the OBI any Monday night from 1930hrs and give it a go! You don’t need any musical experience and we will provide the tuition and equipment.

Our door is always open to new members and past members also. To get in touch with the band, contact any band member or email: dfbpbsec@gmail.com.