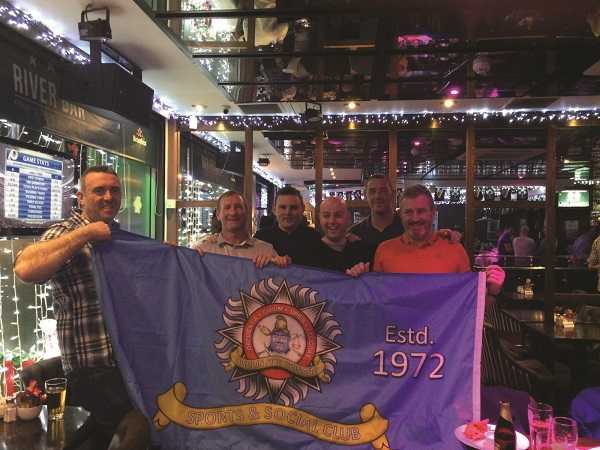 Dublin Fire Brigade is a social organisation – different stations are involved in various events in their local communities, and firefighters across the job are often promoting or taking part in sports, historical or social events in the city. It’s an aspect that the DFB Sports and Social Club is keen to promote and, after a period of absence due to the recession, the annual club nights returned in late 2015, initiated by committee member Paul Marsh from Dún Laoghaire and held in the River Bar on Burgh Quay. A change in the tender process for vendors for events like the kids’ summer party freed up some funds, which Marsh suggested the Club invest in reviving the social nights. “We cover the families with the kids, we cover everything from athletics to cricket – there is a gap there, I think, especially as there are two new classes of recruits,” says Paul.

The first social night of 2016, on November 17th, was held for those on B and D watch, while A and C watches got their turn the following Thursday night – the idea was to bring together those who wouldn’t normally meet one another starting or finishing a shift. Each night featured spot prizes, a certain amount of free drinks and party games, and pitted a member of each watch against one another. “I brought people up and had a quiz – we had a phonetic alphabet quiz for the lads in the control room, questions involving the fire brigade and medical questions,” says Paul. “I got one from C watch and one from A watch, just to get a bit of banter and a bit of craic going. This year, because we had two classes of recruits, we focused on them. I think the recruits enjoyed getting involved.”

Alongside increased attendance on the previous year’s social nights, the Club received a boost in the form of 20 new members. As a result, the social nights are very much back on the Club calendar. “What we’re hoping to do this year is a 999 night – that’s what we used to do in the late nineties,” Paul adds. “We had a couple of them – nurses, guards, firefighters – when we had the Ierne ballroom. They were brilliant nights and I’d love to get them going again.”

Getting to colleagues in DFB is the idea behind these nights out – Paul explains that the fire service is a job in which morale plays a huge role. But it’s also an opportunity to get to know people you might not ordinarily meet. “If there’s good morale you’ll work a lot better…you’re working with guys for 15 hour shifts,” he says. “The next step would be to get to know the people that are in the hospitals, or the guards when you’re out at these incidents. I just think people work better when they know each other that little bit better. You do the 40 hours a week together, but when you get to know them on a social basis as well, you’ll see a different side of them, and I think it helps.”