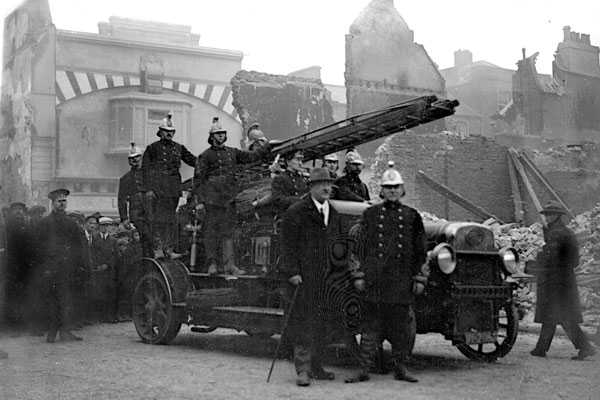 While public centenary commemorations are on hold, we can still remember DFB members’ roles in the events of 1920, writes DFB Historian Las Fallon.

Initially, I had planned an article on the burning of Cork City by the Crown Forces in December 1920, and the DFB response to an appeal for assistance from Cork. I will cover that here, but also want to look at that whole last quarter of 1920 and how some events involved members of DFB in roles that have been overlooked.

Like many historians, I looked forward to this year with great anticipation. 1920 was the year when the struggle for independence became a countrywide fight, and I had hoped the year would be full of commemorations similar to what we saw in 2016 for the centenary of the Rising. COVID-19 has put an end to that, and it has been left to local communities and local authorities to mark the events of 100 years ago.

I was delighted to see the involvement of firefighters from Balbriggan in commemorative events in that town to mark the reign of terror by the RIC/Black and Tans on 21 September 1920. As was almost always the case during the Revolution, DFB did not leave the city to attend that fire, which was considered ‘out of area’.

In his annual report, Captain Myers notes that the Brigade did not attend fires in Balbriggan, an outbreak ‘due to armed incendiarists’. He did not mention that the incendiarists, and indeed murderers on the night, were policemen.

The previous month, on 15 August 1920, an IRA unit had staged its spectacular raid at Kingsbridge Railway Station when they had overpowered a British Army squad guarding railway wagons full of military equipment. The IRA unit captured ten rifles, a revolver and over 1,000 rounds of ammunition before tying up the hapless Tommies and setting fire to the carriages.

On arrival, the Chief Officer refused to intervene on the grounds that the railway authorities and military made no attempt to put out the fire and that it was linked to an industrial dispute. By this period, DFB was not interfering with any military actions by the IRA. I have looked at this in some detail in my books Dublin Fire Brigade and the Irish Revolution (2012) and The Firemen’s Tale (2015) and in articles elsewhere. 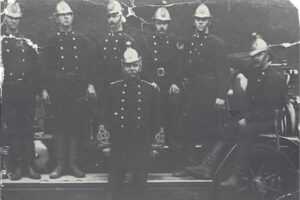 The last quarter of 1920 was particularly bloody. In Dublin, the raid on troops at Monks Bakery on Church Street had led to the capture and execution of 18-year-old Dublin Brigade Volunteer Kevin Barry. The British forces, and especially the Royal Irish Constabulary, had been reinforced by demobilised soldiers recruited more for their combat experience than any suitability for a role as policemen.

The ‘Black and Tans’ – named for their early members being outfitted in a mix of RIC bottle green (almost black) and British Army khaki – and a second group, the Auxiliary Division, or ‘the Auxies’. The Auxies were ex commissioned officers of the British forces, designed to be a special forces-type unit, operating in well-armed, independent companies.

Through November, the Auxies put their stamp on the situation. A priest suspected of IRA sympathies, Fr Griffin of Galway, was abducted and shot dead on 14 November. Four prisoners were bayoneted to death at Scarrif, Co Clare on 18 November, and on 26 November the two Loughnane brothers in Galway were captured by Auxies, tortured and executed by having hand grenades detonated in their mouths.

The Auxiliaries’ first casualties came on 21 November 1920 in Dublin during what became known as Bloody Sunday. Two Auxies making their way to their HQ at Beggars Bush were captured and shot by an IRA unit. The series of IRA executions of British secret service officers carried out that morning had been facilitated by the work of the IRA’s General Headquarters intelligence staff, relying on intelligence operatives, including Dublin firemen, who had carried out surveillance. As one of the few groups who could travel through the city during curfew, they were able to observe the movements of suspected men.

Later that day in a planned reprisal, members of the Royal Irish Constabulary, and Auxies went to the Dublin/Tipperary football game at Croke Park and opened fire on the crowd. DFB ambulances were quickly on the scene and Firemen Michael Rogers and Ned Doyle removed the body of Michael Hogan from the pitch. Another ambulance with 1916 veteran and later CFO Joe Connolly, took another casualty, Michael Traynor from the family home of former Dublin Lord Mayor Nial Ring where he had been taken for first aid by the Ring brothers (themselves 1916 veterans). 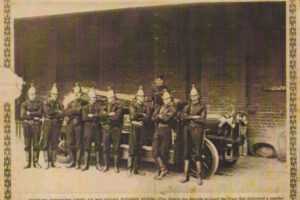 THE BURNING OF CORK

On 28 November an ambush by the 3rd West Cork Brigade flying column at Kilmichael near Macroom wiped out a patrol of 17 Auxies. The British forces were left reeling and prepared a major reprisal on the population of Cork. On 11 December 1920, an Auxie mobile patrol from Victoria (now Collins) Barracks in Cork City was ambushed at Dillons Cross. One Auxiliary, Cadet Chapman, was killed and several others wounded. Very shortly, Auxies and regular British troops arrived and burned local houses, before entering Cork city centre to begin an orgy of destruction. The scale of the fires was soon beyond the capacity of the Cork City Fire Brigade who were fired on by British troops and had their hoses cut by bayonets. City Hall and the Carnegie library were set on fire, and the Chief of the Cork City Brigade appealed for help to Dublin Fire Brigade.

The appeal was received and for the only time during the period it was decided to send an engine and crew out of the city limits. Captain Myers appealed for volunteers and chose Firemen Bernard Matthews, James Barry, Christopher McDonagh, James Keane, Nicolas Seaver, Joe Connolly and Michael Rogers. They travelled by special train and arrived in the early hours of the morning.

The Dublin crew helped to bring the major blazes under control, with Myers and his men amazed at the level of destruction, which they compared to Dublin in the aftermath of the Rising. I have identified Michael Rogers as an IRA Volunteer, as was Joe Connolly, an Irish Citizen Army veteran of 1916, while James Keane is identified in one account as an IRA intelligence operative.

Christopher McDonagh’s action at the Custom House the following year would lead to the escape of four IRA men dressed as firefighters. Again, this is just another pointer to the involvement of Dublin firefighters in our fight for freedom. Hopefully when COVID recedes and we return to some normality, we can revisit some of this year’s lost centenaries and celebrate them with a ‘100+1’ series of events.