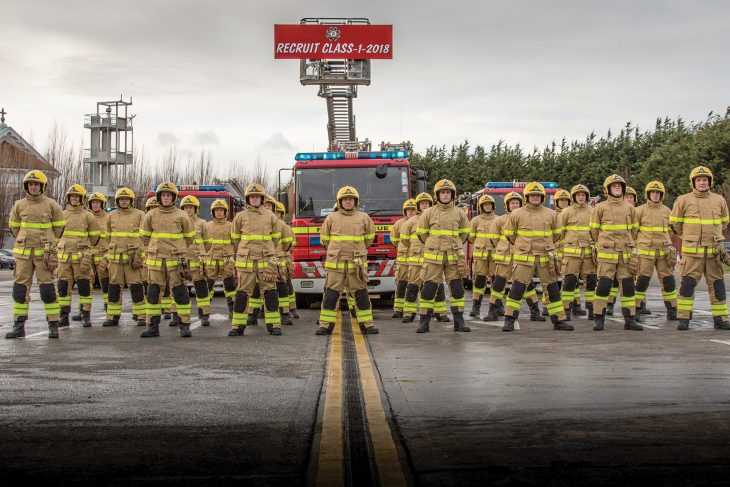 Following a passing out parade at the end of 2018, 27 new recruits have joined the DFB.

On a freezing day at the end of December, 27 recruits officially joined the ranks of the Dublin Fire Brigade at a Passing-Out Parade at the OBI.

Following 25 weeks of rigorous training that began in June 2018, Recruit Class 1/2018 received their scrolls and graduated with the knowledge and specialist skills that equips them to work alongside their firefighter and paramedic colleagues at stations across the city, with many starting their first shift over the Christmas period.

The recruit class went through a total 29,120 work hours to complete the courses involved. That training included three weeks of basic, a three-week breathing apparatus course, one-week Pump Operator course, a two-week RTC course, a one-week Hazmat course, a practical week and two weeks of drill and pass out preparations, while there were also 12 weeks of paramedic training to receive a Level 7 Diploma from the Royal College of Surgeons.

The day itself was kicked off by the DFB Pipe Band before the Recruit Class performed a march in the drill yard. Both Lord Mayor Nial Ring and Chief Fire Officer Dennis Keeley addressed the class before making a parade inspection, and then it was the turn of the 27 recruits to perform a foot drill demonstration.

This was followed by a number of other demonstrations including a ladder rescue, hazmat, RTC, fire and EMS, and given the time of year, these took on a festive slant, with the recruits tasked with rescuing one of Santa’s elves from a number of dangerous situations, which kept the many family and friends present entertained.

It was then on to the business of presenting the scrolls, with the Lord Mayor presenting a silver axe to Best Recruit Matt Crehan.

In his address, CFO Dennis Keeley said: “Dublin Fire Brigade has been providing Emergency Fire and Rescue Services to the citizens of Dublin City and County for over 150 years, and ambulance services for over a century. The history of our service is interwoven with the history of the city itself. We are very proud of our longstanding service, but it also imposes a duty on us – a duty to uphold the traditions and standards of our service.

“Every recruit here today is following in the footsteps of a long line of first responders who have carried the badges of their fire service with pride and honour. You are entrusted with that duty, and I am confident you will carry it out faithfully. I have no doubt that you will continue to deliver a first-class service to the citizens of the city and county you serve.”