Europe in the OBI 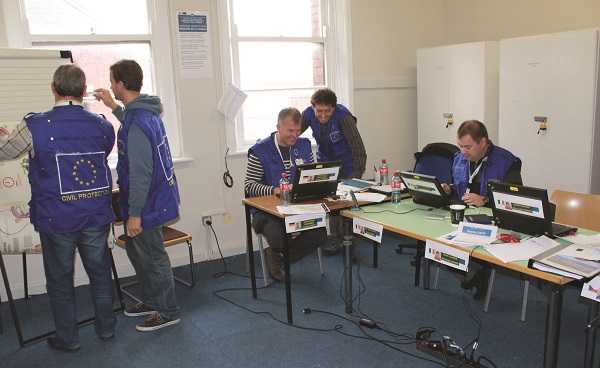 An EU Civil Protection Mechanism course was recently delivered in the OBI, focusing on coordination in the event of a disaster in Europe or further afield.

The EU Civil Protection Mechanism was established back in 2001, aimed at developing and enabling cooperation between national civil protection authorities across the continent. In the event of a natural or man-made disaster, EU member states can send assistance at short notice, with deployed teams undertaking specialised tasks including search and rescue, aerial forest firefighting and advanced medical posts. Any country in the world can request assistance, with over 200 received since its establishment, such as the 2010 earthquake in Haiti, the Ebola outbreak in 2014 and the 2015 earthquake in Nepal.

Alongside coordinating a pool of resources, the Mechanism provides members with the opportunity to train their civil protection teams, allowing for the exchange of best practice and learning to increase effectiveness when responding to an emergency. The cornerstone of this training programme is the Operational Management Course (OPM), the first course specifically aimed at future deployments inside and outside Europe. The eight-day course targets national experts and European Commission representatives who seek to become potential team members or liaison officers as part of a European Civil Protection team sent by the European Commission. The course focuses on coordination and course topics include internationally agreed guidelines and procedures, planning, information management, ethics, code of conduct and the basics of safety and security. Those who graduate are equipped with the skills to function as a full member in an On-Site Operational Coordination Centre (OSOCC – outside Europe) or coordination setting (inside Europe), which facilitates coordination between the various agencies involved.

There is a consortium of five organisations involved in the delivery of OPM training, the German Federal Agency for Technical Relief (THW), the Danish Emergency Management Agency (DEMA); Italy’s Protezione Civile (Civil Protection) department; the Icelandic police service and Dublin Fire Brigade. Ireland, Germany and Italy have been selected as course venues for this cycle of training.

Though the course is normally split into two – theoretical and practical – with each strand taking place in a different country, in 2016 (for the first time) both sections were delivered in Dublin in Dublin Fire Brigade’s O’Brien Institute in Marino. Assistant CFO Dennis Keeley was assigned the overall responsibility for the delivery of the seven day course, with D/O Derek Cheevers managing the logistical aspects of the course. A number of senior personnel from civil protection agencies across Europe took part in the course, which involved a fictitious emergency scenario in a country outside of Europe, known as a ‘third country’. During the exercise the coordination team was deployed to this outside country, met with the local emergency management authority and then coordinated the arrival of dedicated taskforce teams, or modules.

“There are a range of modules within the EU Civil Protection Mechanism, and their deployment to a country is dependent on the type of disaster involved. For earthquakes there are urban search and rescue (USAR) modules, for flooding there are high capacity pumping and flood containment modules,” D/O Cheevers explains. “If there are a large number of people that have been internally displaced and require shelter there are emergency temporary camp modules, if the drinking water supply has been affected there are water purification modules and if a large number of people require medical assistance there are advanced medical field post modules that can be supplied. These are just some of the modules available; there is an extensive list that can be applied to any disaster scenario.” 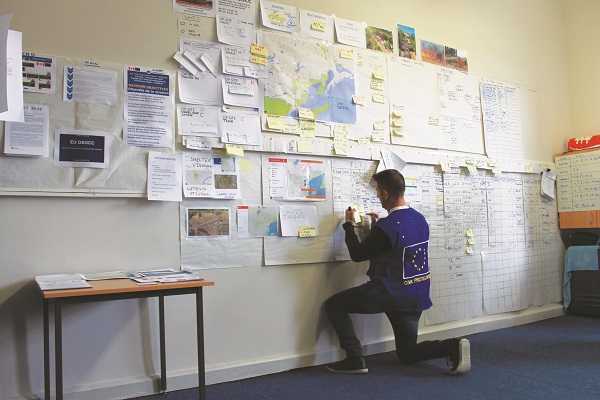 A member of the coordination team in the OBI.

Replicating field conditions is a big part of the course. Over time the exercise becomes more complex, testing the stamina and resolve of the team members, who sleep on camp beds and eat only MREs (meals ready to eat), as many affected countries will lack vital infrastructure. Course participants were required to develop a number of plans covering media queries, safety and security. The exercise also involved the coordination of a controlled evacuation, and meeting with people in the host country in positions of power. “It’s all about preparation, preparing them for a real incident. We try and replicate that as much as possible,” says D/O Cheevers. “They were not outside at any time, it all took place within the building, primarily around communications, meetings and coordination of incoming assistance.”

Though the number of Dublin Fire Brigade personnel who have been deployed under the EU mechanism remains quite small, D/O Cheevers notes that there is still a clear benefit in taking part in the course. Should Ireland find itself in the grips of a disaster beyond our control, and a request for assistance is made, those here who have completed the course could operate as host nation support officers with knowledge of the format of the incoming support – a member could be embedded within one of the incoming teams, acting as the liaison officer between, for example, Dublin Fire Brigade and a search and rescue team.

D/O Cheevers also notes a litany of people without whom the course would not have been such a success. Ably assisted by firefighters Troy Taylor and Darren O’Connor, he also highlighted the fantastic work of James McConnell and Dublin Civil Defence in providing much of the transport over the seven days.

“There are a number of people in the OBI that I need to thank – Brigade Training Officer Gerry Stanley and Assistant Brigade Training Officer Mark Wilson, Breeda Melvin and her colleagues in the office; Jim O’Brien who assisted with a lot of the transfers; Richie (Red) McDonnell who has been fantastic in preparing many of the exercise locations; S/O Martin Cooke who facilitated transport to Dublin city centre using our new double-decker bus for a walking tour of the city and social evening; Caroline Timmons from the IT department in Dublin City Council who worked with the IT experts from Germany in providing the extensive support required for such a course; and Lisa and her crew in the kitchen for the catering, with firefighter Simon Finglas also assisting in this area,” says D/O Cheevers. “We have two courses planned for next year, and the OBI will be a key part of that. It was very much a team effort – we worked long days, but overall it has been hugely successful.”