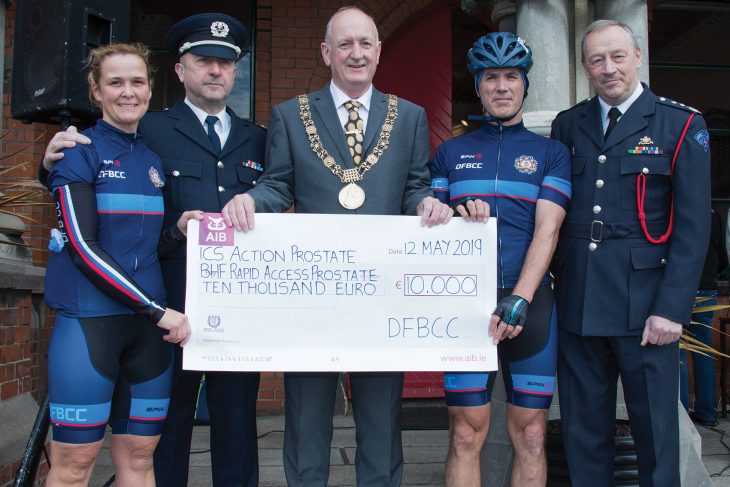 Dublin Fire Brigade Cycling Club has held a number of great events over the years, both at home and abroad. The new committee elected in June 2018 has been actively promoting the DFBCC through station visits, information evenings, a beginner’s programme and training days throughout the year. Initial efforts have already seen an increase in numbers to 115 from a starting point of 68 in June 2018.

A calendar of events was planned for 2019 with an emphasis on improving the health and well-being of our members, and to encourage inclusivity amongst our colleagues, and I thought it would be a good idea to have our own Dublin Fire Brigade Cycling Club sportive, registered with Cycling Ireland, which would hopefully become an annual event on their calendar as well as our own. We set a date for 12 May, 2019, and little did we know the amount of preparation that was needed to get this event off the ground.

We had great support from our families and volunteers to prepare the registration rooms and all of the other OBI facilities. With the pre-event risk assessment and route signage completed on the Thursday with the help of Joe Kiernan, Derek Walsh and Conor Keegan, and the OBI all set up on the Saturday, it was all systems go for the Sunday.

There was a great atmosphere that morning, with a constant flow of cyclists arriving, building up the anticipation for take-off at 10am. Volunteers were everywhere, which was great to see. We had Liz Hanley with all her registration group, Dave Farrington and his motorbike marshal crew, the crew from C watch from No.4 station, all the road bike marshals from the cycling club, Derek Fox with his crew of APs, drivers for the support cars and appliances, static marshals for the roundabout junctions and food stops, and Mick Whelan doing his thing. 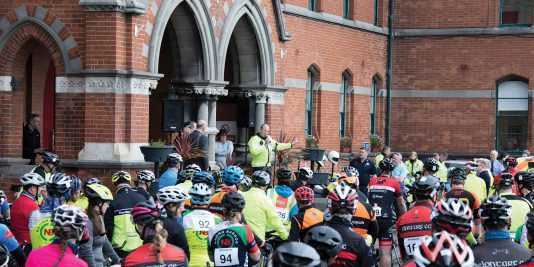 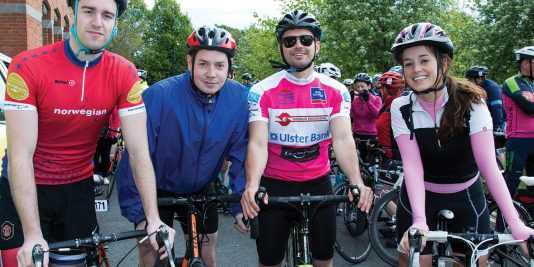 We had no idea of the kind of numbers who would turn up for the event, and were delighted to get a total of 260 registrations with 240 participating on the day.

The event was called “Staying In The Saddle For Prostate Cancer”. With the number of men being diagnosed with prostate cancer growing each year, a lot of those within the DFB, we decided to give all the registration fees to two charities involved in the treatment of prostate cancer: Beaumont Hospital Foundation Rapid Prostate Clinic and Irish Cancer Society Action Prostate. A total of Ä10,555.75 was raised and divided between both charities equally.

The cyclists were keen to get going, and after safety briefings, photos and speeches from myself, then Lord Mayor of Dublin Nial Ring, ACFO John Keogh and others, the Lord Mayor proudly launched the event.

With clear skies and the sound of the DFB pipe band in the air, Superintendent Brian Cullen and his Garda crew, together with the DFB lead vehicle, led us out. An Garda Siochana did a fantastic job of keeping the whole group safe with an escort from the OBI out to the coast road, around the hill of Howth and out towards Portmarnock.

A few at the lead were itching to get going to create a fast time for their 115k, but we had to keep the whole group safe over Howth Head and down to the village first, as the descent was so steep and locals were exiting Sunday mass.

The group then started to spread out and the sportive got into full swing for all the support vehicles, motorbike marshals, road captains, APs and the mobile service vehicle in order to keep the 240 cyclists safe. Both the 50k and 115k routes took us through Portmarnock and Malahide to the first water/ food stop at Swords Fire Station. A big thank you to Greg, Richie and the rest of the lads on duty that day in Swords.

This is where both groups split up, with the 50k group heading back to the OBI via the Malahide road, while the 115k group headed out to the north county to tackle tough climbs through Ballyboughal, Naul, Bellewstown and Ardcath. The 115k food stop was a very welcome sight at the top of the difficult climb at Bellewstown racetrack. A big thanks to Fergus Byrne and his Civil Defence crew for feeding us and for all their help there.

The last two marshals, Mick Whelan and Dave O’Toole, travelled just ahead of the broom wagon with Stephen Dillon and Ian Kelly, as the last 50+ kilometres would bring us to the finish, taking us through Ardcath, Garristown, Killsalaghan to St Margaret’s and home to the OBI. A group including Ginks and Wally had the pleasure of the company of famous Irish cyclist and journalist Paul Kimmage (you might remember his pieces on Lance Armstrong regarding doping on the cycling professional circuit), on the back roads towards Garristown.

Dave Farrington and his crew of motorcyclists did a fantastic job up and down the route, and I also noticed the Cycle Super Store Mobile service vehicle stopping numerous times to fix bikes along the side of the road. I didn’t realise how important this invaluable service would be on the day until I saw what they did. They set up a service station in the OBI for anyone with issues with their bikes before the event. On route, they must have stopped at least 20 times to repair bikes.

It was a tough day in the saddle, but for all those who completed the 50k Challenge and the longer 115k Challenge, there was the reward at the finish line of a tasty meal from Stephen’s Fire House Pizza Ireland, who have been so generous to us over the years.

I’d like to take this opportunity to thank everyone from  the DFBCC committee involved in organising this event, especially Liz Hanley, whose experience and hard work across all aspects of the event was invaluable, and on behalf of the DFBCC Committee to thank CFO Dennis Keeley who allowed us the use of all the DFB facilities. Thanks to BTO Brendan Carroll for the use of the OBI, ACFO John Keogh, and Lord Mayor Nial Ring for their support. Thanks to everyone who registered to support both charities and all those volunteers involved, An Garda Siochana, Road marshals, Stephen O’Brien of Fire House Pizza Ireland, Paddy and John Leyden, Robbie Woodhouse and Jason from Cycle Super Store, Dubco, DFBSSC, DFB staff, drivers, Swords fire station B watch, and DFB pipe band members.

Thanks to everyone else involved, and a special thanks to the DFBSSC for their continued and valuable support.