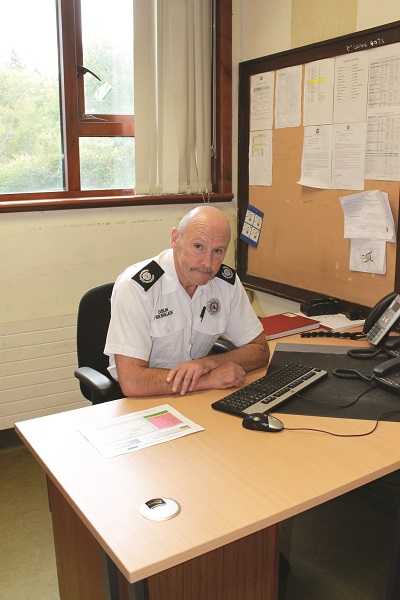 Firefighting rescues and operations involving tall or difficult to access buildings often necessitate the use of either a turntable ladder or a hydraulic platform. Dublin Fire Brigade has recently added one of the latter to its fleet, a MAN SS263 appliance that extends to approximately 86 feet and features a range of updated safety features and increased versatility when compared to the 70-foot SS220 currently in use. “It’s not used instead of a turntable ladder – they both complement one another. The turntable ladder has its good points and the hydraulic platform has its good points,” explains District Officer John Rush, a 34-year veteran of the job who was trained in Kilbarrack and today oversees A watch Alpha District. D/O Rush spent a number of years in Dún Laoghaire fire station – where the hydraulic platform is stationed – as a firefighter, and undertook two weeks of platform training before being asked to instruct on its use. D/O Rush tells me that DFB’s first hydraulic platform went into use during the late 1980s, a 50-foot appliance originally based in Tara Street – Dún Laoghaire became its base of operations following the amalgamation with Dún Laoghaire fire brigade. While the platform can be deployed anywhere within DFB’s jurisdiction, it also goes out any time there’s a general turnout for Dún Laoghaire.

“A lot of the time the platform is used it’s nearly the first thing that is looked for if there’s a big fire. It’s a great piece of kit if you want to work from a height with a water tower. It’s more versatile – there are three booms on it so you can manipulate it a little better,” D/O Rush tells me. “I’ve used it at incidents, especially when I was the station officer in No. 12. I’ve used it to take people off buildings, particularly building sites where perhaps somebody has had an accident.”

Until recently, D/O Rush was the sole hydraulic platform instructor in the job, and his move away from Dún Laoghaire meant less time spent working with the platform on a weekly basis – necessary if you’re to keep on top of its operation. Given that this new platform will be in service shortly, and with D/O Rush coming towards the end of his career in the brigade, he was asked to train a new team of instructors for the next generation of platform operators. Three instructors based in No. 12 were chosen and D/O Rush, working with emergency appliance builder Emergency One, ran a comprehensive course covering the ins and outs of the SS263’s features and operation, including several demonstrations of its capabilities across Dublin City, at Trinity College, on Mary Street and other locations. “It’s versatile and nearly foolproof, but you still have to know what you’re doing to use it safely,” says D/O Rush.

When spoke the new platform was with the Workshop, with a trip to No. 12 with the driving instructors to follow – at 12m long the SS263 is no easy machine to navigate through heavy traffic and narrow city streets. “It’s probably one of the longest appliances in the job at the minute,” D/O Rush explains. “You have to be a bit more careful driving it around – there’s an overhang at the front and then a cage hanging from the back. With some of the smaller streets around the city you may have to be really careful.”

Once the instructors can safely navigate Dublin’s highways and byways, the next step will be training the crew of No. 12 to safely operate the new platform – the set of controls inside the cabin and in the cage, and the vehicle’s jacking system. The latter is one of the most important safety features and needs to be extended correctly each time. Fail to do so and you could wind up with the platform on its side. “If it’s not right and some of the safety features are not adhered to it could easily go over,” he says.

“Normally there’s a crew of three on the appliance – a sub-officer, a driver, and a cage operator. The cage man goes into the cage and goes up, and the driver then operates the jacking and all of the base controls. He’s the important person in the job – it’s really important that the driver/operator has everything sorted and that the platform is jacked properly before it’s operated.”

Once the crew of No. 12 finish their training on the new appliance it will be ready to enter service wherever required. D/O Rush is confident that the platform will boost Dublin Fire Brigade’s capability in responding to high-rise and other incidents. “It’s probably one of the best platforms I’ve encountered in the job,” he says. “It’s a step up again, another level.”