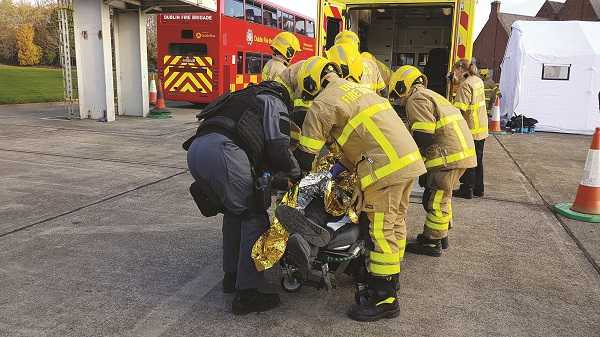 Last November, recruits from Class 1/2016 reported to the OBI as part of their paramedic training, having graduated earlier this year and spent the intervening time in their respective stations. They would be taking part in a mass casualty training exercise that day, a test of their skills in the field based on course objectives which have been set by PHECC (the Pre-Hospital Emergency Care Council) on gathering vital information, delivering a clear picture of the scene to control and command, and designating certain areas for casualty clearance, ambulance arrival, etc.

Several years ago I had the opportunity to attend a similar exercise held in the Phoenix Park, which featured the aftermath of a house party gone wrong. This one, however, was a little different in terms of scale. Though the recruits were told they would be taking part in a mass casualty exercise, they weren’t told what to expect. The brainchild of tutor Joe Brady, one of the first practitioners to reach the scene of the recent shooting in Whitehall, onlookers watched as two vehicles entered the yard at speed, screeching to a halt. A mass of armed gardaí tumbled from the vehicles and spread out, bearing down on the rear of the building where there were reports of shooters inside a nightclub. Following an explosion, several masked men emerged from the building and engaged in a shootout with gardaí. The armed unit then moved into the building, clearing it room by room, ensuring the scene was safe for first responders to enter.

Members of the ERU arrive on scene

Once they got the go ahead, DFB crews began to arrive – some began to assess the emerging casualties, while others entered the building to assess and remove the more critically wounded. With music pumping inside the club, the responders had to focus on the tasks at hand and ignore any distractions – their instructors were looking for mental strength in the face of disorientation and pressure. Outside on the quad a casualty clearance station area was set up, with patients brought in, assessed, and then transferred into the waiting ambulances. Though some might have been expecting a different scenario, a second exercise began with the shooting of the assembled crowd from the earlier incident.

“The exercise was designed to test their response to a mass casualty incident; we were looking at their role as first practitioners on the scene, their communication skills, their ability to do what is called a triage sieve – a first look at the patient and then allocate a triage card. If they’re really badly injured they get a red, if they’re not so badly injured they get a yellow, and then the walking wounded can be brought off to a separate area and then bussed off scene,” explains Paul Lambert, EMS training coordinator in the OBI. “It’s about getting into the practice of encountering something that they won’t come across that often, it’s not normal medicine, they don’t come and treat the first person they see – their job is to categorise all of the casualties and to find out which is the highest priority.”

Understandably, organising this exercise was a complex process, liaising with An Garda Síochána and the Civil Defence. “Joe Brady decided that since it was in the news and something that there is a possibility of happening – an active shooter scenario – he decided on this format. He interfaced with a number of other agencies, the Civil Defence, An Garda Síochána and the Garda Emergency Response Unit,” Lambert explains. “Logistically it was a big ask, because there are a lot of factors to take into account to develop an exercise that will run well.” 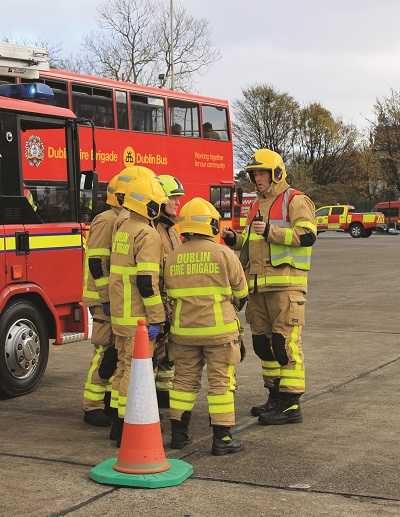 Instructor Dan Fynes readies his crew to enter the building

The first thing to consider was health and safety – designing an exercise plan, conducting a risk assessment, mitigating any potential risks that arose during the planning stage and appointing a safety officer to oversee the process. Ensuring all of the necessary equipment was in place was another challenge – given the scale and scope of the exercise, the organisers needed additional trauma bags, spinal boards, field stretchers, scoop stretchers and defibrillators, and a casualty clearing station. A number of ambulances were also requisitioned from the workshop, placed on standby for use in the exercise.

As the scenario involved a shooting at a nightclub, casualties were also required, provided through the voluntary emergency response organisations. Their varied injuries were made more realistic by the work of makeup students from Dún Laoghaire. The talented students provided moulage [applying mock injuries for emergency services training purposes) – injuries such as eviscerations, penetrating injuries, everything from bruising to a major haemorrhage and eye avulsions, making for a more realistic scene and placing increased pressure on the responders.

“Our first practitioners on scene performed very well, and then our subsequent crews performed very well. It was quite arduous – we had 53 casualties and there were two separate exercises, so it was quite physically and mentally demanding on them. They had to make rapid decisions under pressure and then physically had to remove and treat the patients. It was a lot of pressure for them but we’re very happy with how they performed, and I think they found it to be a very valuable learning experience,” Lambert explains. Thanks are due to all who volunteered their time in coordinating the two exercises, totalling over 100 casualties.

Joe Brady deserves a special mention for his hard work in bringing his idea from concept to execution, liaising with outside agencies and with various elements within DFB, organising the moulage which provided a layer of added realism, and whose effort was vindicated at the end of the day. “I was also very impressed with the tutors in the OBI and the amount of hard work they have done,” says Lambert. “It was a very well thought out exercise, and very well executed.”