First on the scene 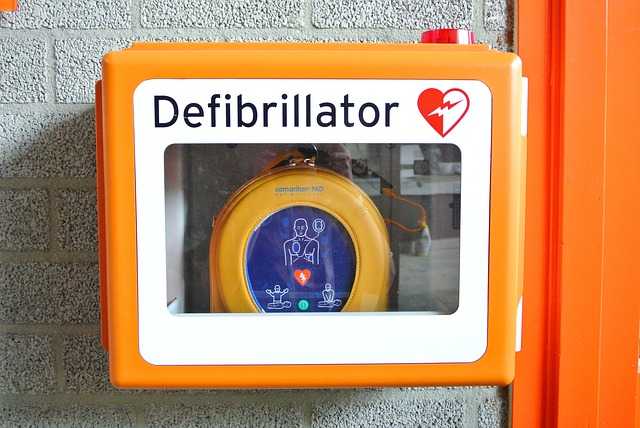 Firecall editor Conor Forrest recently took part in day one of the three-day Occupational First Aid (OFA) course at the O’Brien Training Institute, learning more than he had expected.

It’s not an entirely uncommon scenario. An ordinary member of the public is out walking through the city when they see a man collapsing to the ground, complaining of chest pain and discomfort along with shortness of breath. They might panic, unsure of what to do, apart from calling the emergency services. Or, if they have been instructed in how to give first aid, they could make the difference between life and death, stabilising the patient before the ambulance arrives.

Having been encouraged by a number of people over the past few months to undertake a first aid course, in the event anything might happen at Firecall HQ, I arrived bright and early at the OBI on a sunny morning last June alongside six other trainees, all of whom seemed to work in one of the city’s public libraries.

My first introduction to this new and nervousness-inducing world was courtesy of our instructor for the day, Hugh Keeley, who joined DFB in 1997 and currently serves on C watch in Donnybrook. Despite having studied biology to the Leaving Cert (not by choice), I wondered how I would manage to take in the amount of technical terms and medical information that I was sure would be fired my way throughout the day. I needn’t have worried.

Comprising a mix of practical and easily digestible information on the intricacies of patient assessment, respiratory emergencies and cardiac first response, the course was broken down in a manner that us ordinary folk on the street could understand without much difficulty. Hugh was full of interesting information and anecdotes throughout the day, including the possibility of using a crisp bag to stop air sucking in and to allow blood to drain out following a stab wound to the ribs or lungs, albeit in the absence of a more conventional medical solution.

First up was an introduction to the world of the first aider, from the responsibility of those practicing first aid to regulations and legislation, and we were warned about acting negligently and the need to secure a scene before you begin your work, a lesson which is undoubtedly part and parcel of everyday life in DFB, but may be less than second nature to us civilians. Next up was what we had all been waiting for, the practical demonstrations – checking for a response, carrying out primary and secondary surveys, hauling our makeshift patients into the recovery position, and best practice when dealing with a patient suffering from spinal injuries, among others. 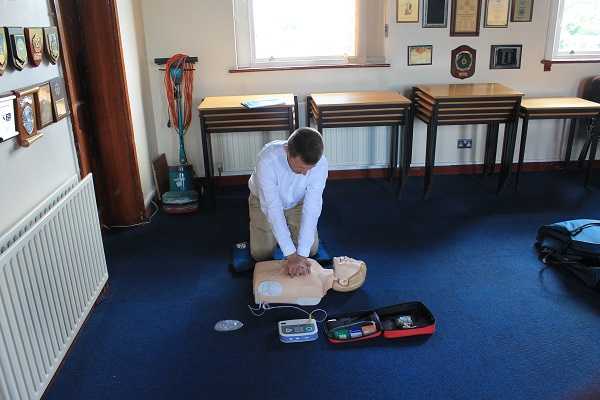 The course includes both theoretical and practical aspects

Speaking to me afterwards, Hugh was very vocal on the need for people on the street with first aider skills, as they provide a vital stopgap while the emergency services are en route. “They are vital. They are the first three links in the chain of survival, and what we do adds to what they have done already. If they’ve got stuck in and they know first aid and they’re able to do as much as they can for the sick, ill or injured person before we arrive, it makes a massive difference to the outcome of the health and wellbeing of the patient. If nobody does anything for the patient or if they’re just left lying on the ground, when we arrive we have a hard job to make things right again,” he states. “The first aider is vital and it’s very important that [they are] in the workplace, in schools and community centres etc. And that they have the equipment – ideally, if the budget will run to it, if there’s a defibrillator in the centre or the school or the workplace, the first aider can start using that long before we even get there, and it might make the difference between life or death.”

As for the course itself, Hugh notes that anybody can do it, with just a few simple prerequisites. “You don’t need anything apart from an enthusiasm and a willingness to learn,” he adds. “So long as you come with the right attitude then we can show you all of the skills over the three days, and you’ll learn a lot.”

While the librarians continued their studies for another two days, my fi rst day was also unfortunately my last. However, it’s fair to say that in that day I learned more about first aid and life saving techniques than I have in my entire life, from the correct way to do CPR to the use of aspirin in cardiac cases. I hope to return some day in the not so distant future to complete the full three-day course and receive my certificate as a qualified first aider – from what I’ve seen and learned, it could be worth its weight in gold.