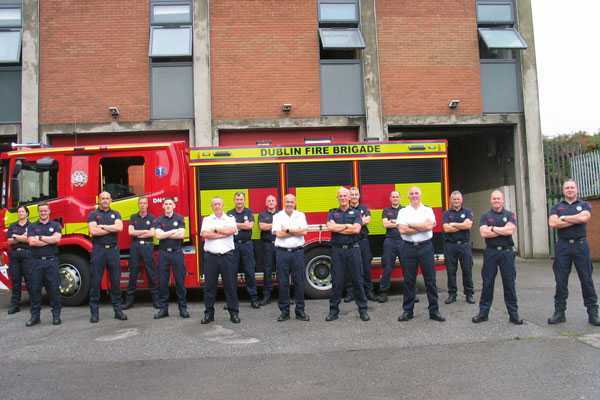 The crew of B Watch North Strand were in flying form when I went to visit them on a rainy Friday evening in July, with jokes and banter flying from the moment I walked in, and more than one of the crew ready and waiting to have their picture taken. The good atmosphere was evident, and is something that each of the Officers I spoke to was keen to emphasise.

I was taken to the office by S/O Conor Keegan, who informed me that Sub Officer Derek Walsh, who he described as “the life and soul”, would talk me through what life is like at the station.

Both he and S/O Joe Kiernan sat down to share their thoughts. D/O Brian Murray was away, so S/O Kiernan was A/D/O for the night, and would later speak about his retirement, which would happen within the week.

There is high energy among the 19 FF/Ps and five officers, and according to Sub/Off Walsh, that is down to the good mix of youth and experience.

“There is a broad range of ages and experience here,” he tells me. “We go from 25 year men down to three year men and everything in between, so it is a quite varied group. We recently got three new recruits assigned to us and they add a bit of life to the station, because they are very active. The young lads are coming in and telling you about how they got on in their match at the weekend, whereas we are all past playing at this stage so we get a good bit of feed off them. It’s great to see because they add a bit of enthusiasm to the job.”

That enthusiasm was clear when we filed out to take a picture, but the current COVID-19 situation has brought in changes that have made camaraderie challenging at times, with mealtimes and gym sessions staggered and strict cleaning measures in place.

“When COVID started people were nervous, and everything just took a little more time to make sure we were safe. But then professionalism kicked in and everyone just got on with the job. The thing with the DFB is that you can’t be looking over your shoulder waiting for someone else to do something for you, there’s nobody else coming, you are it, so you’d better get used to being it, no matter what the circumstance.

“We can’t turn around and ring someone else to do the job, we are the people you ring, the buck stops with us. We just had to learn to deal with it, and if anything happens, we have the procedures in place.”

As well as the Tunnel Response Vehicle that keeps B Watch on their toes in terms of training and preparation, the specialist features of which S/O Kiernan pointed out after we took a group photograph, B Watch at North Strand also has two regular tenders and has in the past few months taken on another ambulance.

As well as covering a very large area, high-risk locations such as Dublin Port, the Port Tunnel and Croke Park are nearby, and added to this, the number of response vehicles here mean B Watch are kept busy.

“The DFB is community-based, and some stations might be busier than others,” S/O Kiernan tells me, “but we have the Port, and the Tunnel, which is highly specialised, and what we do is take care of the community with regards to the safety of these. We have a huge high-risk area to cover, and we need to always be fully prepared for this.”

Sub/Off Walsh adds: “Many other stations of our size would only have one ambulance, but every day we have four people on ambulances and four covering them, so we have eight people at any one time on them, and the ambulances are very busy, stretched to the limits. Having those two ambulances here means that the entire crew are kept very busy as a result.”

With the high-risk areas to cover, the skillsets of B Watch at North Strand are finely tuned and specialised, bringing increased responsibilities.

“Our skillsets are focused on the Tunnel and Dublin Port definitely,” Sub/Off Walsh says. “We have S/O David Lanigan here, which is very important because he is an expert on port operations. He has been on extensive courses to become an expert and we are very lucky to have him here because he knows Dublin Port inside out. We all know a lot about the Port ourselves, but David is excellent in his knowledge and is great in being able to tell us what we need to do.”

Regarding the Tunnel, S/O Kiernan points out that many North Strand personnel trained on Tunnel operations before the tunnel was even built.

“Every Watch would also do at least one exercise in the Port Tunnel,” he adds. “In order to do tunnel operations, you have to have done the training, it’s a course in itself. Some of the junior FF/Ps wouldn’t be able to turn out on the TRV yet, but they will be trained up when they are made permanent here.

Sub/Off Walsh points out that those not yet trained for Tunnel operations can still turn out on the regular appliances and go to the Tunnel. “There is still a job in the Tunnel for them,” he says. “They can go in, but only to certain parts and to do certain things. But there is a specific job that the majority of us at North Strand can do thanks to our training.”

With such responsibility, it is important to have that camaraderie mentioned earlier, but also to know when to be professional.

“There’s always a very good team effort,” S/O Kiernan says. “There’s a lot of banter and we all get on very well, but once we turn out it’s a different story, there’s a completely different management style where everybody follows instructions to the letter. Back at the station we can all go back to enjoying the banter between everybody from new crew members to officers, but everybody knows that when we turn out there is a different procedure to follow.”

Sub/Off Walsh agrees, and emphasises that the crew gets on very well thanks to the efforts they all put in to making B Watch feel like a close-knit community.

They organise an annual football match between themselves and Echo district, which Sub/Off Walsh says they are “glad to have the young lads for”, and many B Watch personnel are also very active members of the cycling and sea swimming clubs.

“Six or seven of us might go for a sea swim after a shift, which is good,” S/O Kiernan tells me. “We are very active in that way, it’s a good activity to do as a group, and we get on really well doing it.”

“S/O Kiernan is the treasurer of the cycling club,” Sub/Off Walsh adds, “and I’m an active member too, as are S/Os Keegan and Lanigan, and we regularly go out after a shift and go for a cycle.”

There is also an annual Christmas party for B Watch and their partners, as well as a trip away. “All of our partners know each other very well now, so we are a very close-knit community here on B Watch,” Sub/Off Walsh says.

“I could have retired two years ago,” he adds, “but I still enjoy coming to work. The lads are good when you ask them to work, and they are good to be around as well.”

S/O Kiernan adds: “If you ask any of the lads, they will tell you the same thing. They all enjoy coming into work and being around each other,” and Sub/Off Walsh agrees. “We have a very good attendance record, a very good sick record. We all help each other a lot, so there is a real family feel to our group.”

He adds: “We are also going to miss S/O Kiernan a lot. I’ve worked with him as a fireman in Kilbarrack and followed him here as an Officer, and I have had a great time working with him. He will be missed.” 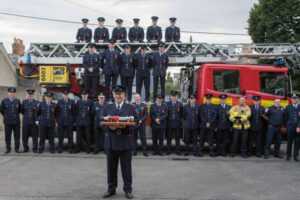 With that, Sub/Off Walsh leaves me to talk to S/O Kiernan about his career and his approaching retirement. A big send off was held at the end of July, with a large number of colleagues gathering at a safe distance to bid him farewell, but when we spoke, he had one week left in the job.

The Kiernan family connection to the DFB is strong, with Joe’s great grandfather joining in 1888, followed by his grandfather, father, uncle, himself, and his brother Frank. His son, a retained firefighter in Skerries, is bound to follow his family into becoming a full-time member.

“We have five generations in the DFB,” he tells me, “so we are committed, to say the least.”

Having joined in 1987, S/O Kiernan spent most of his time in Kilbarrack, with some years as Station Officer in Dolphin’s Barn before returning north of the Liffey again for the last four years, and his vast experience in Tunnel operations has seen him run the Tunnel training courses for the DFB for the past ten years.

“In terms of my career, I can honestly say there were just two days I didn’t enjoy, and they both involved the deaths of colleagues. But other than that, it has been amazing.”

He has, in those 33 years, seen a lot of change, but some things, he says, never change.

“When you pare it all back down, the bells go off, you turn out, and you respond to whatever incident that is. You don’t know exactly what you are going out to, and what you face, but you just do your best. So, while things constantly change, in that respect, nothing has changed at all.”

I also ask how he feels about retiring.

“I’m glad and sad at the same time,” he tells me. “I’m 59 in March, so it’s time for me to stop. It’s also nice to go out on a high. I feel great, but now is the right time. I will certainly miss the job, but I’m looking forward to spending time with my family. I am looking forward to it, but with a little bit of sadness as well.”

When I ask what he will miss the most, S/O Kiernan answers immediately. “The camaraderie. The whole atmosphere of coming into work and being around a great bunch of people. There’s also the going out to an incident and seeing the great work being done, I will miss that.

“I’m still active in the cycling club and there’s all the do’s and events, so it’s not like you are here one day and then have no connection the next. I will still be meeting up regularly and enjoying the benefits of the lifelong friendships I have made. I’d like to thank all of the officers and the crew on B Watch, and in all of my other stations, for making my life very easy over the years. It’s been a pleasure working with them.”