March 17th is an important day in Ireland’s calendar, a day that celebrates the best of what we have to offer to the world. Among those who have become a staple of the annual St. Patrick’s Day parade through Dublin city’s streets is Dublin Fire Brigade, which provides a cohort of uniformed firefighters each year, wowing the crowd with their synchronised marching skills perfected on the drill ground, as well as spotless uniforms and polished medals, and accompanied by the uplifting tunes of the DFB Pipe Band. “It’s a very important day for the fire brigade, it always has been. I’m a member of the DFB Pipe Band as well, and since the foundation of the band in 1985 it was always the view that St. Patrick’s Day would be our biggest event every year,” says Third Officer John Keogh, among those who took to the streets in March.

Alongside a colour party, marchers, and several international firefighters who joined their colleagues in Dublin for the day, the 2017 parade also featured the very first party of recruits from the O’Brien Training Institute, plucked from their training to showcase their newly learned marching skills on a national stage.

“We got them in uniform, and Brigade Training Officer Gerry Stanley marched in front of them with the flag of the DFB training centre, with the recruit instructors leading them off. That was a great event for them, and it got them more involved with life in Dublin Fire Brigade,” says Third Officer Keogh. “Unfortunately they couldn’t participate in the fun afterwards – mixing recruits with trained firefighters at that stage of their training isn’t a good idea. However, the DFB Sports and Social Club arranged a venue for them and they had their own celebrations afterwards. We’ve encouraged them to take part in the parade next year and in parades going forward.” DFB staff and guests from around the world joined the Pipe Band in Diceys on Harcourt Street. The Band wound up providing entertainment to everyone who arrived at the venue, which was recorded and quickly went viral around the globe. “It was a real party atmosphere that was great to be involved in,” Third Officer Keogh says with a smile. 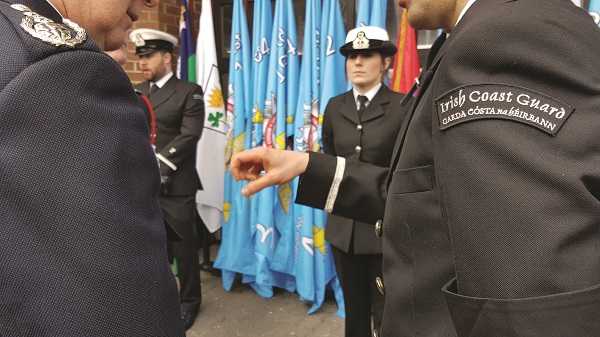 Members of the Coast Guard at the ceremony in Phibsborough, during which the crew of Rescue 116 were remembered

For the past 15 years or so, the annual parade has begun at Parnell Square, marching down along O’Connell Street towards St. Stephen’s Green. As the closest station to the start point is Phibsborough, it quickly became a meeting point for those taking part from DFB, with support on the day provided by the station’s crew, particularly those on C watch.

A more formalised structure to the hours before the parade kicks off has also emerged, with an event held that morning in memory of deceased members of the brigade. Beginning with a reading of the names of those who have passed away, a piper from the band plays a lament, followed by a minute’s silence and a flag raising ceremony where the national flag is raised and lowered to half mast. Each year the names are read aloud by the grand marshal selected to lead the DFB contingent along the parade route, usually a person of note within the brigade who has recently retired. For 2017 DFB historian Las Fallon was chosen, with an additional tribute paid to the crew of Rescue 116 – though three former members of DFB who now work with the Coast Guard were unable to attend as they were working at the site of the rescue efforts, representatives from the station in Howth were in attendance.

“We recognise that they’ve gone through a hard time in the past year. We have a great association with them, whether it’s the crews on the helicopters or the shore crews, in Howth or any of the other stations around Dublin,” Third Officer Keogh says.

This year the marchers were joined, as always, by colleagues from further afield, with firefighters from Westchester Fire Service in New York, Berkeley in California and Dunkirk in France taking to the streets. That diverse make-up is the result of deep friendships developed over the years with organisations including the NY Emerald Society and the Washington DC Emerald Society, and close links with brigades such as Leduc Fire Brigade in Edmonton, Canada. “We keep in contact with them, and very good friendships have developed as a result,” Third Officer Keogh explains. “It can be relaxed and dignified at the same time. Nearly every single year our guests are photographed in the national papers. It’s great for the guys who are participating to pick up the paper the next day and see a picture of our friends from Leduc Fire Brigade or New York Fire Department front and centre.” 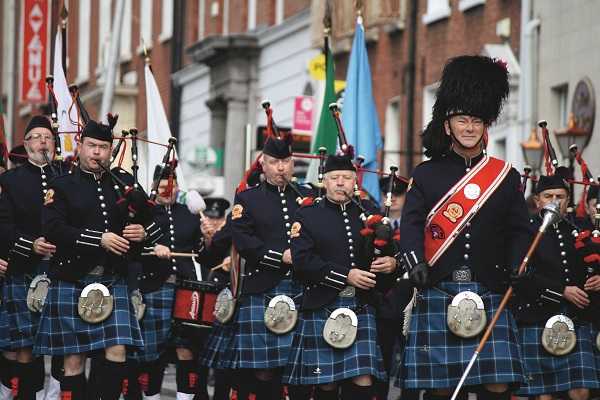 The Pipe Band marched in the parade

In the early years, DFB marched solely as part of the main body of the parade, however of late its participation has grown to incorporate a ceremonial role at the beginning with the Lord Mayor of Dublin city. As part of the tradition, the Lord Mayor leads the parade from the start point in the mayoral coach, accompanied by a representative of An Garda Síochána, the Defence Forces (carrying the national flag) and Dublin Fire Brigade. “It’s a unique opportunity and we’re honoured to represent Dublin in that way. DFB has been here for 150 years, so we’re the lifeblood of the city,” says Third Officer Keogh. “We’re a real integral part of what Dublin city is all about. The people working in DFB go beyond the normal routine as regards working for the citizens of Dublin. And I think that’s recognised when we’re on parade – the cheers that DFB get are continuous, right along the whole route.”

Going forward the plan is to grow DFB’s involvement in events like St. Patrick’s Day, taking inspiration from the State parade in 2016 that commemorated the centenary of the Easter Rising, and which saw 150 DFB personnel take part; and the annual FESSEF parade that marches through the city with representation from all full-time and voluntary emergency services. Last year the Sports and Social Club funded the purchase of flags for each station across the city, bearing their name and date of foundation, and Third Officer Keogh envisions future parades in which DFB marchers carry anywhere between 14 and 20 flags, providing a more spectacular and colourful vista along the parade route.

Plans are also in place to ensure the entire day is an event for all the family, and Third Officer Keogh encourages families to head to Phibsborough fire station before the parade begins, to enjoy the family-friendly party atmosphere in the station and the tunes played by the Pipe Band as they prepare. “The St. Patrick’s Day parade is the biggest day in the Pipe Band’s year, every year. And it always has been,” he explains. “It doesn’t matter whether we’re here or abroad, it’s always the biggest day. There’s no bar on who marches with us. If somebody turns up in Phibsborough fire station and they’re in full uniform, that’s all we ask. It’s a tremendous event for DFB and it’s going to get bigger and bigger.”