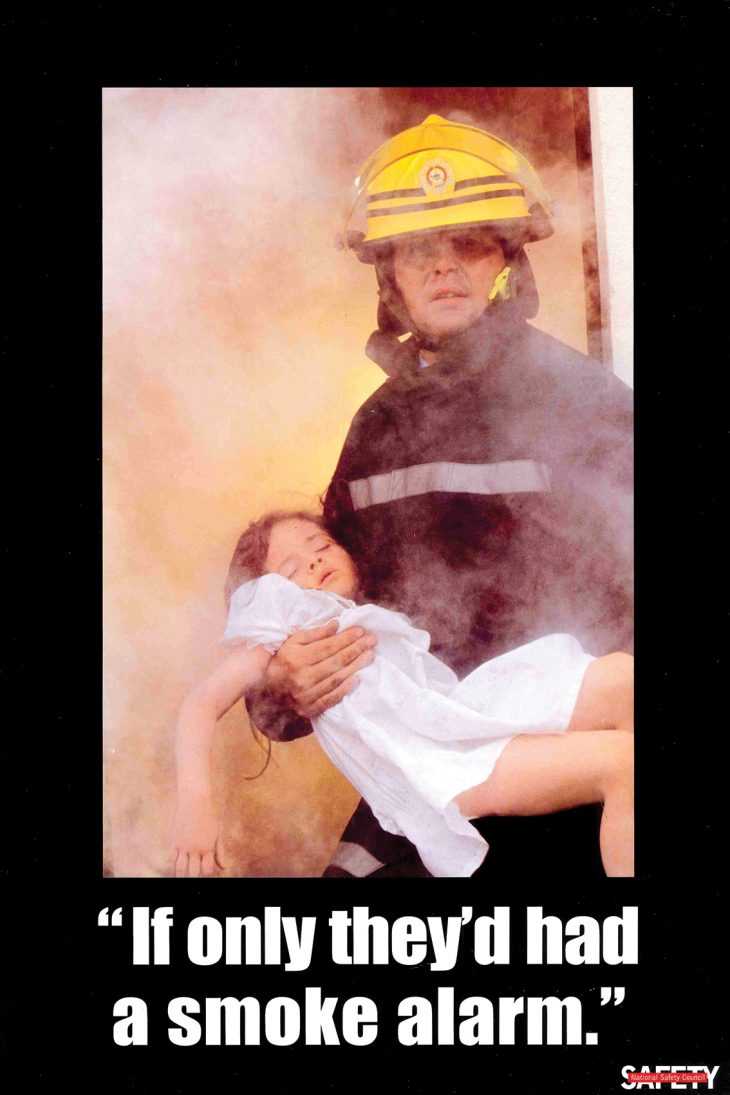 Adam Hyland talks to retired D/O and Fire Prevention Chief Adrian Sutton about his life in the DFB.

Anyone watching TV or taking a bus in the 1990s might find Adrian Sutton familiar, as he made regular TV appearances to talk about fire safety and was the face of posters for the National Safety Council’s campaign to promote awareness around the importance of smoke alarms.

Adrian was a Sub Officer in Tara Street when, in 1992, he was asked to take part in a photoshoot for the poster campaign. “I got an awful lot of slagging about that,” he admits, “but it came about when the Assistant Chief asked if anyone had a young child they could use in a poster campaign for the National Safety Council. I had a niece, who was about five at the time. Next thing, a photographer arranges for me to call to him for a photoshoot.

“The lads were slagging me when they saw the posters because they said they had never seen me so dirty in all my working life, but it was actually make-up and a smoke machine used to create the effect. The lads also knew I had no problem firefighting, and I used to give as good as I got by telling them I was paid a fortune for it, and was getting royalties every year because they were still using the image. It just took off – it was on all the billboards and sides of buses. That was 1994 through to 2008, when the National Safety Council disbanded. So, they got great mileage out of that.”

Adrian had been in the DFB for some time by then, having joined in 1982. “We were the first class to have to do the aptitude test,” Adrian tells me. “But 22,000 people applied for the job, and we sat a paper test, similar to the one done online now. I was in the Civil Service, in the wages department of the P&T, so I was quite good at figures, and that helped me. Obviously, they couldn’t take so many people, but in the end, they took 48 and I was on the panel.

“I was delighted, because I had an uncle in the DFB as well, George Sutton, and I wanted to follow in his footsteps. He was an S/O in Finglas in the 1970s, and I loved sitting in the fire engine, as all children do, when I visited, so I knew I wanted to join.”

Adrian was assigned to C Watch in Tara Street, but after a year he went to Finglas station, then to Phibsboro in 1984, where he stayed until 1992. He completed further training and got promoted to Sub Officer that year, when he returned to Tara Street to work on C and D Watch. He was soon on the move again, becoming an S/O at North Strand in 1996, then on to Kilbarrack as S/O on B Watch until 2004, when he again returned to Tara Street as D/O and Head of Fire Prevention.

“I definitely did the work in my time,” he tells me. “I took the calls in the control room, went out to countless RTCs and fires, and I got a commendation from the Chief in the early 1990s for saving a family of three from a fire on Camden Street.

“Back then, every weekend you were pulling people out of vehicles. That was tough. There was no counselling or CISM. We would all come back to the station and talk about the experience, but we were only human. You just had to get on with it. You get hardened to it, when you see it so regularly. Having said that, there was also great satisfaction in doing your job, especially when you saved a life.

“My son Richard (whose recent marriage is featured in our In Brief section) would agree with all of this, as he is also a firefighter in Finglas, and I’m very proud to have a third generation of DFB members in the family.” 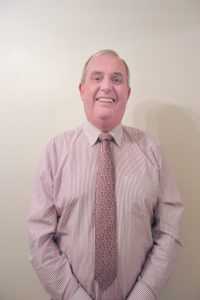 Adrian’s move into Fire Prevention came when a panel was set up looking for a D/O and Fire Prevention Chief to manage fire regulations in building citywide, and to promote awareness. “I was relatively young, only 44, so I didn’t think I had much of a chance,” Adrian tells me. “There were 15 people going for four positions, and there were a lot of senior firefighters who had been in charge of high-profile incidents, so I thought I would never be able to compete. But I made number two on the panel, and with two slots available, I went straight in.”

The new role brought a lot of changes for Adrian. “You were working on your own a lot,” he says, “which I found difficult at first. The shift was different too – three days, three nights, three days off – so it was hard, but it was a good job. Dublin city and county has such a huge Fire Prevention department, and a lot of that is down to the changes made after the Stardust. We worked three weekends in the month, because back then it was mainly the weekend when things got busy. Nowadays, the city is buzzing every day of the week, but there is still the same shift there, so it was difficult to work those hours later on.

“It was a big change, but Jim Fleming had been there since 1982 and he took me under his wing and taught me everything he knew. Pat Fleming was my chief, and he also taught me a lot.”

Adrian was given Foxtrot District – a huge area to look after. “I got the chance to go back to college to do a Postgrad diploma in fire safety practices in Trinity in 2007, and the following year I went back to do a diploma in health and safety,” he says, “and that really helped me, because it meant I could both talk the talk and walk the walk.”

The role involved looking after some 3,000-4,000 buildings, inspecting pubs, clubs, hotels, hospitals, residential homes, nursing homes, as well as concerts and matches. “I had a very good relationship with all of my clients,” Adrian says. “At the end of the day, fire prevention is very simple. You go into a building and see how many fire escapes there are, how many extinguishers, look at the alarms, ask how many people are trained up, and then tell them what they need to do. Managers need to know these things, because in the end it is their responsibility. They might not know all the legislation and codes, but if you tell them, and they do what they are told, then that is the job done.”

Some inspections came about when firefighters would call in regarding a site they had been to, and some of the conditions and lapses in fire safety were hard to believe, Adrian tells me. “One time there was a fire near Croke Park and we ended up taking 175 people out of a three-storey building. It was wall to wall mattresses, because they were all sleeping there,” he says. “We had to close the premises, and in the end, we put a stop to an unsafe practice.

“We also did a lot of fire safety talks at residential homes, schools, etc, spreading awareness around Halloween and Christmas, and did a lot of TV work. I was on The Afternoon Show a lot, talking about the dangers of bonfires, Christmas tree lights, overworked plug sockets. We had a film crew with us in 1998 who shot a half hour programme, so it was good media coverage. Then there were those posters. I think we got the message of fire safety and prevention across very well.”

Because he came up through the ranks, Adrian felt that his position as Fire Prevention Chief was respected. “I knew what I was talking about, I had taken people out of fires,” he says, “and that is important, and is something you see in the DFB, the top people in the job have all come up through the ranks. You can’t buy that experience.”

The work involved in keeping Dublin’s buildings and citizens safe has grown immeasurably over the years, according to Adrian. “My claim to fame was that I retired in 2015, and they had to take on five D/Os to replace me. That’s not true, of course, but they did have to take on five people because of the amount of work that now needed to be done. In the year before I retired, I was asked to inspect every single nursing home in Dublin. That’s a big job, and a depressing job, but also a very big responsibility. But I did it, and other projects like it. I had my phone on 24/7, but I could never turn down a request, and it never bothered me. I was there to help, that was the job.

“You had to prioritise, because there were never enough days in the week,” he tells me, “but having said that, there wasn’t any part of the job that I didn’t like. It is hard on your family when you work a lot of weekends, but my uncle retired as a D/O, so I wanted to get to that rank too.”

Overall, Adrian very much enjoyed every aspect of his career. “Fire prevention was great,” he says. “Showing people what they needed to do to make a building safe. It was enjoyable to have people listen to you and take your expertise on board. But it was also great to work as an S/O with a great bunch of lads.”

Adrian retired in 2015, when he was 55. “I could have stayed until 65 as an officer, but I decided to leave when I did because I had my health and a good pension. I do miss the call outs though, when you had to get hands on, which I did less of as I moved up to D/O. Of course, a call out at 3am in the lashing rain wasn’t great, but that’s what you were getting paid for. I don’t miss the weekends, or the night shifts, but I do miss the camaraderie, and I got great satisfaction in helping save lives.”

Life now is still busy, but in different ways, for Adrian. As well as working a couple of days a week in fire consultancy, he and his wife Caroline breed racehorses from their holiday home base in Wexford, they travel to their house in Nice several times a year, and daughter Carol has three children – Olivia, Katie and Sam – who keep Adrian busy too.

“I have also organised the Annual Deceased Member’s Mass for the last 11 years. I took over from Jim Fleming when he retired, and when I retired the Chief asked me if I would continue to do it, and I also run the Chief’s retired member’s party every year. The lads all really enjoy that. The banter and slagging at that, and in the job in general, is unbelievable. I think that is all part of the job. You have to be able to give it and take it. It’s all part of being in what is a really great job, and it keeps me in touch with the DFB.”