Nutgrove – At the heart of the community 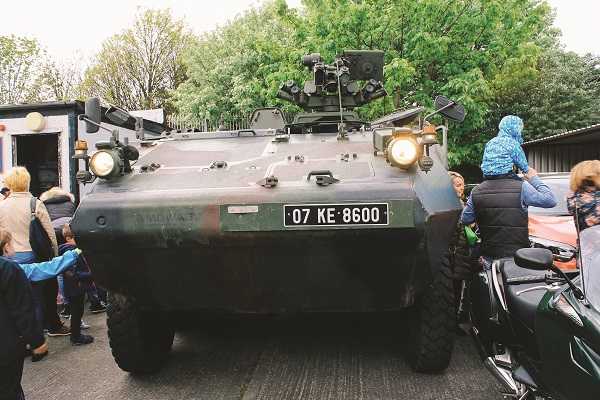 Nutgrove’s annual open day was a huge success, raising vital funds for children with autism and their families.

Back once more for the third year in a row, Nutgrove fire station’s annual open day proved a big success.Showcasing Dublin Fire Brigade and a number of other emergency response organisations, providing entertainment for kids of all ages, and displaying several vintage (and a few modern) emergency services vehicles, proceedings from the day were in aid of Snowflake, a children’s charity that provides support for kids with autism, as well as their parents and siblings, organising social events, support meetings, workshops and other supports.

“It went really well, we had a few new attendees such as Dublin Airport Fire Service, the Defence Forces and the Coast Guard. The Green Goddess vintage appliance also made a welcome return after a break last year, alongside the RSA, BUMBLEance, the Order of Malta, 501st Legion Garrison, Heroes Unite Ireland, two fire tenders owned by Liam Moore, and an ex-Dublin Civil Defence truck owned by Jerry from Dublin Mountain Rescue,” explains Derek Riordan, a firefighter on C watch who has been instrumental in organising the annual open day. “It goes without saying that having CFO Fleming, and three of the Assistant Chief Fire Officers, there was fantastic, a major highlight. It was nice for the senior officers to come and see the fruits of our labour. Dublin’s Lord Mayor and An Cathaoirleach Cormac Devlin attending on the day was another major achievement for us. The day couldn’t have gone better.” 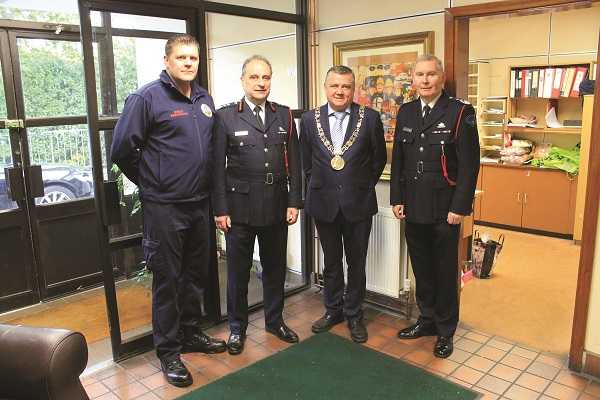 Also there was Blood Bikes East (BBE), which has been in operation since 2012, using a fleet of five bikes and a car donated by Annseley Williams and Skoda Ireland for the year to transport blood and other emergency items out of hours. “We’re full on, full service emergency service out of hours transport. From 7pm Monday to Friday we’ll go from the lock up and around, we’ll get calls from the different hospitals around the city. We’ll use the Pan European bike to go to the country, link ups with other blood bike groups. And then on the weekend it’s 24 hours a day for Saturday, Sunday and Bank Holiday Mondays,” says Denver Breslin, BBE committee member.

As BBE isn’t State-funded, they have to turn to the public to keep their doors open and their engines on. They set up their stall at No 8’s open day to show their support, and also to raise awareness about what they do. “It’s all about visibility and getting the publicity from it. We’re not here collecting today but it’s about getting the name out there and getting the public’s perception of us, because a lot of people don’t actually realise that we’re not HSE-funded or we’re not Government-funded,” Breslin adds. “Anybody that we speak to is surprised that we’re all volunteers, we do it out of our own time, we don’t take a wage. A lot of people are surprised by that.” 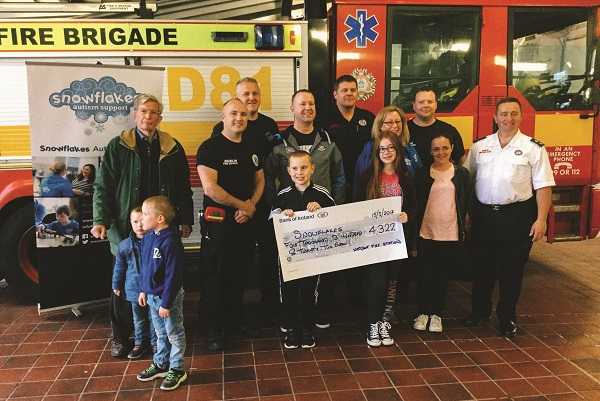 A cheque for €4,312 was presented to Snowflake in early May.

Derek is quick to point out that Nutgrove’s open day is by no means a one-man show. Support in organising the day came from all quarters – the crew of C watch, Dublin Fire Brigade administration, colleagues in the voluntary emergency response groups as well as the local and wider community. An Garda Síochána assisted with the traffic plan to ensure a steady flow on the day; shops like Tesco, Lidl, Aldi, SuperValu in Templeogue and Churchtown and even Dunnes Stores in Citywest pitched in with teas and coffees; DFB itself provided funding for the DJ and face painters. Local woman Alison Behan again lent her culinary skills, providing around 250 muffins for hungry attendees, again refusing to take any compensation for her time and expenses.

In addition, Starbucks in the nearby Nutgrove Shopping Centre sent across two of their employees to help dispense drinks throughout the afternoon, accompanied by shortbread biscuits, cakes, and their own brand of coffee. Any of the money that came in was 100 per cent profit,” says Derek. “I’d like to say a big thank you to Felicity Gill from Dún Laoghaire – Rathdown County Council, she played a major part. The lads on the watch were absolutely fantastic, nobody said no to anything. All of the watches were great, they all contributed in some way, shape or form which was brilliant. We also had a lot of donations from DFB family and friends.”

The result of these efforts, and the weeks and months of planning, was a cheque for €4,312 that was presented to Snowflake in early May and which will undoubtedly be put to good work. “It’s a fantastic cause,” Derek explains. “One of the lads on the watch, his cousin’s son has autism and he was involved in setting up this children’s autism support group. Anything relating to autism, whether it be young or old, is a worthy cause.”