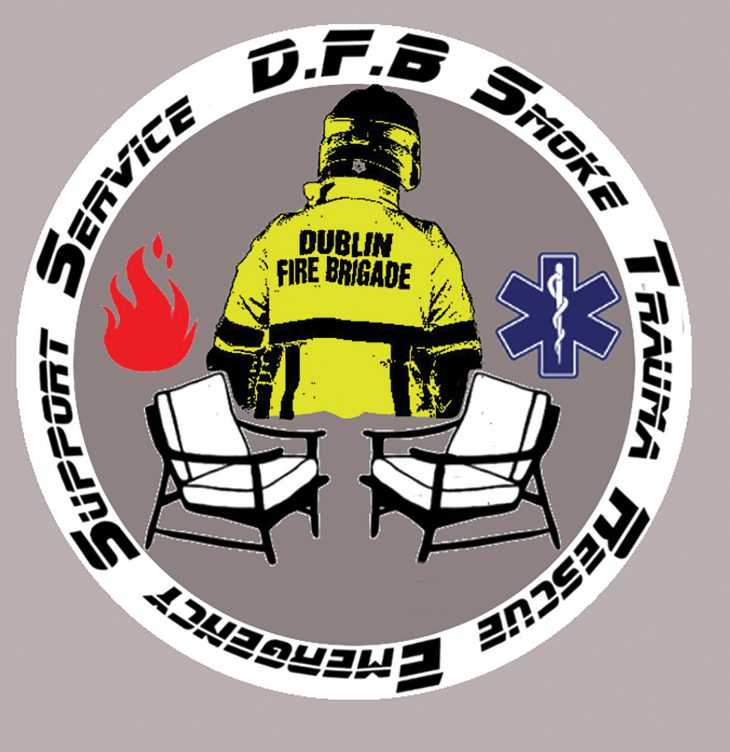 “Our new team is the most diverse we have ever had,” says, S/O Adrian O’Grady, director of the CISM team in the Dublin Fire Brigade and steering committee member of CISM Network Ireland. “It is a great representation of the job, and includes a member of the Pipe Band, advanced paramedics, a member of the retained service, and we now cover all walks of life within the DFB.”

The team of 16, which includes Coordinator Adrian O’Grady and Clinical Director and psychologist FF/P Aidan Raynor, performs what is an integral service to the DFB by supporting their colleagues in times of high stress, and is very highly trained, with each member accredited to the International Critical Incident Stress Federation (ICISF) standards, a worldwide critical body.

“We have to change the team every four to five years to prevent burnout, because they take on a huge load in supporting their colleagues, as volunteers, as well as working the job just like everybody else beside them,” Adrian tells me.

“There is some carry over from the old team, with FF/Ps Michelle O’Toole, Brian Doyle and Brian Gilbert staying on as mentors, but the new team will forge ahead, managing the phones, acting as the first point of contact and helping to deliver our message.”

That message is that Dublin Fire Brigade members can avail of confidential advice and support from highly-trained CISM team members if they are feeling the effects of a trauma incident or stress caused by work or domestic issues.

Set up in 1999 by Mark Brannigan, who recognised that firefighters needed some sort of psychological support because of the traumas faced on a day to day basis, the CISM team has grown in size and importance ever since.

“It was set up in an era when drinking was the alternative, but things have moved on a lot since then,” Adrian says. He took over as coordinator in 2006, and tells me that they have become “a much more professional outfit”, engaging in a number of vital services. “Management has always been very supportive in what we are doing,” he adds. 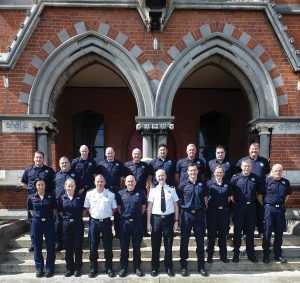 “We have three phonelines that we run 24/7, offering confidential advice and support,” he says. “We also offer one-to-one interventions and a listening ear, as well as diffusions – peer support meetings held as soon as possible after a traumatic incident, which are held on-station. We offer debriefings, which is the big psychological support meeting for large groups after a big traumatic event such as a loss of life. We make sure everyone is doing ok in the aftermath, because every individual reacts differently to traumatic scenarios.”

As we speak, Adrian’s colleagues are delivering a lecture to the new recruits at the OBI, and as he tells me, it is important that all firefighters are aware of the supports available throughout their careers, starting at the very start.

“As the recruits are trained, they are taught about what they will see, what to recognise, what kind of incidents may affect them,” he says. “That creates three elements: That they are resistant to trauma when it does come, that they are resilient when it happens and can bounce back quicker than normal, and that if they are affected, that they can recover more quickly, because they can recognise the symptoms. It normalises their reactions for them.

“Also, we give them access to a recognised support with the CISM team, and they can know they can trust us, because we are all firefighters too, alongside them. We’re not an outside agency they don’t know, we work shoulder to shoulder with them. We have qualified peer supporters and if needs be, psychologists and psychotherapists in our group, trained to operate to a very high standard to provide this support.”

The recruits are also provided with a family CISM information night, which took place at the end of June, which was supported as always by the DFBSSC, in order to introduce the idea that trauma will be a part of their lives.

“The family night has a few purposes,” Adrian tells me. “Firstly, it warmly welcomes families into the DFB culture, but it also warns them that their loved ones are going to be exposed to trauma, and at times they are going to come home a little bit changed, because it does have a crossover effect, whatever happens in the job, they will bring home with them. Sometimes they will come home angry, irritable, closed off, and when that happens, they need to know what to do, we need to equip families for that eventuality, because our job is frontline, and we can’t hide from that fact.

“It also gives the families room to get to know each other, to support each other, and the camaraderie takes off very quickly from there. It’s been great for training. It’s fairly basic, but we continue with more presentations and lectures for the recruits as part of their training. These are more intensive and help to equip them an awful lot more. We go into specific types of incidents, what kind of thing can affect them, a lot more about the symptoms and normalising them, and who to contact. To get to know the CISM team and what we can offer.”

“The message is ultimately that if they have any symptoms, they should contact us, and we ensure they know how to do that. We also have staff support services with Dublin City Council, and they are available to our members as well. There are things we tell them to look for, based on family discord at home. If they are bringing it home with them, that’s the time to ring us, if they are not sleeping well, if they notice dramatic changes in appetite after an incident, those are the signs, so we spell that out for them.”

This continues throughout the career of every FF/P, because the threat of trauma or stress remains very real.

“We try to get around to the stations as often as we can, and our new team is trained to deliver the message,” Adrian says. “We also have posters and leaflets at every station, we have a module on the eLearning platform. The message is constantly going out there, and it reflects in the number of contacts we get. It is constant. One year we got more than 500 one to ones, and this year looks like we will have something similar. It’s busy, but it reflects how busy the job of a FF/P is.

“There’s a lot more shootings, cases of child abuse, a rise in untimely deaths because of the homeless situation, and these are horrific to our members. We have to witness some of those deaths first hand as first responders. It all has an impact, and it is natural to be affected.”

Adrian and colleague FF/P Brian Doyle recently presented their research findings regarding the benefits of the family night and the development of CISM within the DFB over 20 years on the world stage at the ICISF conference in Baltimore. This underlined the importance of having the CISM system in place.

“What our research now shows us is 30% moderate post-traumatic stress in the job. That would be more or less in line with other fire brigades around the world, but it is pretty good when you consider we are an ambulance service as well. The ambulance does add another traumatic level that others don’t have. It’s in line, but it shows we do have the effects of trauma within the DFB, it’s the reality, and we can’t hide from that fact. That reinforces the need for CISM. We need trauma therapists in the future, as do all frontline services, because looking at post-traumatic stress disorder as a disorder of the person is not the way to look at it, it’s a post-traumatic injury, just like a physical injury.”

As well as the three 24/7 phonelines, the CISM team has also been using a CISM alert system designed by Adrian for the last two years. “This is a very important conduit,” he says. “If the call taker in the control room recognises a stressful call, they will send us an alert that we receive on our phones telling us the type of call, the nature of it, and the address. We can know from that the call taker needs support, and what motors or crews need to follow up on the incident. We found that certain calls were not coming through to us, so we weren’t finding out about some traumatic incidents, because the officer didn’t know about it, just the ambulance crew. So that system enables us to be on top of almost all stressful calls. When we brought it in, it was immediately backed up by S/O John Moody and S/O Kevin Finn, and the control room team gave it all the support to run it through the control system. We are the only ones with that system.”

Contact with the CISM team can also be made by officers, who can call after an incident to let the team know of a particularly bad incident, and that a meeting with the crew may be required.

As well as a newly-trained team, the DFB CISM has also launched its own social media presence on Facebook and Twitter.

Under the title of DFB Stress Matters, the Facebook page has grown its reach to 10,000 in the last month. “It’s getting a good uptake,” Adrian says. “Apart from the wellness aspect, we do posts based around education of the job, what it involves, and the risks involved in terms of burnout and trauma, but also emphasise the importance of supporting each other before and after an incident. There is always a psychological side to the messages. It’s educational for the FF/Ps, but also for the public, to show them what the DFB have to go through on a daily basis. We are teaching it to everybody, and opening it up
to everybody.”

On Twitter, the team goes by @Dfbstress, and also promotes the message of wellness and education regarding the job, and the services the group provides.

Apart from that, Adrian is also working with the First Light charity on developing information regarding recently bereaved parents. “We are looking to design a leaflet to assist our members as they manage the aftermath of a child death,” he tells me, “when they have to break bad news, what to do when you have to sit with a parent and wait for other services to arrive, when there is nothing you can do. Because there is something you can do, and we are planning to have a focus group with bereaved parents to see the actions we can take that don’t add to their stress at this horrific moment.”

Meanwhile, the new team will continue to train and refresh their skills regularly, provide support, and help spread the message that
they are available to any DFB member who needs them, whenever they need them.

The 24/7 phone numbers offering confidential advice and support are: