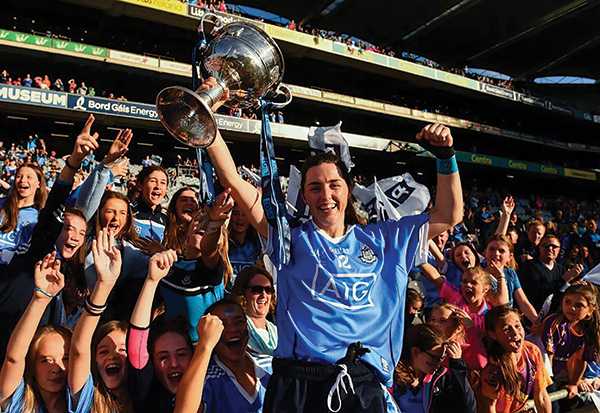 Firefighter and Dublin Ladies GAA star Lyndsey Davey talks about teamwork on and off the pitch.

It’s never easy to find a good work/life balance, but when you do, things can turn out pretty sweet. That’s certainly the case with Dublin Ladies Footballer Lyndsey Davey, who has managed to combine her role as a firefighter in the Airport Fire Service with her hugely successful career as a triple-All-Ireland-winning GAA star.

Having previously worked in finance at Croke Park after completing a business degree at DCU, Lyndsey jumped at the chance to join the fire service at the airport three years ago.

“My dream job had always been to be in the fire service,” Lyndsey tells me. “I wanted to be a firefighter ever since I was very young. As a child, every time I saw a fire engine drive by, I was always drawn to it, but I have always wanted to be involved in helping people, and I always like getting hands on to do that, so it was those things that drew me to the job. When I heard they were taking in recruits in the Airport Fire Service I thought I would apply and see what happens. I was fortunate enough to get the job, and I haven’t looked back since.”

Success on and off the pitch is all about teamwork for Lyndsey, and she finds many similarities between the two. “I actually think that one of the key aspects that helped me get the job in the fire service in the first place was that I was heavily involved in the Dublin team,” she says. “I definitely think the fact that I was able to give examples of when I showed strong teamwork abilities was one of the reasons I got the job.

“Teamwork is a massive part of being a firefighter, especially, for example, when you are wearing a BA, when teamwork, leadership and communication are so important. If you are going into a situation wearing the BA, you are in pairs and obviously depending on the situation, your visibility might be low, so you are relying on good communication, and I think that has a direct correlation with football.”

Asked about the differences between her fire service and Dublin team roles, Lyndsey says: “I guess there is the unpredictability of the job. When you go out to play a match, you know pretty much what you are up against, but when you are called to an emergency incident or are called out to a fire, you tend to only have the bare minimum of details and don’t really know what you are going into. But that’s where you go back to your training and experience and rely on those to deal with the situation.”

The similarities, however, are much more evident, Lyndsey says, and if anything, her job with the fire service has actually helped Lyndsey to thrive on the Gaelic pitch. Not only does her varied role – aviation and terminal emergencies, airfield safety, wildlife management, attending vehicle accidents and running inspections – keep her active every day, but the support of her colleagues and flexibility of her shift work mean she can usually find the time for training and matches whenever she needs to.

“I’m very lucky to work with such a great bunch of lads and ladies,” Lyndsey says. “If it wasn’t for the crew, I wouldn’t be able to play football, because I can get shift cover from any of them and pay them back by covering their shift another time. If it wasn’t for them, I’d be lost. I’m also lucky in that I can sometimes work a shift in lieu and then have the time off to train or play a match, and there is such a supportive working environment full of camaraderie that enables me to do what I do, so I am very lucky where I am.

“It’s great that in work we also have a fully-equipped gym so I can keep my fitness and strength levels up, and that is really beneficial to me and makes a difference because if I can’t get to a training session with the Dublin team, I can do my own session in work.”

That gym work, Lyndsey believes, is one of the reasons behind her success, and that of the Dublin Ladies team. “Fitness has always been a big part of playing GAA, but I have seen a massive difference on the strength and conditioning side of things,” Lyndsey tells me. “When I first started with the Dublin panel 14 years ago, we wouldn’t have done any conditioning, it would all have been pitch sessions. But now we have a dedicated conditioning coach and we do gym sessions as well as pitch sessions every week. There’s a massive demand now for the proper conditioning. You can see the conditioning of players now, especially in our team, they all look so fit and strong, and that is down to the work we do with the strength and conditioning coach.”

That strength and fitness, not to mention an enormous amount of skill and dedication, has seen the Dublin Ladies team and Lyndsey enjoy a lengthy run of success. This year’s All-Ireland final victory over Cork was their second in a row, and while Carla Rowe, the daughter of a DFB member scored two goals, it was half-forward Lyndsey who gave a Player of the Match performance.

“There is definitely nothing sweeter than putting in such hard work all year, training hard for nine months in the gym and on the pitch, and when you get to an All-Ireland putting in a really good performance. It’s very satisfying, especially when you are playing in front of such a big crowd, it’s the biggest day of the year. Everyone wants to play well, but sometimes nerves get the better of you, and sometimes games just don’t go your way. But when you walk off the pitch a winner and you know you have put in such a good effort, you know yourself that you played well, it’s very satisfying that all your hard work has paid off.”

That win adds to a long list of Leinster and Division 1 titles in Lyndsey’s career, but All-Ireland final success is something every GAA player finds extra special. “We lost three finals in a row to Cork, and then we won the last two All-Irelands. I wouldn’t say winning three makes up for the five losses I was involved in,” Lyndsey tells me. “You always look back at those losses with regret and wonder where you might have changed things, and where things went wrong, especially the first year when we were ten points up against Cork. I look back on that one and think, if only we had done this or that, but those losses definitely made the wins more special, because when you have been on the receiving end, you definitely appreciate the wins a lot more. Especially after we lost the three in a row, winning last year was unbelievable, and beating Cork in this year’s final made that a little bit more special too, because we had been on the receiving end of losses to them in the past.” Lyndsey adds: “It made it that little bit sweeter.”

On a personal level, Lyndsey has now won her fourth All-Star nomination and this year was shortlisted for the Player’s Player of the Year Award, but like a true team player, she hoped her team-mate and captain Sinead Aherne would win out (which she did).

“It’s a really special nomination to get, because it is voted on by the players you have been playing against all season, and I think it’s great for Dublin as well that there are two of us up for the award – to have two of us nominated is really special,” says Lyndsey.

“I think this is Sinead’s third year in a row to be nominated. She is a fantastic captain to all the girls, on and off the pitch, so I think it would be lovely to see her get it. She deserves the acknowledgement.”

Recent rumours have suggested that 28-year-old Lyndsey is thinking of retiring from the Dublin panel she has been a part of for half her life, but she tells me she is still “in two minds about it”.

“It’s one of those things where after having won the All-Ireland for the second year in a row and having had such a good year that it wouldn’t be easy to walk away, but I also have to weigh up the amount of commitment involved, the number of injuries picked up every year,” she tells me. “But then there is the temptation of going for three in a row. It’s also a lot easier to say you are walking away than it actually is to walk away, so I will have some big conversations with (manager) Mick Bohan over the next couple of months I’m sure. That will probably happen after Christmas but for now I am just trying to enjoy the downtime and put that to the back of my mind for a while.”

Whatever Lyndsey decides to do, she will be busy in the future. She will continue to play with her club side Skerries Harps, and one day would like to take part in a triathlon, though with a more relaxed approach than she is used to. Before that, though, there will be some more hard work.

“At the moment I am next on the list to do the paramedics course. I’m really hoping that comes up shortly. We do all our training with the DFB paramedics. It takes two years to complete the course, so that will definitely keep me busy because there is a lot of study involved that will keep me occupied.”

Given her career to date, it’s safe to say Lyndsey will only continue to become an even more valuable member of her team.