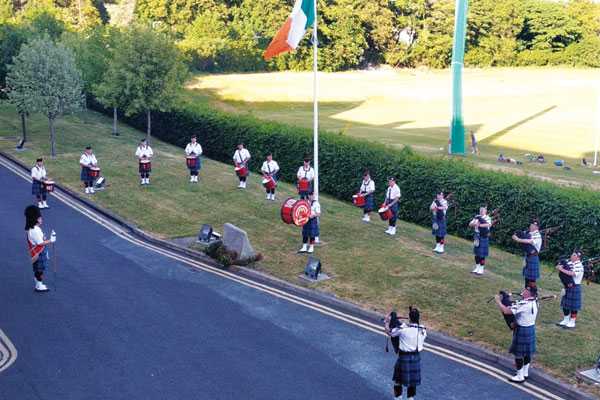 This year, as with every other aspect of Irish and Brigade life, has seen a lot of our traditional band activities hugely curtailed. We’re promised that this is for the greater good – hopefully we’ll see the benefits soon.

The start of restrictions coincided exactly with the band’s intended trip to Savannah, Georgia, for which we had a group of 20 band members and colour party due to travel. A vast amount of logistical work, practice and planning went into this trip, which made it all the more bitter to taste when at the 11th hour the trip fell victim to the pandemic. We weren’t sure what to do with ourselves then, and the sound of the usual band practices and performances in the run up to St Patrick’s Day were replaced with the sound of grown men in kilts weeping into their sporrans.

Band practice and the traditional Monday nights in Marino fell victim to lockdown and restrictions, as we put our shoulder to the wheel in the national effort. A small price to pay, in realistic terms, to help keep the Brigade community, our families and our members safe.

The centrepiece of the band, and indeed every pipe band, is the Bass drum. For those who don’t know, this is the large double headed drum carried on the chest of burly souls like Tom McLoughlin, John McNally and Gerry Condron. This forced repair and maintenance period led the Drum section, under leading drummer Alan Corcoran, to review the bass drum design and ultimately led to the commissioning of a new drum head. This will be the pride of the band for many years to come. The lads are fighting over who will be the first to sport the new Bass at our first post-lockdown performance. 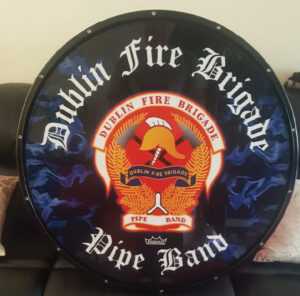 Although the national public health guidelines impacted band activities greatly and may have quietened us somewhat, it hasn’t silenced us altogether. Throughout the lockdown period it became evident that band members, our supporters and the hard-working members of DFB that we are very proud to represent, needed either a morale boost, a thank you or just a plain ‘auld tip of the cap. Take your pick.

So, in an effort to cover all three and acknowledge the efforts of DFB in general we decided to have an impromptu performance, distanced of course, in the OBI. We posted this clip to our social media platforms, with the band playing the traditional Irish air – “Thugamar féin an Samhradh linn”. Traditionally this tune is played at the start of summer, welcoming all that there is to look forward to in the season. We thought it apt to let our supporters, members and the wider community know that this too will pass and that you are not alone!

As it happened, the impromptu gathering-not-gathering gave us cause to celebrate a very special occasion. Since the band’s inception, one individual has remained a stalwart throughout our 35-year history. In fact, I think stalwart is not enough to describe a gentleman who has been a pivotal band member, holding almost all of the executive positions within the band, is a constant at every practice and performance, is both an inspiration and guiding light to younger members, and quite frankly without whom the band would be a lesser organisation. This individual is retired Sub-Officer Paul Shannon. 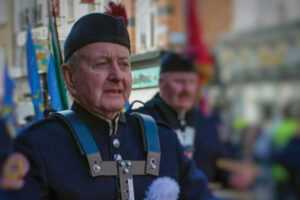 Paul turned 80 in the midst of lockdown. He is a founding member of the band and has been pushing us forward since that foundation in 1985. If there is one word that Paul and his tenor drum know the meaning of, that is dedication. Our motivational performance during the summer gave us as a band the opportunity to wish Paul a happy birthday and to say thank you for his years of commitment to DFBPB and all we stand for. Breithlá Shona dhuit Paul agus Míle Buíochas!

As the pressures of total lockdown eased and restrictions lessened, it gave the band vital room to gather for a short period in a now familiar controlled environment, to practice for a short while, allowing us to keep momentum going with some of our learner pipers and drummers who are advancing brilliantly. Hopefully as we exit this maelstrom and return to pipe band life, we will have a bigger and stronger band to show for it. Keep up the fantastic work lads!

For those who may have been hoping that lockdown has finally killed off the cat stranglers, we’re sorry, we’re still here and we have tried our utmost not to let restrictions interfere with our band duties. From day one the band has been requested to perform at poignant events such as funerals of serving and retired members, an honour we in DFBPB take seriously. 2020 has been no different. While we may have missed foreign trips, St Patrick’s Day parades, local parades and recruit passout, we still strived to fulfil our core duties. Along with playing at what seems an inordinate amount of retirement parades, special mention has to be paid to Seamie O’Rourke, Barney Mulhall, Paul McNally and John Halstead for giving of their time selflessly to perform at these events under trying conditions. 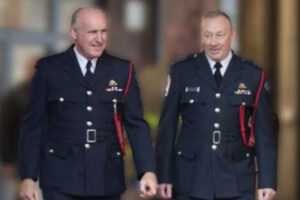 Speaking of retirements, the band’s current treasurer and former pipe major, Paul McNally, retired from service as S/O in No 4 District Station in September. Fortunately, we were in a position to play a small set as a tribute to Paul and his dedication to the band over the years at his off-going parade. We’re hoping the band will stand to benefit more from his increased free time. Go n-eírí leat Paul.

We hope to see you all when we emerge on the far side of this. If lockdown has given you pause for thought – to follow that pastime you always wanted, to try something different or to learn that musical instrument you always wanted to try – then we’ll be here. Monday nights in Marino will return and as always, we’ll be open to all ages, genders and rank from within DFB.

The band can be reached at any time through any band member or by email at dfbpbsec@gmail.com or via any of our social media pages.