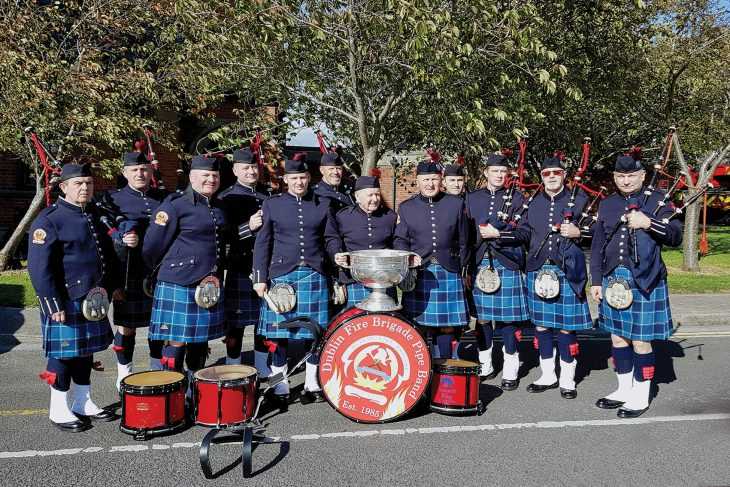 While COVID-19 has put paid to plans, DFB Pipe Band members have been active, and the Band will see many new faces in action soon, writes Secretary John McNally.

Since our last article, the Band have been in a quiet period due to the COVID-19 pandemic. We held our AGM in late November and the new committee was elected with great people on board for the year ahead.

We started the new year with continuing plans for a trip to Savannah, Georgia for the St Patrick’s Day festivities in March. A lot of work was done in the background to plan this trip, with constant communication back and forth across the pond. Unfortunately, at the 11th hour, the trip was cancelled due to COVID-19. We hope to travel to Savannah or elsewhere when the pandemic is over.

We recently received some new uniform clothing from the DFB. Many thanks to Chief Fire Officer Dennis Keeley for kindly donating the items, and to Third Officer John Keogh for organising it.

The Band was given a new home in late 2019 when Third Officer Brendan Carroll kindly designated a new band room in the OBI. The new room is bigger and is easier to access than the previous room, and should make practice and gigs easier for our members.

As mentioned, we have had no gigs since the new year, but having said that, there is always a requirement for solo pipers to play at various events such as the RNLI memorial in Dún Laoghaire in December, the freedom of the city ceremony for Jim Gavin at the Mansion House in January, as well as funerals of retired members such as S/O Bill Murphy, RIP.

Unfortunately, we lost yet another firefighter recently when Dave McLoughlin of C Watch, Finglas, passed away suddenly in early April. Although Dave did not receive the full DFB funeral that he deserved due to COVID-19 restrictions and isolation measures, the DFB nonetheless gave him a send-off that was in keeping with social distancing. Many thanks to Piper Seamie O’Rourke and Drummer Tom McLoughlin who performed at the flag lowering ceremony for Dave at No.3 station.

Also, a big thanks to Pipe Major Mark Toner who played at Dave’s funeral service. While it is never easy playing at a member’s funeral, we are always happy and honoured to take part as a show of support, solidarity and appreciation to the families, friends, and colleagues of DFB firefighters such as Dave. He will be fondly remembered by us all, and the Band send their condolences to Dave’s Wife, daughter, his brother FF/P Paul McLoughlin, Dave’s Mam and his Dad Jack from Dublin Airport Fire Service. Ar dheis Dé go raibh a anam.

There is no doubt that when the COVICD-19 restrictions are lifted and we go back to normality that the Band will be as busy as ever. When that happens, you may notice some new faces wearing the uniform, as we have some learners who have transitioned to playing members in recent months. It is great to see new members on board and this is always a positive for the Band, the DFB and DCC. The Band are forever grateful for the support of associate members, DFB management and DCC. Without that continued support the Band could not exist.

As has been said many times in past articles, we are always here to welcome new members. New blood is vital to ensure that the Band survives into the future.

Whether you are interested in piping or drumming (maybe you would like to try both) the door is always open to new members. So, if you think you have what it takes (or would like to give it a try), why not come along to the OBI any Monday night from 1930hrs and learn a new instrument?

Beginners are very welcome and musical ability is not necessary. We would also like to welcome previous members back as well as people who may already have piping or drumming experience. You will be given top class instruction by our two world class instructors Dave Rickard (Bagpipes) and Ciaran Mordaunt (Drums).

The Band can be reached at any time through any band member, social media or by emailing: dfbpbsec@gmail.com