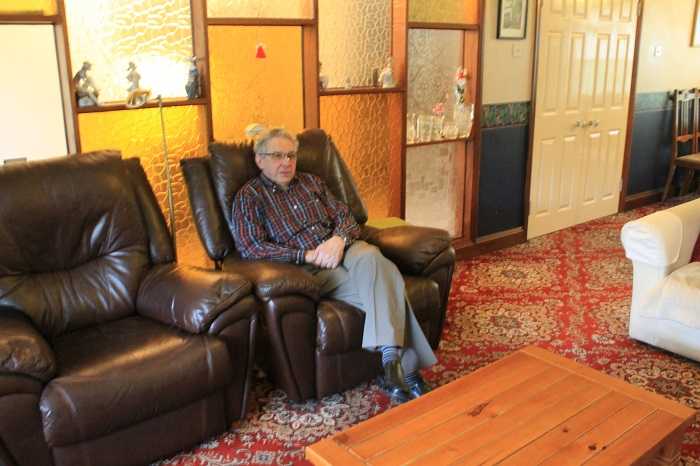 Conor Forrest caught up with retired District Officer Noel Hayden, who spent the best part of his career fighting fires on Dublin’s southside.

In the days when Dún Laoghaire fire station was a standalone unit, yet to become integrated with Dublin Fire Brigade, funds and finances were not so readily available. The process of officially mending or replacing something could be quite bureaucratic, and so it was often easier for a member of the crew to get out their toolbox and mend the broken lock or door. “There was no money for anything, and there was no gear – I had better tools in my car,” recalls retired District Officer Noel Hayden, who spent more than three decades fighting fires in Dún Laoghaire. A Crumlin man born and bred, Noel initially envisaged a life spent working in the trades. Beginning as an apprentice carpenter and joiner in Kennedy’s Bakery, he picked up plumbing, electrical and various other skills in the years that followed, including a stint as a carpenter with the now defunct Modern Display Artists. In fact, the house he and his wife Deirdre (along with their five children) have lived in since around 1983 was built by Noel, his brother-in-law Dennis and colleagues in the brigade at the time.

Though Dennis was a firefighter, the thought of joining the fire brigade had never crossed Noel’s mind. He was working on a job in Kilbarrack Shopping Centre in 1972 when Dennis suggested he join the brigade, and Noel agreed to look into it. A week or two later an advertisement for Dún Laoghaire firefighters appeared in the paper, and Noel’s wife Deirdre duly went to the town hall to collect an application. As they had none printed she was directed to the fire station, where they had none either, though the second officer, Willie Kennedy, accompanied her back to the town hall to duplicate the form. By the time Dublin Fire Brigade launched its own recruitment drive several weeks later, Noel was a firefighter in Dún Laoghaire.

“It was handy enough until I got the pay!” he recalls of those early weeks with a laugh. Prior to joining the brigade, Noel was earning £35 a week with a builder in the city; the fire brigade’s starting salary was substantially less at £20 a week. Couple that with the fact that he had bought a house on the northside and was commuting down, and circumstances were a little strained.

“It was a bit of a struggle when I went into the fire brigade at first,” he tells me. “Then when the petrol crisis came that really knocked the socks off me. The train wasn’t always a good idea, and we didn’t always have the bridges we have now. If you were coming from the northside you had to go around Butt Bridge and right back down the quays on the far side to get to Dún Laoghaire. It was a long, slow trip.” Noel’s first chief in Dún Laoghaire was Kerryman Michael Murphy, who was cautious about needless spending, but had a sense of humour. “One time the chief officer said ‘You’ll have to act station officer tonight’. I said ‘I never did it at night-time before’. Says he, ‘There’s no difference, it’s just dark’!”

Noel quickly became involved with the social side of life in the brigade, joining the Sports and Social Club and spending 20 years on the committee. During that time they formed a boat club and, with Paddy Lee, a benevolent fund. In 1974 Dún Laoghaire hosted one of the biggest annual dinner dances in its history, with around 340 people attending from brigades around the country. “We improved a lot of things – we reorganised the television room in the station and I made seating for it. We got another recreation room that also had bar seating – one of the boys knew somebody who was closing a bar down,” says Noel. 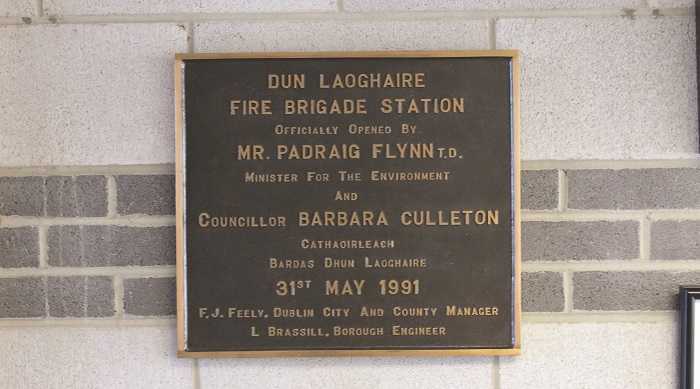 Given his background, and the lack of funding available, Noel would do maintenance work around the station, while lending the mechanics a helping hand from time to time. It was during this time that he became involved with the union, and a committee began to meet with the Corporation manager once a month to voice complaints or request funds. A potato peeler was an early addition, then a dishwasher. A washing machine for PPE was also acquired after some negotiation, and the issue of lighting within the station was a common complaint. “Lights used to be switched off at 11pm in the fire station – it was like being in a reformatory!” he explains with a laugh. “We got extra lights fitted in toilets etc., and generally improved the conditions.”

The funding situation improved under the brigade’s new chief, Tom McDonald, a veteran of DFB. A greater emphasis was placed on training and equipment; the station’s firefighters began with a breathing apparatus course and new appliances were purchased. Sub Officer Christopher Cummins was dispatched around the country, visiting each fire station to see what they had, and made a list of requirements. The result was an impressive emergency tender featuring some of the latest innovations, including radios for communicating with marine rescue, housed in a small onboard control room.

“We did our BA course in the OBI [where his grandfather attended school almost 90 years previous], and other courses too. We did our own pump training in Dún Laoghaire – myself and Aidan Carroll ran that,” Noel explains. Exercises, too, became a regular occurrence, and the crew at Dún Laoghaire took part in one of the earliest Sealink joint rescue exercises in the Irish Sea, conducted alongside Holyhead Fire Brigade, the RAF and the Irish Air Corps. “We continued to progress,” Noel adds. “It was a smaller brigade so it was easier to do, you could train everyone in a couple of weeks.

Despite this increased focus on training and equipment, Dún Laoghaire’s ambulance service ran into difficulties in the late seventies/early eighties. Rewind just a couple of years and there were three Dún Laoghaire fire brigade ambulances operating in the district – two regular ambulances and a fever ambulance. However, staffing issues began to arise and Noel explains how – rather than manning the ambulance for a full shift as happens today – personnel would switch between the fire tender and ambulance throughout the course of a shift.

“You could come back in, get off the fire tender, wash yourself very quick and get into your dress uniform, get onto the ambulance and be out on a call five minutes later,” he says. The ambulance service finally departed in 1982, falling under the remit of Colmcille’s Hospital in nearby Loughlinstown. Though Dún Laoghaire moved to their present station in 1992, and amalgamated with Dublin Fire Brigade in 1994, the station remains the only one in Dublin without an ambulance today. Still, the crew was by no means underworked. The chimney van was one of the busiest appliances in a time when people were still burning the old coal. “When I was there first you would do 15 chimney fires a night. The best thing Mary Harney ever did for the country was get Dublin smoke free [in 1990]. It cut down on the chimney fires, as did the natural gas and gas-fired heating,” Noel explains. 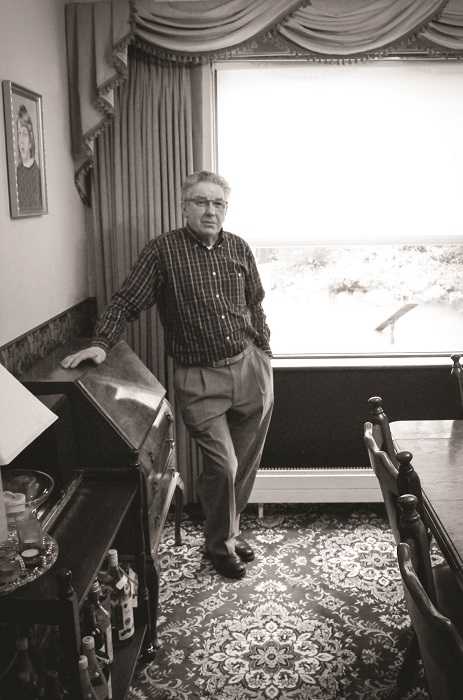 Noel at his home

Noel’s time in Dún Laoghaire lasted 30 years, but eventually he moved on. Having been promoted to sub officer in 1984 (acting sub officer since 1979), and station officer in 1994, he joined Donnybrook fire station in 2003. Three years later he was posted to Phibsborough as the district officer and saw out his remaining years on the northside, eventually retiring in 2009. Throughout that time he has met some great characters (some of whom dubbed him ‘Luigi’ on seeing his jet black hair). They’re the type of people you remember years after you’ve left the job, the type of people who take you under their wing, who make you laugh and learn, and most of all who make the job what it is.

“I’ve worked with some great characters, some very skillful and smart people. I had a station officer, Tim Mahony, he was one of the first station officers I worked for. Myself, Aidan Carroll and a few others, we used to be called Tim’s lads. We had some great times working with Tim. He used to say ‘There’s some equal lads and others more equal!” Noel recalls. There are memorable incidents too – good and bad. Noel remembers a call to attend to a 12-year-old girl who wasn’t breathing. Though they quickly reached the scene she was beyond help, and all they could do was bring her to hospital. “I think that’s the one that sticks in my mind the most,” he explains.

But lives have also been saved. One day Noel was teaching another firefighter how to drive the appliance when they were flagged down – a fire was burning outside a nearby shed with two children trapped inside. Leaving his colleague to operate the pumps and raise the alarm in the station across the road, Noel managed to locate and rescue a young boy and his friend. Three years later, the crew were walking out of the station’s kitchen, and could smell something burning. A house was on fire around the corner and they quickly turned out, Noel circling around the back while several others came through the front door. Spotting a crack in a pane of glass from which smoke was emanating, Noel quickly removed the glass and climbed inside, passing two kids out to safety. With colleagues in BA sets approaching and the smoke getting to him, Noel retreated to the back yard having warned that somebody else was trapped in the house. Then he heard a noise, and he was handed a baby.

“It was the same family as the young lad in the shed – that was the four of them I rescued from fires!” he explains. “I must say, in the 37, 38 years there I enjoyed most of it. I might have had about three bad days, and two of them I can’t remember.” Noel has retired from DFB, but life after is by no means quiet. “The things I miss most are the days off!” he laughs. Still quite handy with a toolbox, Noel is the go-to man in the family and his neighbourhood when something goes wrong. He’s also started a family tradition – his son Rod has been in the brigade since 2004, stationed in Dolphin’s Barn, and thoroughly enjoys the hectic life of a firefighter. “He likes being busy,” says Noel. “He’s happy in his work.

The DFB is providing its usual excellent service in a very unusual time, writes Adam Hyland. The citizens of our...
Read More 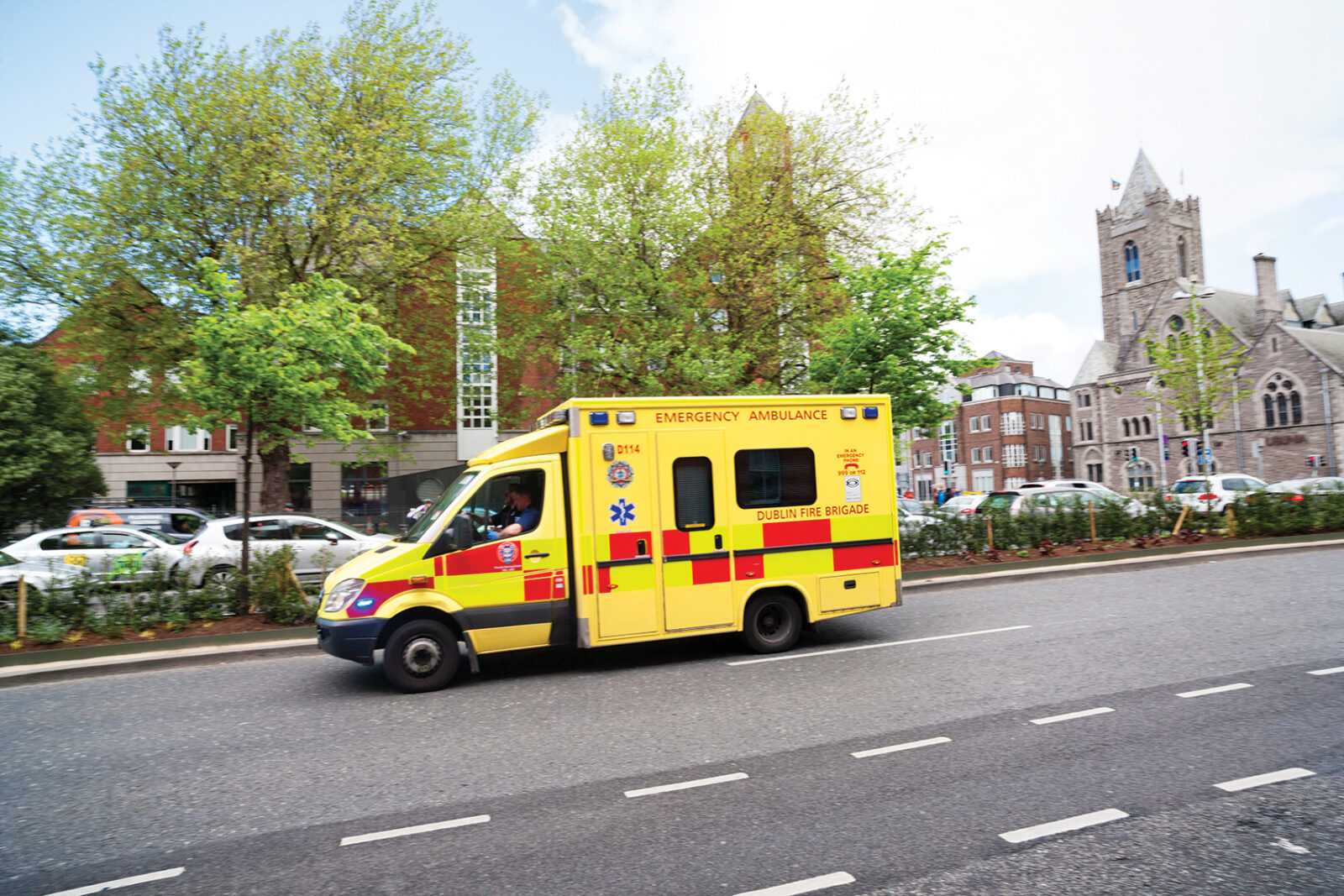 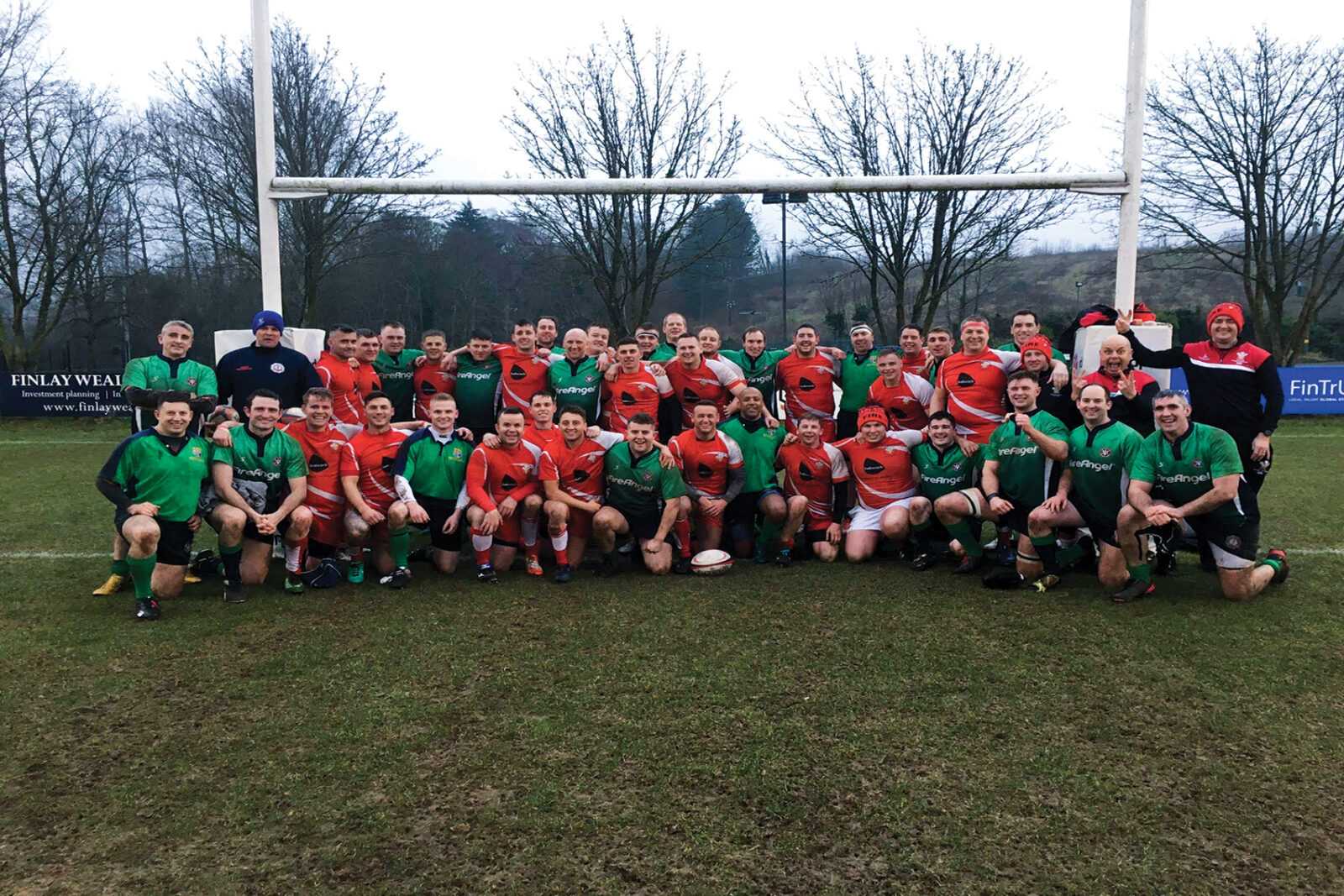 Working with the fire service at the international organisation seeking to discover what the universe is made of is a...
Read More 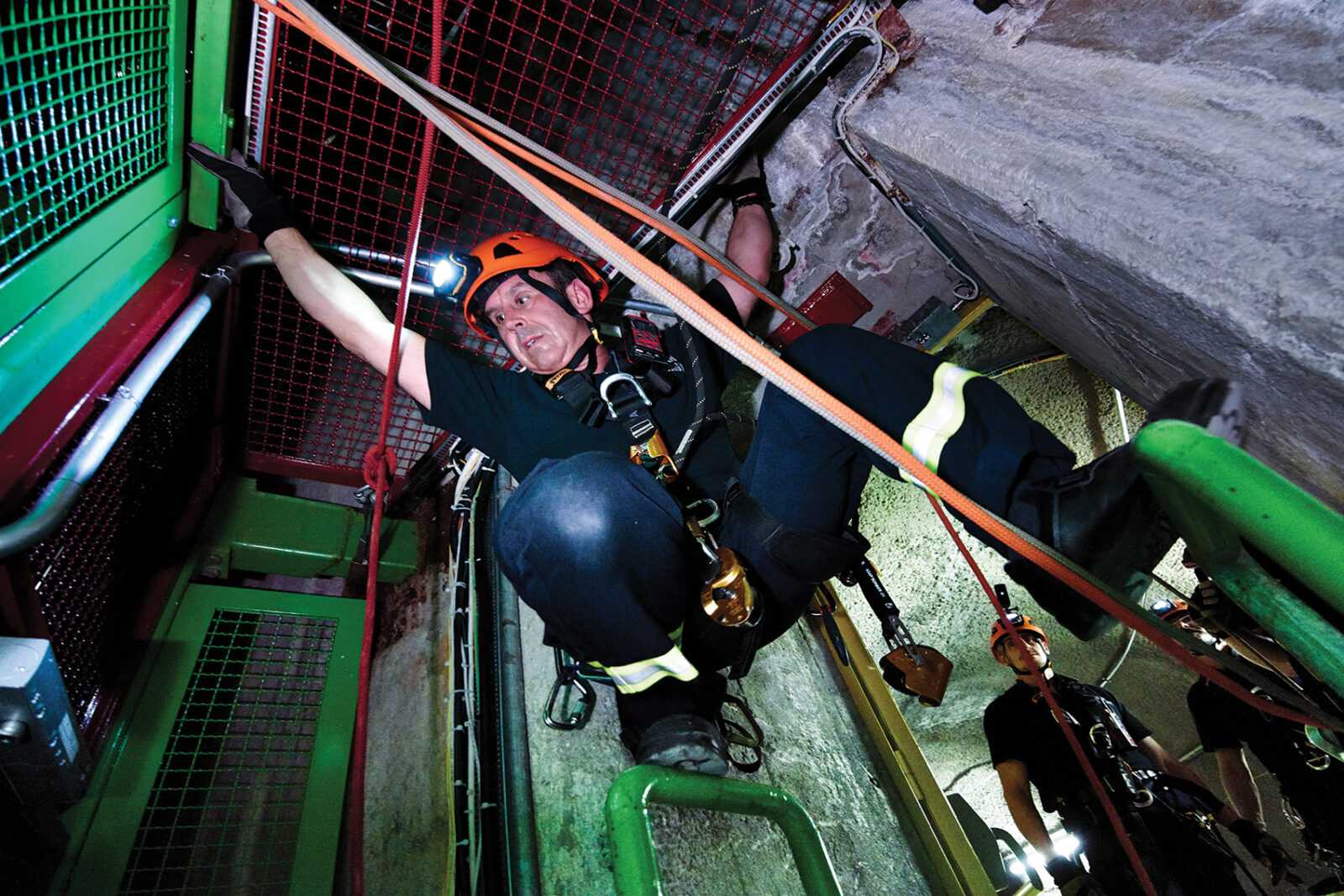 While COVID-19 has put paid to plans, DFB Pipe Band members have been active, and the Band will see many...
Read More 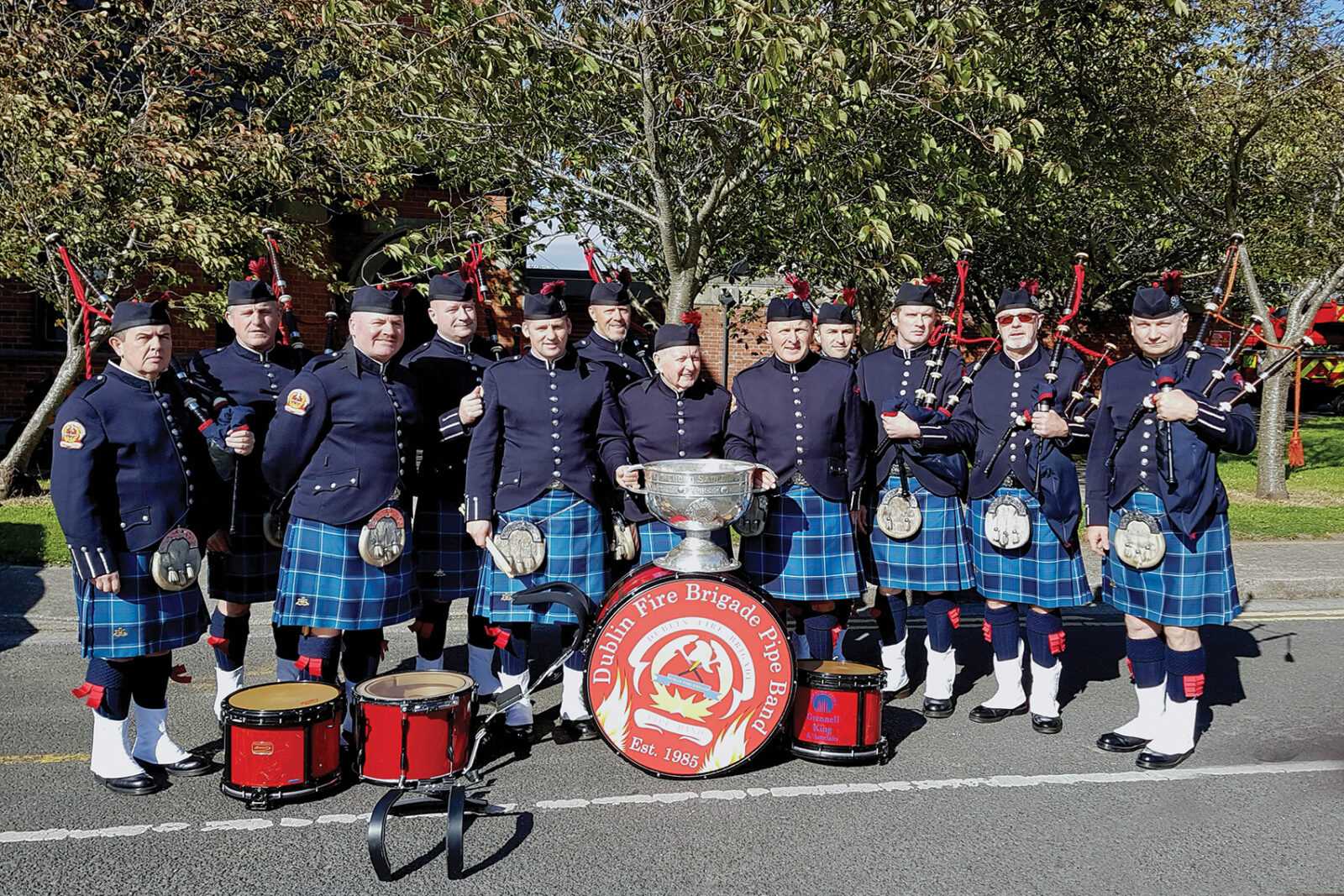 FF/Ps Rachael Lee and Tom Healy were part of a three-person team to make Guinness World Record swim of the...
Read More 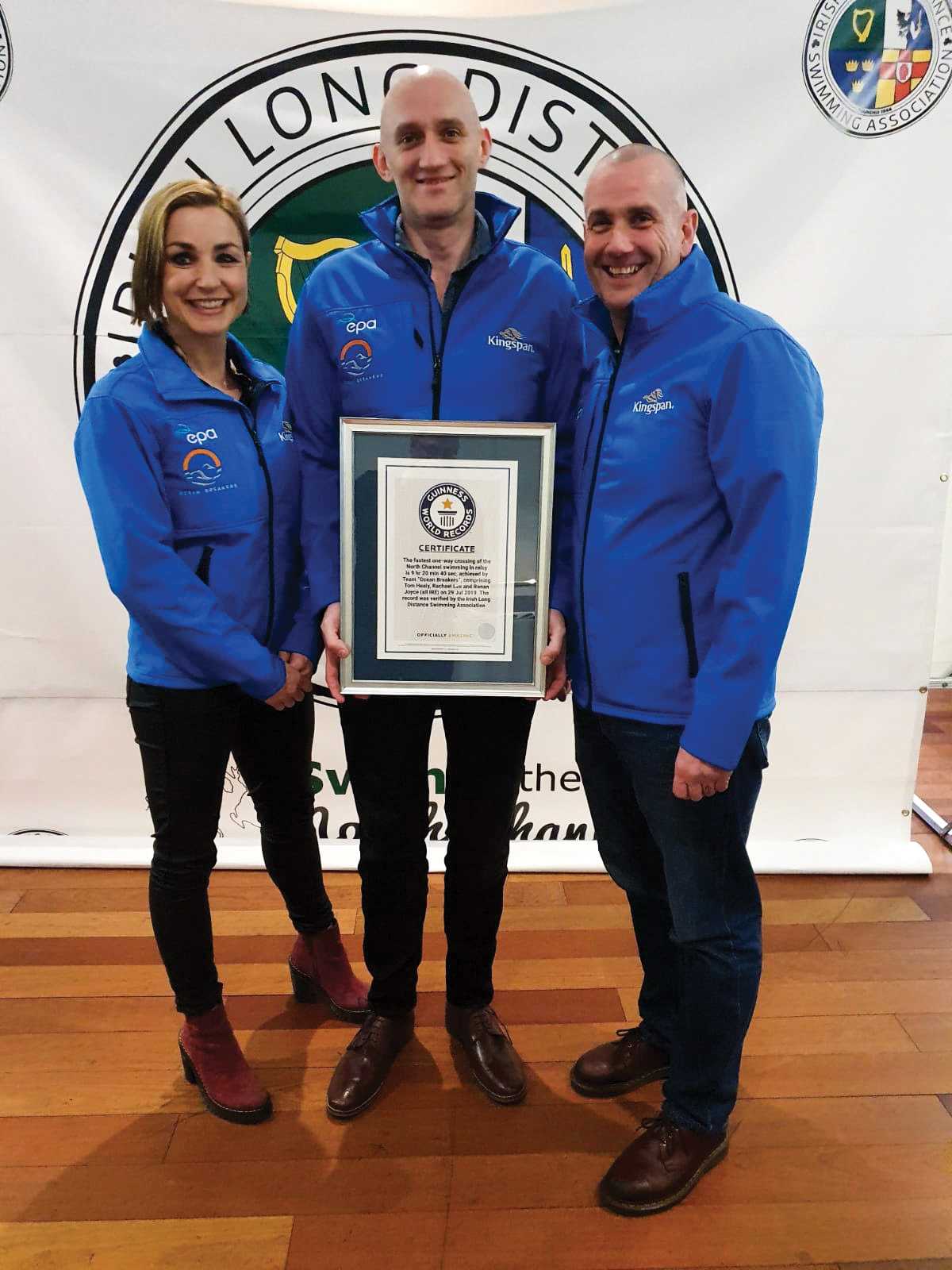 Adam Hyland talks to retired D/O and Fire Prevention Chief Adrian Sutton about his life in the DFB. Anyone watching...
Read More 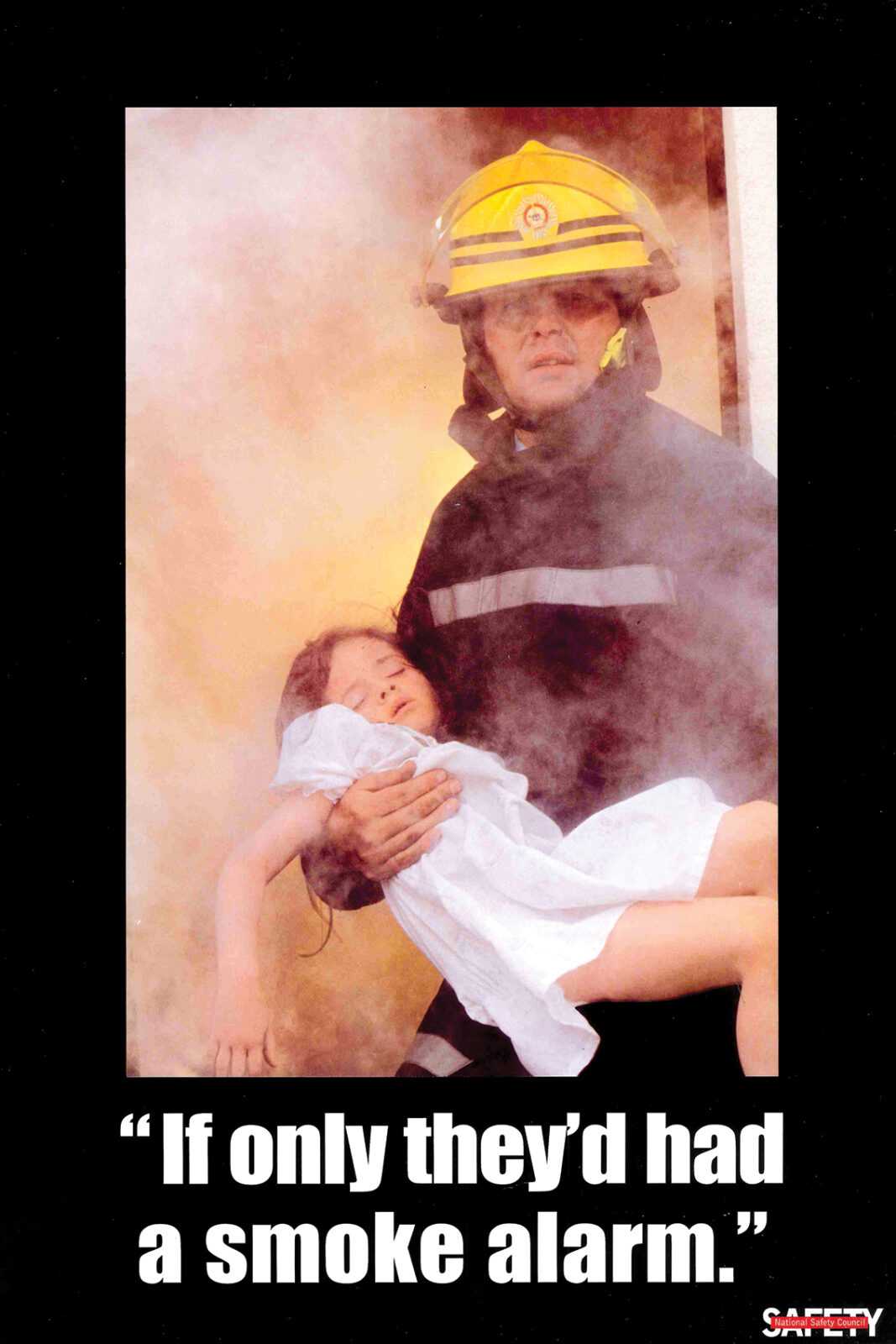 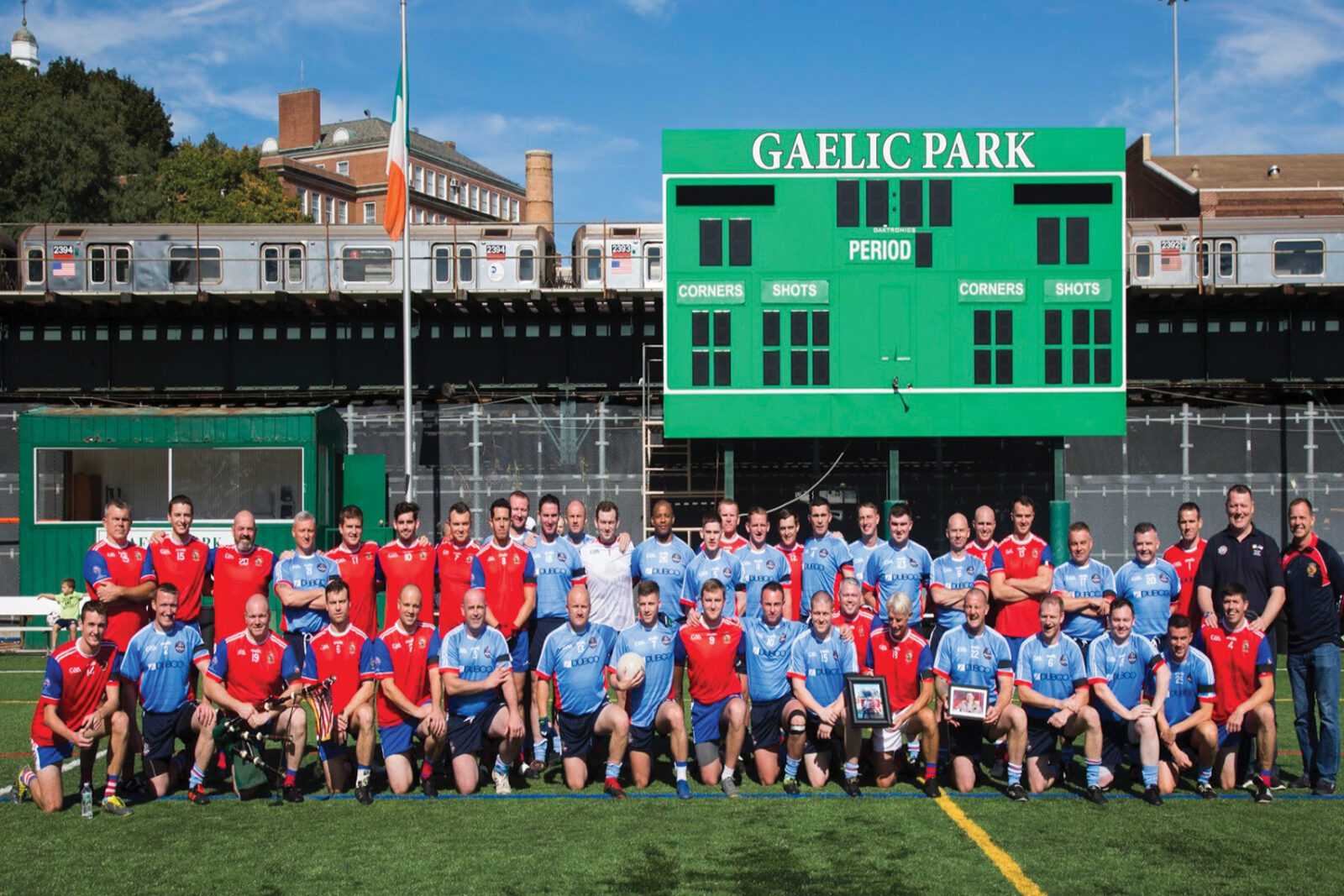 The crew of A Watch Dolphin’s Barn grab some time between call outs to talk to Adam Hyland about life...
Read More 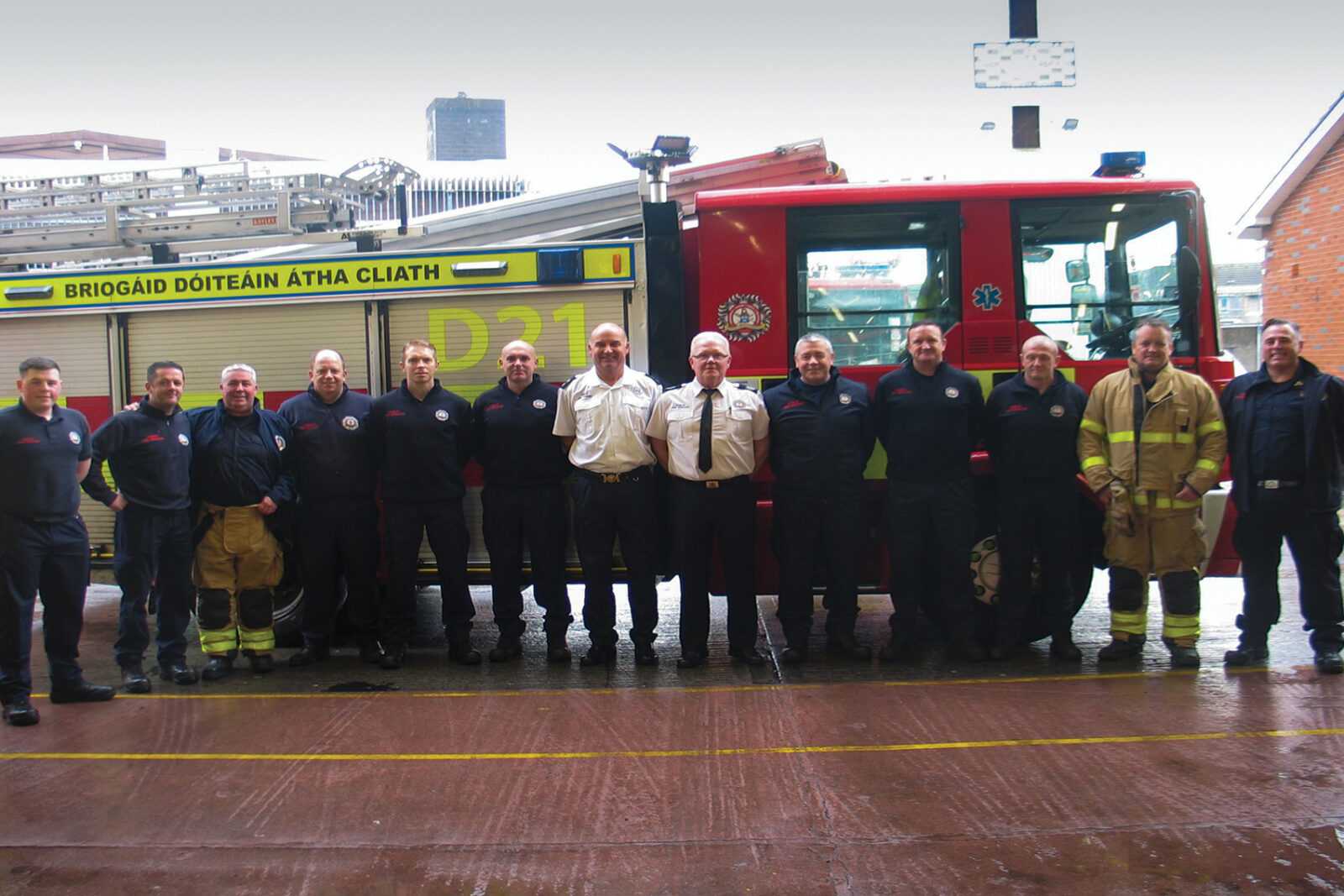