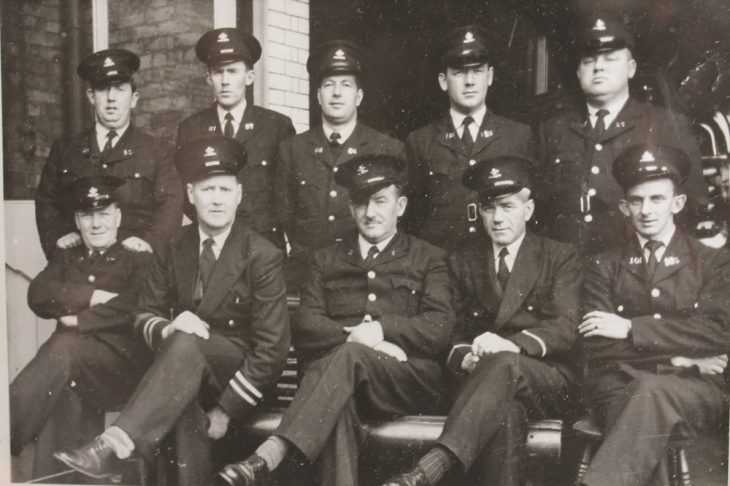 Harry (bottom row, far left) and his colleagues in DFB.

Conor Forrest caught up with Harry O’Keeffe, a former firefighter who spoke about his career with Dublin Fire Brigade, his role as a special service man, as well as his efforts to improve the workplace for his fellow firefighters.

One hundred years ago, a small group of men and women marched out on the streets of Dublin, Enniscorthy and Meath to proclaim an independent Irish Republic. It was an event that would change the course of Irish history, though perhaps not exactly how Padraig Pearse and his comrades in arms would have imagined. It was also the year in which Dublin Fire Brigade’s oldest firefighter was born, three days after rebel leader James Connolly was executed in Kilmainham – one Harry O’Keeffe.

To say Harry has led an interesting life would be something of an understatement. Born in 22 Holles Street in May 1916, he grew up alongside the new State that had its origins among the ruins of Dublin that year. His childhood was a happy one, with a loving family, and among his earliest memories is attending the State funeral of Michael Collins, perched on his father’s shoulders at the age of six.

In those days, jobs were scarce, but he managed to find employment in his early teens, first with Cantwell and Corcoran, which produced soft drinks, where he was interviewed by union leader Jim Larkin about the company’s employment policies. That was followed by a stint with the Grand Canal Company, and then the Calendars Overhead Cable Company – Harry cycled every day from Boyne Street to work in Drogheda, beginning at 4am and camping out during the week as the work moved further from home. Wicklow became a fond destination during his teenage years, particularly Kilmacanogue, and he often cycled there on his own or with friends to a cottage they had rented on the side of the Sugarloaf. Among the first group of girls invited to the cottage was one Teresa Maxwell, his future wife. 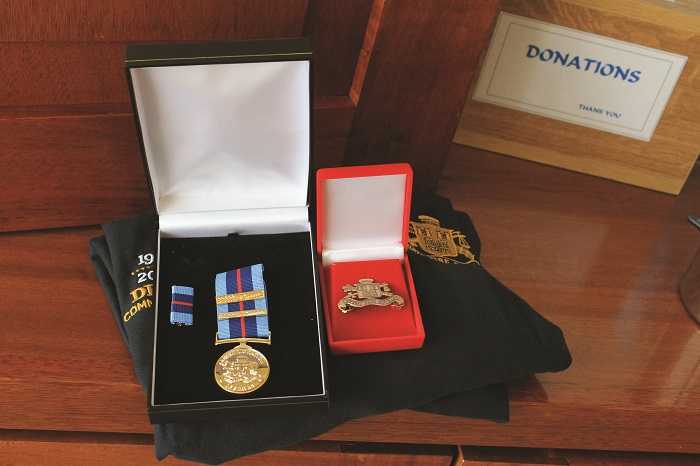 Harry was presented with several tokens on his 100th birthday

Having trained as an electrical and mechanical engineer in his youth, this stood to Harry when an opportunity to join Dublin Fire Brigade arose, halting plans to move to Canada with Calendars. From many hundreds of applicants, only six were ultimately successful – including Harry. The manner in which he secured his job was perhaps an indication of the impact he was to have on DFB. “I was up in Castle Street, I went in before a few men, one of them was the young chief, Comerford. He was doing most of the speaking and he was summing me up,” Harry tells me. “When he was finished, I said ‘do I get the job?’ ‘Do you get the job? We’ll let you know in due time’.” This, however, was an unacceptable response in Harry’s mind. “Says I, ‘I’ve waited a long time to get this far, and I’d like to know where I stand.’ So he talked to the other men and said ‘Well O’Keeffe, you can take it you’ve got the job,” Harry recalls with a smile.

He began his new career in 1938, under the command of Major Comerford, an ex-Irish soldier, and later under Captain Diskin following the untimely death of the former. “Him and I got on pretty well together,” Harry says of Major Comerford. Harry spent the majority of his DFB career in Tara Street as he was what was then known as a ‘special service man’ – because of his electrical knowledge, he was tasked with maintaining and servicing the old fire alarms on the street, which operated before the introduction of telephones.

It was this role that prevented him from travelling to Belfast during the Blitz in 1941 – despite volunteering to travel – as he would have been difficult to replace should the worst happen. Among the many stories from Harry’s career with DFB, that of his role in the bombs that dropped on Dublin during World War II stands out, particularly those that fell on the Terenure area in South Dublin early in the morning of January 2nd 1941. That story was captured in The Bombing of Dublin’s North Strand: The Untold Story by Kevin C. Kearns, as explained by a colleague of Harry’s who joined DFB at the same time, Paddy Walsh.

“This bomb hit the end of a terrace of houses, at the back garden. Made a crater in the garden and the house fell in, but not much fire. They were up-market houses, a place where there was a Jewish settlement. A woman was trapped there, in her bed. The roof had collapsed down and the joists were all criss-crossing on the bed,” Walsh recalled. “Now I was just five foot nine but another lad with me was a hardy fella, Harry O’Keeffe. So we got in and everything was in a heap, the front of the house was still intact, but the whole back was down. There was one joist holding most of the roof still on. So he got down on his hunker, if you like, and held it. Then he says to me, “I’ll hold that and give you time to get in.” 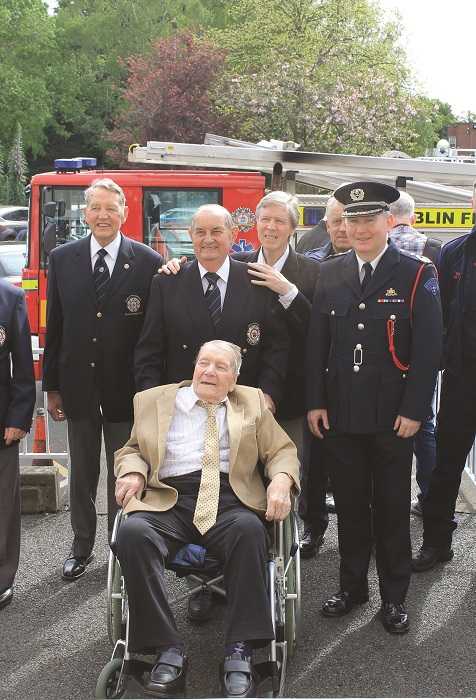 Workers’ rights were extremely important to Harry, and he expended great effort in agitating to improve the position of firefighters in Dublin, quickly developing a reputation as a force for change. When he first joined the fire brigade, firefighters brought food with them to work. However, noting that their counterparts in the UK and Northern Ireland had modern catering facilities where Dublin did not, Harry took the cause to City Hall, fighting long and hard for a mess to be provided for the stations.

“It was disgraceful the way the Dublin Corporation treated the working men that had to be fed. There’s not a place in the world that has their staff in but they make some provisions to feed them. I took it up to City Hall and I had a row with one of the officials there,” he explains. That particular official had the temerity to enquire as to whether the firefighters would like their daily dinner at the Gresham Hotel. Harry struck the table and said he would get the men to fi ll their larders with tinned food because it would be a long strike.  Eventually, the Corporation caved. Once they got the mess, however, it still wasn’t quite plain sailing. “We had a woman who used to look after the mess. She had a fancy for George O’Dowd,” says Harry. “George fell in love with a retired schoolteacher. And when she heard that, there was skin and hair flying!”

Harry’s tireless efforts on behalf of his colleagues and peers – which included reducing the retirement age for the city’s firefighters – didn’t cease when he left DFB in 1963 to join the Corporation Rents department, a job which provided a more stable life for Harry and his young family, along with an improved salary. His son Brendan recalls a story of Harry standing before a judge in the case of a tenant in arrears. Despite Harry working for the Corporation, he was pleading on behalf of the tenant, which perplexed the judge. Looking back, it’s clear that Harry’s life was one of dedication – to his family, his colleagues in Dublin Fire Brigade, and to his lifelong principles.

“I believed in the worker getting his right to speak, to criticise whatever was chosen for him. I didn’t believe in a man being too quiet, and not allowed to speak his mind. So I spoke up,” he tells me, his voice suddenly strong. “I stood up on a few occasions and I spoke to the whole lot of them [his colleagues]. I would have a go at them – ‘we can’t be falling out with ourselves, it is important that we unite. Unity is strength, we must stand together’.”

As with all of his tales of his fascinating experiences, Harry sums it up best himself. “It was quite a chequered life,” he says with a characteristic smile.