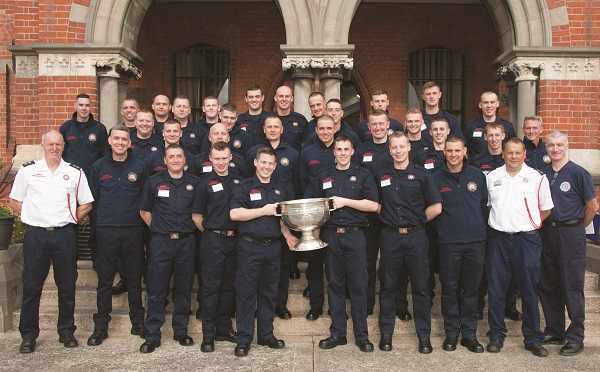 Recruit Class 2/2016 participated in the passing out parade held in the OBI last October.

Dublin Fire Brigade welcomed 50 new recruits into its ranks on October 6th last, as Class 2/2016 successfully completed their 15 weeks of training and passed out from the DFB training centre in Marino. The ceremony was attended by the Lord Mayor of Dublin, Brendan Carr, Dublin City Council Assistant Chief Executive Brendan Kenny, and the Mayor of South Dublin, Guss O’Connell.

Over the 15 weeks the recruits completed more than 37,000 combined hours of training at the hands of 60 DFB specialist instructors, complemented by instructors from An Garda Síochána, Dublin Bus, Renault Trucks and Luas. During the event they showcased their impressive range of training, covering a wide variety of skills ranging from working with BA sets and swift water rescue to dealing with road traffic collisions, Hazmat incidents and emergency first response.

Speaking on the day, Lord Mayor Carr noted the city’s pride in witnessing another cohort of highly trained firefighters beginning their new careers. “We are proud to have trained yet another class of recruits this year over the past 15 weeks. The calibre of the recruits passing out is a testament to the hard work and dedication of the instructors and of the recruits themselves,” he said. “Dublin Fire Brigade provides a vital service for the city and county of Dublin and I have no doubt that all new firefighters joining the ranks of Dublin Fire Brigade will continue to uphold that proud service.”