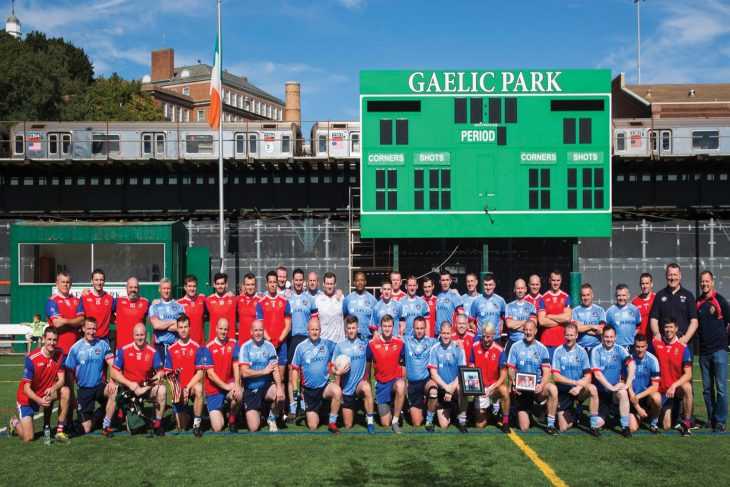 The DFB GAA team’s trip to New York was an enjoyable but poignant event.

October saw the DFB GAA team rekindle their friendly rivalry with the Fire Department of New York, with 39 members travelling to the US to take on their FDNY counterparts in a match at Gaelic Park. The visit included a lot of action both on and off the pitch, with the feedback from the trip extremely positive, and following its success, will see the FDNY visit Dublin in 2021.

The tie’s origins came out of the idea of solidarity and brotherhood within fire services worldwide, Senan Moylan, a Sub Officer at Tara Street station, tells me. “After 9/11, the then Lord Mayor of Dublin, Michael Mulcahy, thought it would be a very good way of offering support and showing camaraderie to have the DFB and NYFD teams meet up and play,” he tells me. “The trophy is called the Lord Mayor’s Trophy, because it was his brainchild. The NYFD have always had a GAA team and it is quite strong, and we first managed to visit them to play a match in 2002.”

That visit was followed by trips in 2004, 2006 and 2008, with the FDNY coming to Dublin in 2003, 2005 and 2007, before the financial crisis in 2008 made it too difficult to finance. “That meant interest died off again for a few years,” Senan explains, “but last year, the Northern Ireland Fire and Rescue Service somehow managed to get the use of Croke Park to play a match to commemorate 100 years of their Fire Brigade Union. They asked us to play, which was great, but they also invited a few of the NYFD team to come over for the event, and during the course of the evening, their main organiser, Battalion Commander from the Bronx, Eddie Boles, asked if we would be interested in coming over again in 2019.”

Senan and the others didn’t hesitate. “As soon as we spoke, literally in the dressing room after the game, we got everybody together – it’s difficult to get us all together because we are spread across all stations and Watches – and we arranged to deduct some money from wages to save towards the trip. That gave people an incentive immediately. It was a small enough amount, with a larger deposit in January that sealed your place on the trip.”

With everyone on board, plans could begin in earnest, and the trip was extended to take in the 9/11 Memorial Parade. “We wanted to make the effort to go to the parade, because it is a unique occasion and a lot of the lads wanted to see it,” Senan says. “We were in full uniform, and the whole thing was very impressive.”

The extra day also meant the team could play a warm-up match before facing the FDNY. “We went up to Rockland GAA in upstate New York – a very impressive GAA grounds – and they gave us a tough but very enjoyable game on the Thursday,” Senan says. “It was great to blow off the cobwebs before the big game on Saturday. A few of the lads struggled, but it was a great occasion and they looked after us really well. We had a few speeches and we gave their manager a small plaque to show our appreciation for their time and for taking care of us so well.”

Apart from taking part in the 9/11 Memorial Parade, the GAA team were shown tremendous generosity by the FDNY team, who brought them around to see the sights, including the 9/11 Museum, plus more than a few local hostelries.

“A lot of the lads went to see the NEW York Giants play, and the NYFD organised the tickets. The rest of us met up with them afterwards and had a great evening,” Senan tells me. “Even the hostelries around Times Square where we were staying, a lot of them are Irish-owned, and they looked after us really well. A lot of lads went and did the usual sightseeing in their free time, but overall, we were looked after so well. We were picked up from the airport, brought on excursions, brought to the game. It was the first trip for some of the lads, and it was definitely an eye opener for them, and they are determined to look after the NYFD when they come over here next.”

I have to thank their GAA President Billy Nolan, and both Eddie Boles and Barry Annette, for organising everything so well. The organisation for the match and our excursions on the trip wouldn’t have been possible without them. We hope to repay their kindness when they come over here in 2021. 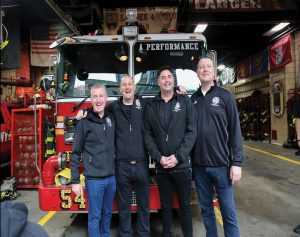 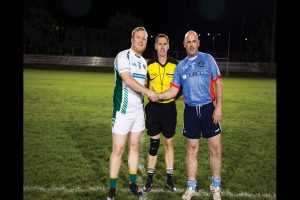 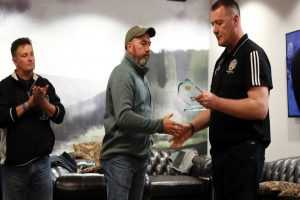 The main event, however, was on the Saturday at Gaelic Park, and it turned out to be a very close game. “It was a very hot day, and they had a very good team out for the occasion,” Senan recalls. “We had pulled away towards the end of the match, but maybe a few managerial decisions meant they got a very late goal to level the scores. It was good because we didn’t win, we didn’t lose, and we all enjoyed it. We told them we would like them to keep hold of the trophy, and invited them to come over to us in 2021, on the 20th anniversary of 9/11.”

Though previous matches here have taken place at Parnell Park or Senan’s local club St Vincent’s in Marino, there are hopes that this time they might be allowed to play at Croke Park. “That will take a lot of work, but it would give them a lot of incentive to come over,” Senan says, “and there was a huge response to the game against NIFRS last year, so we will have to wait and see. It would be a great occasion for them to come over and play on the hallowed turf, and for us to take back the trophy!”

Before both games, a minute’s silence was held in honour of S/O Adrian O’Grady, a stalwart of previous trips with the GAA club who was scheduled to take this trip before his passing away. “Our PRO from previous trips, D/O Paddy Rogers, unfortunately passed away in 2016, and another stalwart of the trips and the GAA team, a good friend of mine Robbie Kane, passed away in 2015. I know both of them would have been on this trip,” Senan says,” but this trip was dominated by the absence of Adrian O’Grady, there’s no other way of saying it.

“A lot of the NYFD lads were very appreciative of the situation, and some of them knew him very well. I knew he was really looking forward to the trip, because I had spoken to him just a couple of nights before. He was to be our PRO for the trip, was going to do the speeches. Then we got the news the night before the trip.”

As with the match at Rockland, a minute’s silence in honour of Adrian was held, with both sides wearing black armbands. Adrian’s Number 8 jersey he had worn as captain of the team on the 2002 visit was laid out in the centre circle, with a framed picture of him being included in all of the team photos, and a small video was recorded to mark the occasion.

“We just had to mark the occasion for Adrian, because so many lads knew him very well, including myself,” Senan tells me. “I would have played against him when I played for St Vincent’s and he played for St Anne’s, before we even joined the Brigade. So, I knew him quite well, through both the GAA and the job. 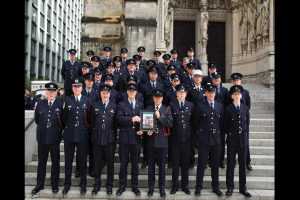 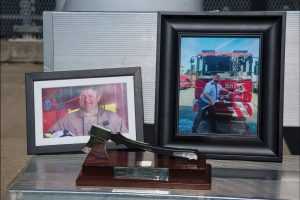 “Adrian was a mountain of a man, and not just because he was brilliant at his job. He was so well respected, and he is an awful loss, not just to the lads he worked with in his station in Tallaght, but to the DFB in general, because he did so much work in the background with CISM. He will be sorely missed.

“As soon as we got over there, we got those pictures of him framed and brought them with us everywhere we went. He was with us in every group photo, both literally and metaphorically, in that he was in all of our thoughts throughout the trip.”

Trips such as this are of vital importance to the DFB GAA team. “They are very important,” Senan agrees. “It was a great way for the lads to get to know each other, when ordinarily they wouldn’t get to see each other because they are on different Watches in different stations. We had retired members on the trip, a good few lads who are new to the job, so there was a good range, including a father and son, with Vinny and Conor Carton getting to play together, and everybody got on really well. Some of the lads who had never met before came back as best friends. The craic and camaraderie were brilliant, and I have to say it was as good a trip as I have ever been on with the DFB.

“I got messages of thanks from everybody when we got back, with a couple of the lads saying it was the best six days of their lives, so that was great to hear. But it is also important to have trips like this because it provides something different, it gives people something to look forward to.”

While each member of the team paid for their six-day visit, Senan is also grateful to their sponsors, who helped to make the trip so enjoyable. “The support we received from our sponsors DUBCO and Cornmarket was great, but particularly the support from the DFBSSC,” he tells me. “The committee gave us a generous grant, which helped make the trip much more enjoyable. We wouldn’t have been able to do as much as we did without their support, so I am very grateful to them. We hope it continues!”