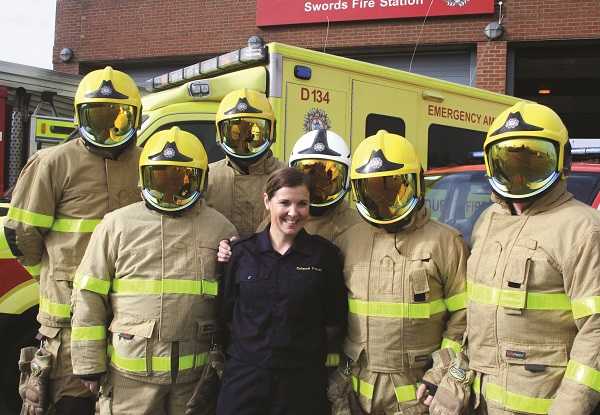 Above: Joanne Doyle with crew members in Swords.

Lebanon. Liberia. Chad. The Golan Heights. Swords. One of these is not like the other. The latter, along with Finglas and Tara Street, is where advanced paramedic Sgt. Joanne Doyle – a non-commissioned officer (NCO) with the Defence Forces – spent the best part of a year attached to Dublin Fire Brigade while completing her AP internship. Joanne is usually based in the Defence Forces Training Centre in the Curragh, Co Kildare, but her drive to improve her skills within the medical and paramedic fields have seen her career take an interesting tangent.

“I joined the medical unit earlier on in my career – I liked the medical end of things. I did a paramedic course in 2005 – all of the trips that I’ve completed overseas have been from a medical perspective. The opportunity to join the advanced paramedic course came up after my return from the Golan Heights, so I thought it was a good opportunity and decided to do it,” she explains. Joanne’s background is in training, and she taught in the medical school in the Defence Forces training centre for a number of years. She was promoted several years ago to the rank of sergeant, and is now in charge of the outpatients department for the training centre. “It deals with occupational medicine, primary healthcare – any soldiers presenting sick, for annual medicals etc.,” she says. “I still teach in the Defence Forces and you’re still expected to be a soldier as well as a paramedic. I have been trained in different spheres, not just the medical aspects. In that respect not every day is the same – no more than working on an ambulance here! Every day is different.”

All Defence Forces recruits follow a similar path – 17 weeks of basic training, followed by 3 Star training, and specialist training courses at a later stage. Joanne always had an interest in further education and set her sights on joining one of the core units – staffed by soldiers with a specialised skill. Her first step was to complete a ten-week military medical course in the Curragh followed by ambulance-based skills, including the use of a defibrillator. In 2005 she undertook a paramedic course with the National Ambulance Service, learning skills that would stand to her on a number of overseas missions. Deploying overseas with other United Nations peacekeepers can be an interesting experience, not least because you have an opportunity to work with people of different nationalities and backgrounds and see how they approach certain challenges or situations.

“When I was in Syria I worked with Fijian soldiers. A lot of them were civilians who were contracted in to work for the army for two years – they spent two years overseas. They come with huge clinical backgrounds,” says Joanne. “The two types of missions that we do are peacekeeping and peace enforcement. Normally all personnel are based in a camp and the situation would dictate whether you would do a ten-day patrol or whether the area needs to be patrolled. But everything that leaves the camp, such as patrols, there’s always an ambulance and there’s always a doctor. Sometimes you’re just based in a camp looking after the medical welfare of the personnel – there are always slips, trips, falls, different types of injuries. Spending six months overseas, people get sick or they get injured. [But] you’re still a soldier, so you’re still carrying a weapon, you just carry all your other items and a medical bag [too].” 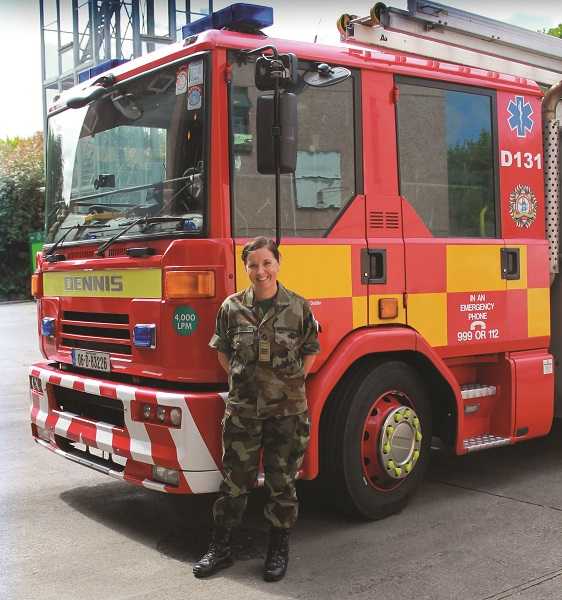 BACK TO THE BOOKS

It’s more than two years now since Joanne first began training as an AP through University College Dublin (UCD), having decided to take the next step in her career, a process she describes as challenging, though made easier by the Defence Forces’ policy of allowing students like Joanne to focus on their studies. Although her work in the Defence Forces won’t make use of her skills as often as a shift in Dublin City might, she felt that the ability to make greater clinical interventions, particularly in difficult situations overseas, would stand to her and those under her care.

“You need to be able to provide interventions, give some sort of medication for pain relief, utilise a more advanced set of skills to provide more clinical benefits to the patient that you’re dealing with,” she tells me. “If we deal with Irish soldiers that are injured, they usually aren’t injured badly. But we don’t always have helicopters to evacuate them. If I need to move a patient you don’t always have that facility, so you’re managing the patient for that bit longer – you could be waiting a few hours before air support arrives. Here you’ll get an ambulance within a reasonable length of time; you don’t overseas because the operational situation is obviously different.”

Her first contact with Dublin Fire Brigade occurred during the Block 3 internship, a six-week stint on the road supervised by a doctor or professor in medicine. Once she had passed her exams, Joanne was keen to complete her postgraduate internship with DFB, realising that it would provide her with a wide range of experiences and learning on the job, not to mention a rank structure and a team spirit ethos similar to that of the Defence Forces. Some informal enquiries were made, followed by a formal meeting – the issue of indemnity from the Department of Defence had to be resolved among others, although Joanne describes this process as ‘straightforward’.

“I thought that Dublin Fire Brigade was a much better option for the volume and variety of calls, and exposure to different types of clinical situations. My interaction with the Defence Forces was limited for the year, because the Defence Forces will let you gain your exposure and your experience for 12 months before you return,” she explains.

Her initial point of contact in DFB was Third Officer John Keogh, a former member of the Defence Forces himself, who investigated the possibility of Joanne coming on board for the year and worked with EMS Support Officer Martin O’Reilly to sort out indemnity, insurance cover, Garda clearance and the myriad administrative issues that had to be overcome. During her 12-month stint Joanne worked on C watch, primarily between Swords and Finglas, with weekly shifts on the AP car based out of HQ and several weeks in No 8, broadening the range and type of incidents to which she responded.

“Martin O’Reilly dealt with my schedule. He was absolutely fantastic, I always received it weeks in advance,” she says. “I always knew where I was going – it was very professional.” Those three stations were chosen to give Joanne a broad overview of the incidents DFB APs and paramedics deal with on a daily basis, with different population profiles and risk factors in each location.

“We tried to give her as much scope as we could to get a good view of everything that was happening. Her primary location was in Swords fire station with C watch out there, which was a great benefit to her at the start because we had three APs on the watch. Any time she was responding on the ambulance, more than likely she was going to be with an already qualified and experienced AP,” Third Officer Keogh explains. “We had a few priorities when we went to introduce her to the station, [including] the local protocols that DFB has as regards dealing with RTCs, medical cases, any cases where the fire tender is involved. Additionally, there was a recruit class going through the training centre at the time so we were able to slot her into several modules that provide recruits with an overview of the incident command system that we operate, and how the officer falls into the equation.” 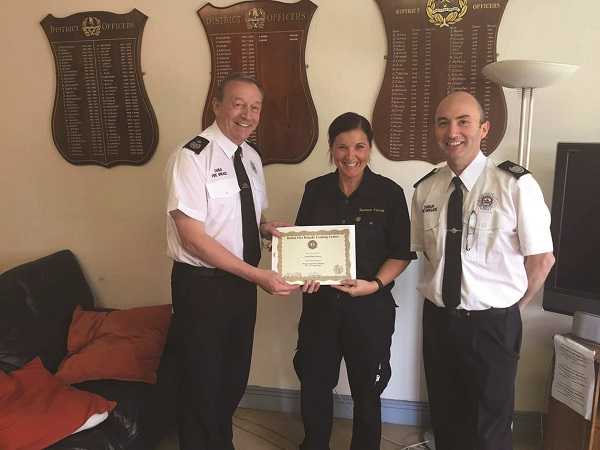 Joanne has since completed her year with DFB, which she refers to as one of the highlights of her 19 years with the Defence Forces. She returns to a perhaps less hectic life at the Curragh where any given day could see her leading driving courses (she’s also a driving instructor), joining heavy armament shoots in the Glen of Imaal in case of injuries, or simply tending to the medical needs of personnel on the base. “It’s an absolute adjustment!” she says with a smile. “I’ve been out of the Defence Forces for two years on and off between being in UCD and working with Dublin Fire Brigade. I will work as an AP but I won’t work on a daily basis on a frontline ambulance.” Still, Joanne brings back a wealth of experience having had the chance to practice her newfound skills in a more clinically busy environment than she would experience with the Defence Forces, and to shadow and work with DFB APs who have been practising for a number of years.

“In her time here she probably spent more time on the AP car in DFB than any of our own APs, so she received huge exposure to incidents. She’s going back to a job now where she won’t do anything like what she’s done over the past year. It was a great asset for her, and a great asset for the Defence Forces to have that kind of background going back into their service, a good understanding of how the civilian EMS side operates,” says T/O Keogh, who notes that by the end of her year with DFB Joanne was well-known across Foxtrot District, deferred to as the clinical lead if she was the only AP on site. “She also got on really well [with the crews], she got involved in all of the social events that were run between Finglas fire station and Swords fire station. She was fully involved really with everything that was going on in the station, and they treated her just like one of the crew.”

The relationship with the Defence Forces also continues to blossom – a second AP has since begun his AP internship with DFB, a good sign of things to come. “We’re hoping that continues with Darren McDaid – he’s going to be with us for a year. Hopefully we will continue that development between ourselves and the Defence Forces because it’s great to be able to do it. We’d love to be able to facilitate it more,” says T/O Keogh, a sentiment echoed by Joanne.

“The Defence Forces is delighted because they would like to have a relationship with Dublin Fire Brigade and to keep that relationship open,” she tells me. “I absolutely loved every shift with Dublin Fire Brigade. I’ve met brilliant people, I’ve made great friends. I think Dublin Fire Brigade has some of the best APs – there was always something to learn, as every clinical case is totally different. It was brilliant to work with really experienced advanced paramedics who have seen everything and done everything. It was a great opportunity to work with them. If I wasn’t retiring in two years I would definitely consider applying for Dublin Fire Brigade. I think it’s a great opportunity for people who have any interest in the EMS or the firefighting side. I think it’s a great career.”