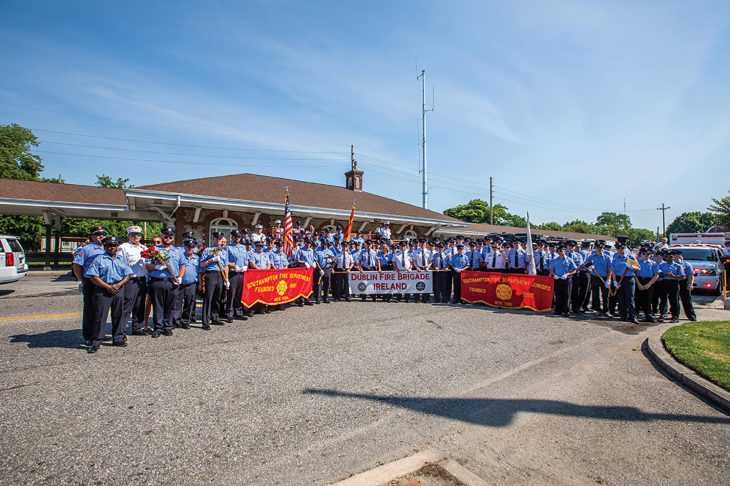 The time finally came in July for the Dublin Fire Brigade to fly out to the Hamptons in New York to celebrate the 4th of July with their US counterparts in the Southampton Fire Department. And what a trip it was.

The group for this much-anticipated trip consisted of 38 members.

“It was a very diverse group,” DFBSSC committee member and co-organiser S/O Declan Rice says. “We opened it up to all DFBSSC members, and we had people from all ranks, from Assistant Chiefs John Keogh and Greg O’Dwyer all the way down to the newest FF/Ps coming into the job, so we had a great spread of ages, a great spread of stations represented, and everybody bonded really well.

“The possibility of the trip was first raised over a year ago, but when Southampton FD came over for St Patrick’s Day, we got to talk to them in detail about it and saw that it could be a reality,” Declan says. “From that moment onwards, planning was non-stop.” 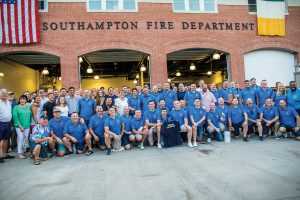 From the moment they landed until they got back on the plane home, the DFB group enjoyed amazing hospitality from their hosts – something everyone was eager to mention.

“The thing that stood out was that it wasn’t just the firefighters in Southampton who did everything for us and were extremely welcoming throughout the trip, it was their families too,” Declan says. “But also, the greater community of Southampton made us feel so welcome.”

This hospitality extended to a full itinerary of activities. Upon arrival on 3 July, the group was escorted by fire engines to their lodgings at Stony Brook College and then Southampton Fire Department to a rapturous welcome.

A sombre note was rung as the group honoured the memory of retired FF/P Gerry Sweeney, whose funeral was taking place back home.

There were a few official greetings to be made, and formal presentations, including an Irish flag gifted to the DFB by Joe O’Dea and the Southampton Fire Department. The flag, which Assistant Chief Fire Officer John Keogh received on behalf of the DFB, was first flown outside the old Hotel Commodore on 42nd Street in New York to greet Eamon De Valera on his State visit in 1948, and was flown every year on St Patrick’s Day thereafter.

Joe O’Dea’s father was a native of County Clare and followed the career of De Valera, who represented Clare in the Dáil after 1916, and managed to purchase the flag in the 1970s when the hotel closed its doors, to honour his father’s memory. Proud of his Irish heritage, Joe O’Dea felt it would be fitting to give the flag to the DFB, in the hope they could give it a suitable home.

This was just one example of the incredible generosity and warmth of the people the DFB met on this trip.

“I was honoured to receive the flag and framed document detailing its history,” A/C/F/O John Keogh says, “and to give assurances that it will hold pride of place in the DFB museum.”

He too was overwhelmed by the welcome received from the Southampton FD.

“My abiding memory of the trip was the hospitality of our hosts,” he tells me. “Their generosity had no bounds. We had a ball. Good company, good craic, and plenty of laughs.” 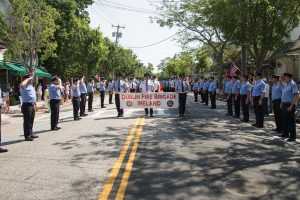 THE 4TH OF JULY PARADE

The main event, of course, was the unforgettable 4th of July parade to celebrate American Independence Day.

Because of his military background, Sub Officer Brian Gunning was tasked with organising the DFB’s role in the parade, at which they would march alongside the Southampton FD.

“We are used to formal parades for things such as St Patrick’s Day and for funerals, but when we went over there it was less formal, and it suited the spirit of the occasion,” he tells me. “We were marching in our uniforms, but that was the only formal part of the trip. There were so many people coming up to us and saying thanks for being there. At St Patrick’s Day, you have barriers all along, keeping people back, but there were no barriers at this, so it was really welcoming. For me, the highlight of the entire trip was the parade, it was a real eye opener.”

On top of that, DFB managed to win top prize in the Fire Department Marching Unit competition, outshining their hosts.

Apart from the parade, the trip also included many other events and outings to keep the group entertained.

“As a sports and social club, we wanted to make sure we took part in a range of activities,” S/O Rice tells me. This included a shooting competition, which the local police arranged at their training grounds, a sea swim relay competition, a softball competition, and the parade competition. “There was a lot on to keep us all occupied, and to have some friendly competition with our hosts, and I’m happy to say we came out on top in most,” he adds.

“They did have a bit of an advantage in the softball, but it was the only competition that they won,” Declan says. “It’s good that they won something, so it wasn’t a whitewash.”

Among the activities were two golf outings, which Sub Officer Brian Gilbert recalls as his favourite memories of the trip, and with good cause. He and the rest of a DFB team were brought to Southampton Golf Club for what was billed as a mini Ryder Cup, which the ‘European’ team won.

“It was great fun, and there was a fair bit of heckling and banter, gentle words in their ears – hope you don’t mess up this shot, and all that,” he tells me. “That was a great day, and we are already talking about the rematch when they come over here next time.”

The golf didn’t end there for Sub Officer Gilbert though, as he was unexpectedly invited to play at the prestigious Shinnecock Hills course, home of the 2018 US Open and a course where all of the world’s greats have played, courtesy of Chief Alfred (Alfie) Callahan, who is a member.

“Myself, Barry Wilde and Damien Nolan jumped at the chance – to play somewhere like that was an absolute dream because you just don’t get the chance to do that. The three of us were like children jumping up and down.”

A shot he puts “down to luck” saw Brian land a par three on the notoriously difficult 11th hole, which he says he will remember forever, but the experience of playing this course will stay with him too.

“Walking around the clubhouse, there were loads of photographs of golfing greats such as Jack Nicklaus, Seve Ballesteros, Tiger Woods, and to be in the same locker rooms those people used was a great experience. It was a real once in a lifetime opportunity. I’d like to thank the committee for organising the trip. Dan Fynes, Declan Rice and Simon Finglas organised everything so well. Thanks too to Jason Poremba, who brought us out to Southampton Golf Club, and to Alfie for bringing us to Shinnecock Hills.”

It wasn’t just those who walked in the same footsteps as Tiger Woods who enjoyed the trip.

“While a lot of planning was involved, there were a few surprises too,” S/O Rice tells me. The 4th of July parade itself was one of those surprises.

“Towards the end of their parade, they stood on each side of us and we marched through their ranks, with them saluting us as we marched through,” he says. “I have never seen it done before, and it was one of those memorable moments. It went down so well we are going to rob that idea off them and try to replicate it if we can when they next visit!”

Another surprise was a visit to a traditional American carnival on the invite of the nearby North Sea FD. Attractions at the carnival held as a charity fundraiser included a softball dunking pool, and when Assistant Chief Fire Officer Greg O’Dwyer volunteered to sit in the dunking chair, everybody wanted to have a go, and helped raise a lot of money by buying more than a few shots.

“Fair play to Greg for doing that, and for the North Sea FD for bringing us down there,” Declan adds.

There was of course a fair amount of celebration and revelry involved. “Late finishes, let’s put it that way,” Declan says. “But our hosts were great in this too, and always made sure that we all got home safe.”

“We will be hard-pushed to match them next year,” he adds. “They keep raising the bar.”

The trip was enormously successful, with every member who went echoing this sentiment, but it also underlines the importance of the DFBSSC’s work in providing an outlet for DFB members.

“There will be a lot of interest in the next trip because this one brought a lot of craic back to the job, and increased morale a lot,” Declan says. “Even for St Patrick’s Day next year, all of the members on the trip are now enthused to do more for people who come over, because they have seen the benefits of it from the other side.

“We are hoping to make a trip abroad every other year. We don’t want the craic to stop, we want to build it up, and trips like this really do help with that.”