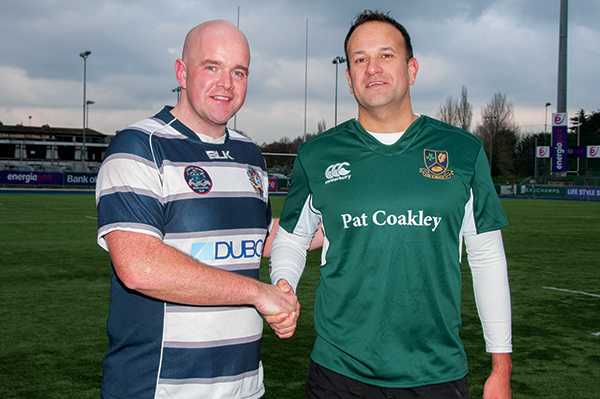 The DFB Rugby Team met an Oireachtas XV in a fundraising game for Suicide Or Survive.

The DFB Rugby Team played out a close-fought match against an Oireachtas XV on 24 November, and though they couldn’t come away with a victory, the real winner was the Suicide Or Survive charity, with much-needed funds raised for them on the day.

Having beaten the Defence Forces and our friends in the Northern Ireland Fire and Rescue Service this year, it was time for the newly-reformed DFB Rugby Team to take on the Government itself at Donnybrook Stadium.

Suicide Or Survive focuses on breaking down the stigma surrounding mental health issues, and ensuring those affected have access to quality recovery services.

As Firefighters and Paramedics, we are often the first help to arrive after a person has, has attempted to, or is thinking about taking their own life. We see first-hand the devastation that suicide or mental health issues unleash on a family. We, too, recognise that under our uniform we are people, and are also as vulnerable as the next person, so this match was an important event.

Before a ball was kicked, bucket collections took place in St Stephen’s Green Shopping Centre on 27 October, and in the city centre in November, and this was added to by the donations made at the match.

Unfortunately, on a cold and dull November day, the combined Dáil and Seanad XV came out on top in a closely fought 7-0 win, with a youngster called Leo Varadkar playing alongside TDs, senators and government officials. Former Leinster and Ireland prop Mike Ross also togged out and played a section of the match for each team, while DFB Tallaght’s Sara Phelan, club captain with Clondalkin, and the Oireachtas team’s Mairead Carty, club captain with Navan, were also notably getting stuck into their male counterparts.

The game, which was free to attend, kicked off at 11.30am, and was ably overseen by referee Su Carty, the former player, coach and now IRFU representative to the World Rugby Council.

Played over four quarters, there were a few other rule variations that allowed for team switches and for veterans to tog out and be a part of what was a day of fun and fundraising.

The only scores of the closely contested game came when the Oireachtas XV managed to notch up a converted try by captain Senator Neale Richmond before the close of the first half, with the DFB team coming close to parity a few times but unable to break through themselves.

After the game, a reception lunch took place in Old Wesley Clubhouse, with politicians, senior DFB officers family members all coming together to raise awareness for mental health wellbeing and suicide prevention.

DFB Rugby Team Chairman Keith Mason said: “It was a really enjoyable day. In the end, the score didn’t matter. What was important was to keep the charity in mind, raise money, and have some fun.

“We got to play a good game, got together as a team, and kept the social side of our club up, but the main focus was to raise money for this great charity.”

The DFB Rugby Team would like to thank all who took part in this important fundraiser, including the Dáil and Seanad team, our own players, ref Su Carty, the fans, the DFB Sports and Social Club, sponsors on the day Sky Ireland, the High School Rathgar for supplying us with new Gilbert balls, Ken O’Dwyer of Flashpoint Medical Systems for supplying water bottles and cones, the fundraisers and volunteers from Suicide Or Survive.

If you wish to support Suicide or Survive you can do so by going to www.suicideorsurvive.ie/how-to-donate/