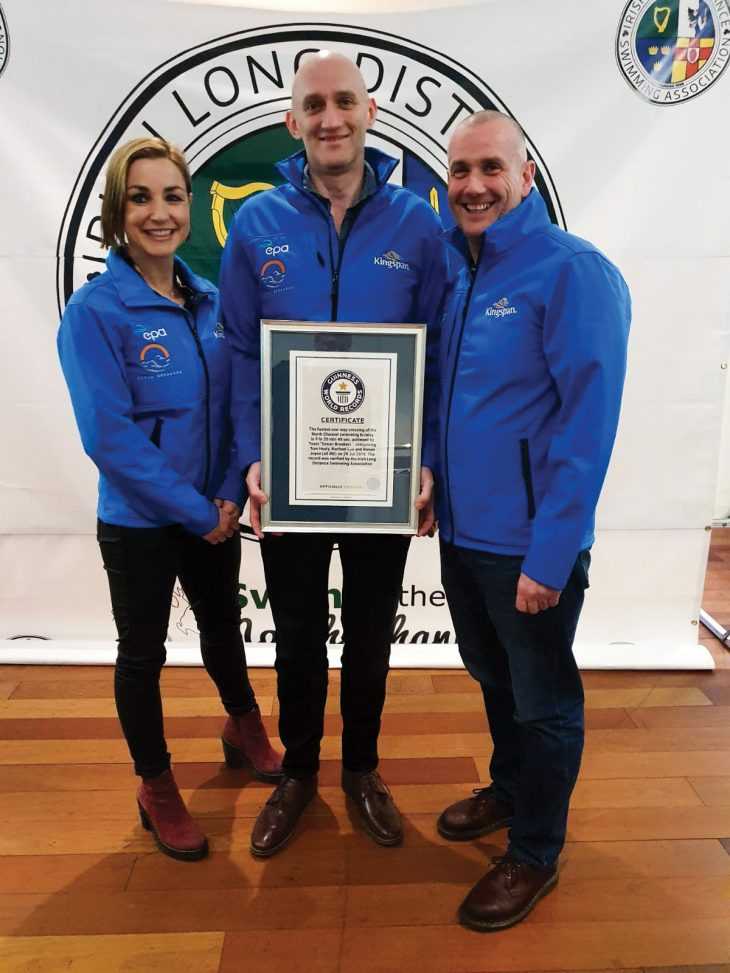 FF/Ps Rachael Lee and Tom Healy were part of a three-person team to make Guinness World Record swim of the North Channel.

Having broken the world record for the fastest relay swim of the North Channel between Northern Ireland and Scotland last July, DFB FF/Ps Rachael Lee (Phibsboro) and Tom Healy (Dún Laoghaire), along with their sea swimming colleague Ronan Joyce, received their official certificate from the Guinness World Record organisation in March, as verified by the Irish Long Distance Swimming Association.

The trio, known as the Ocean Breakers, became the world’s fastest one-way three-person relay team to swim from Donaghadee, Co Down, to Portpatrick in Scotland by completing the 34.5km swim in nine hours and 20 minutes. The previous record was set in 2012 when US relay team The Machine Men finished the course in 10 hours and 18 minutes.

FF/P Lee said after the swim, which they attempted in an effort to raise awareness of sea pollution: “It took us to the absolute brink of our capabilities, both mentally and physically.”

Speaking days after receiving the official recognition for the World Record, FF/P Lee, who already holds the record for the fastest solo crossing of the English Channel, told me: “It’s a great achievement. I mean, there are people who have Guinness World Records for the number of Malteser they can fit in their mouth, so there are loads of different records you can have, but because this was such a tough swim, and because we trained really hard for it, we are just so proud. To get the record certificate and the plaque was just brilliant, we are absolutely delighted.”

That training involved not just staying supremely fit, but getting used to the extremely cold conditions. “Ordinarily we would swim in water of around 14-16 degrees, but we knew for this one the water would only be around 10 degrees,” FF/P Lee tells me. “So, we trained in water of around 12 degrees. It was tough going because you can’t wear a wetsuit for these record attempts, so we just had to get used to swimming in such cold. It’s just a matter of sucking it up.”

The swim itself proved to be, as expected, extremely tough both physically and mentally.

“Your body will quit once your mind tells it to,” FF/P Lee tells me, “so if you can keep your mind going, your body will follow. We just had to tell ourselves to keep going. Also, we’ve all done big swims before, so we knew we could do it, and we were working with a great team, we were sponsored by Kingspan and the EPA, so we had a lot riding on it and didn’t want to mess it up. That and the slagging we would have to deal with if we didn’t succeed.”

With FF/P Healy starting the relay, the team took three turns each to swim with two-hour rests on the safety boat in between.

“Tom went first because at the time he was the strongest swimmer and was coping better with the cold,” FF/P Lee says. “That meant him having to dive in off the boat, swim around 400 metres to the start of the race, then get up on a rock and dive in from there.”

The cold provided an obvious but serious challenge. “It was very hard to do because you do slow down in the cold water,” FF/P Lee says. “Your muscles get cold and stiff, and it’s very hard to swim in such hostile water.

The necessary support came from safety paramedic FF/P Kevin Conroy from D Watch in Finglas, as well as FF//P Lee’s mother, both of whom were of great assistance throughout the endeavour.

“It was great to have them on board the safety boat, and you really do need that support,” FF/P Lee tells me. “When you get out for a two-hour break you are shaking horrifically, it was like having a seizure, uncontrollable shaking for at least an hour,” FF/P Lee tells me, “which makes you even more tired than you were. You had to try to warm up, get something to eat into you, and then it was time to get back in the water again. That was very tough.

“You are so cold that you need somebody to dry you, because you are too cold to do it yourself. You need help getting clothes on, even to hold a cup of tea for you because you are shaking so much, and even to just put an arm around you to try to get a little bit of warmth into you.”

Calm waters turned very choppy as the swim went on, but having taken three turns each and upon reaching the nine-hour mark, FF/P Healy dived in for the final 20-minute stretch, with FF/P Lee and Ronan Joyce joining him for the last five minutes so they could finish the swim together, knowing the record time was in their sights.

“We knew we were close to the record and that the pressure was on,” FF/P Lee tells me. “When we were coming to the end FF/P Conroy was screaming encouragement, and although we were so cold, we were very focused.”

As well as the freezing water, FF/P Lee says that the hardest part of the swim was the sheer amount of Lion’s Mane jellyfish they encountered, which meant countless painful stings. “I knew there would be a lot of them,” she says, “but I can’t get over just how many thousands of them there were. It was horrific, I’ve never experienced anything like it. The guys in the boat were blowing a whistle and telling us to swim right or left to try to avoid the jellyfish, but sometimes you just can’t. When their tentacles are down it’s fine, but when the sun is shining, they go belly up and the tentacles just come at you from all angles. The water is 400 foot deep, and it is just a dark abyss below you full of these evil creatures. You are getting stung over and over again, but you just have to keep going and not let them stop you. A lot of people don’t finish the swim because of the jellyfish, or end up in intensive care, so we are delighted to have come through it.

“To have done it with my husband Tom and our best friend Ronan, with the support of my mother and our colleague Kevin, that just made it great.”

Next up for the trio is an attempt at the world record for the fastest relay crossing of the English Channel in August.