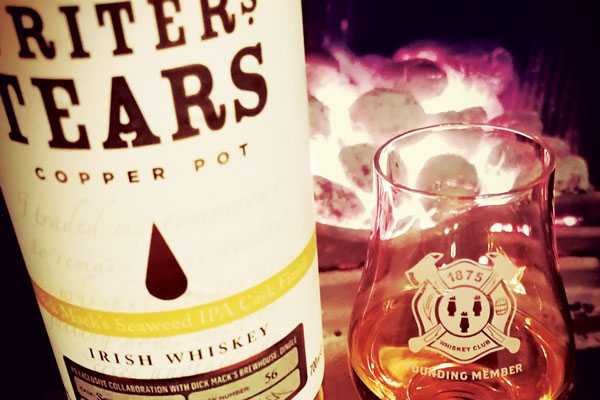 Lockdown has meant a lot of social club activity has been postponed or gone online. Despite this, the DFB 1875 Club, named after the Great Liberties Whiskey Fire of that year, is going from strength to strength.

“Membership has continued to grow steadily over the past few weeks and months, with word spreading within the DFB,” FF/P Brian Treacy, whose go-to whiskey is a Bushmills Black Bush or Power’s John’s Lane, tells me. “The longer lockdown goes on, the more people are looking for different things to do, and our online tastings via Zoom are an ideal thing to do at the moment. At the time of writing, it looks like restrictions are going to continue or get worse, so really the only way to keep the show on the road is to continue with the online tastings that people can do from home.

“It has been tough for the club because nothing beats going to your favourite pub and sampling some whiskey, but this has been a great way to overcome the boredom that can come with restrictions on movement, and provides a great way for us all to meet up, although virtually, and sample and talk about whiskey together. These tastings have been a big positive in a time of negativity.”

This positive was added to in June when the esteemed US podcast Whiskey Cast recognised the 1875 Club as their Whiskey Society of the Month.

Having organised a hugely enjoyable online tasting with the Dublin Liberties Distillery in April – probably one of the first online tastings done in the country – further tastings followed, including one with Teeling in May.

“We had originally organised with Master Distiller Alex Chasko to have a private tour of Teeling’s followed by a tasting, but that was obviously shelved for now,” FF/P Treacy says, “but the online tasting was very good.

“As part of our summer plan, we had looked at having tastings at several venues as well as walking tours with distillery visits, and all of that has now been put on the back burner but is definitely something we will be keeping in mind because there is some fantastic whiskey heritage to be had there. Getting into those distilleries in that historic area for whiskey production – Teeling, Pearse Lyons, DLD, Roe & Co – those will all be good days out, so when we can do it, and it’s safe to do it, I’m sure they will sell out easily.”

As well as being a very sociable event, these tastings involving experts in the field are also very educational. One held in October focused on age statements, with six whiskies ranging from three-year-old to 14-year-old on the table to see what the ageing process does to various whiskies.

Another tasting focused on whiskies matured in different types of barrel, illustrating the difference results when the spirit is finished in bourbon or sherry casks.

“This tasting was very interesting for me,” says FF/P Ollie Dunne, an ardent Teeling fan whose favourite whiskey is a Teeling Brabazon 3. “I’m very new to the whiskey scene, but the amount of information I got from tastings like this and from other members has been absolutely huge. If you have any kind of interest, and even if you know absolutely nothing about whiskey, they are a great place to start.

“There are so many different types of whiskey and you may not know where to start or what you like, but the tastings are a great way to try small portions of different types of whiskey to get a good variety of tastes. I found out very quickly that I like single malt, and I went down a rabbit hole of trying single malts, but then we moved on to a pot still tasting and that made me realise that I liked that too, whereas previously I would never have branched out to try another type of whiskey. 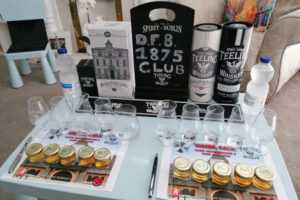 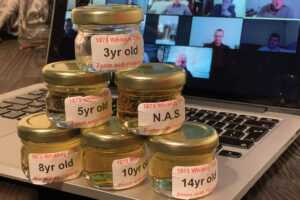 “The tastings are also done in a very friendly atmosphere with a lot of craic. Obviously, there is a big difference between meeting in person and doing the tastings over Zoom but it is still a very good, positive atmosphere. There are members from all across the DFB, and sometimes you are able to include a friend or family member, so it is very sociable.

“It is very interesting for me as someone who didn’t realise they liked whiskey. I have learned that I love whiskey, but its centred around the social side, where we can have a sip of whiskey at home and send a picture around to the group to start a conversation. It’s more than just having a drink, it’s about enjoying the taste and talking about it with like-minded people.”

In the meantime, plans are afoot for further 1875 Club ventures.

“We had to think of ways to keep people interested when some of our options were closed to us, so we started our cask programme,” FF/P Treacy tells me. “Through the Irish Whiskey Society and Dick Mac’s bar in Dingle, we were able to buy a share of a cask of Writer’s Tears from Walsh Whiskey, and we got about 40 or 50 bottles from that. It was a limited edition IPA seaweed cask from the old Dingle brewery and the whiskey was taken from it after 18 months, with a limit of two bottles per person available. That was a fantastic whiskey to buy into. Probably one of the nicest whiskies Walsh have produced.

“S/O Declan Rice did great work with personalising these bottles too, because he managed to get the number of the bottles to correspond with a number significant to a person, so for example someone in Dolphin’s Barn got either Bottle Number 21 or 22 or 24 because that was the call sign of the station. I got offered 81 or 84 because I work in Rathfarnham.

“That was sitting waiting for us during the heavy stages of lockdown, but we eventually got it in July. It was only because of the fact that one of our members was providing a course down in Kerry that we managed to get ours out, weeks before the Irish Whiskey Society got theirs.”

Ff/p Treacy adds: “We also have a share in a cask from Killowen, which will be ready in early 2021. We are also looking at doing something with Teeling or DLD – it is really down to finding the right entry point for the club. The cost for a full cask can be quite expensive so the cask share is a very good option.

“Then we are also looking at the possibility of merchandise such as polo shirts and tasting glasses that we could put the 1875 Club brand on, and they would probably prove very popular, and not just with our own members.”

Another great idea was the establishment of a bottle share group.

“We had a WhatsApp group set up purely for bottle shares so anybody who was interested could buy into a share of a bottle,” he says. “If a new whiskey came out, somebody would buy it but other members could buy a share of it – say a seventh or 14th of the bottle – so you would get 100ml, for example, and only pay for your share and the minimal cost of the bottle sent out to you.

“Rather than taking a pop on a !140 bottle that you may or may not like, you could buy into a share of that bottle and pay, say !14 for a smaller amount of it. If you liked it, you could always then go on and buy a bottle of your own. It’s a good idea because members can try something new and if they like it, it sends them on their own path to find the type of whiskey they really like, so it is all about learning about different whiskies and discovering your own personal tastes.”

This is particularly useful in the latter part of the year when in the run-up to the annual Whiskey Live event (sadly cancelled this year), a huge number of new whiskies are released. “I expect there will be a lot more new whiskies coming out,” FF/P Treacy says, “and there is going to be a big increase in our bottle share activity.

“A lot of distillers are innovating and making their product more accessible, and I think the bottle share approach is a great way to increase that accessibility further. With the current situation, the likes of DLD, Teeling, Bushmills, and many others, have had to become innovative, because they have had no choice, and we are embracing that innovation and finding new ways to share whiskey with our members.”

The online tastings have continued, with one held in November and possibly more to “keep us going up to Christmas” as FF/P Treacy says, and hopefully in the New Year those excursions will be possible.

“As well as visits to Dublin distilleries, we also planned on a trip to Dingle, but as with other things, that will have to be something we look at for next year,” FF/P Treacy tells me. “We are restrained by how quickly we deal with COVID and the restrictions. Fingers crossed we manage to deal with it as soon as we can and we can return to normality and do all the things we had planned for the club.”